The House voted yesterday to hold Lois Lerner in contempt of Congress.

Which means that the matter will now be referred to the Department of Justice. Which is captained by Attorney General Eric Holder. Who, by the way, is also in contempt of Congress.

has anything to do with the decrease in the country’s entrepreneurial zeal?

More businesses are failing now than are being created, a first for the American economy since the Carter era, according to a new study by the Brookings Institution. That has become even more true during the Obama “recovery” than during the Great Recession: 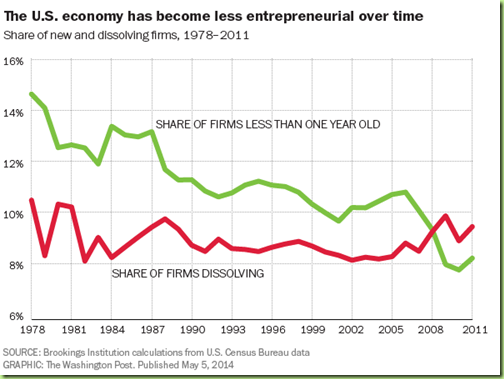 Amazing how many things we’ve begun to measure against “the Carter era” isn’t it?

Nah, I don’t think so either. Because being held in contempt by our political class wouldn’t keep a good entrepreneur down. There must be something else going on:

The steep drop came during the Great Recession, but that continued well into the supposed recovery, too. What happened during that period? Massive top-down regulation via ObamaCare and Dodd-Frank, and massive amounts of gimmicky Keynesian economics with short-term incentives and crowd-out “investments” in areas like solar energy. Instead of freeing capital for entrepreneurial purposes, the regulatory and tax policies of the Obama administration have choked off entrepreneurship.

There is some good news from the Brookings Report: "older and larger businesses are doing better relative to younger and smaller ones." You know – companies like GM, GE and Solyndra that are too big to fail, butt small enough to need corporate welfare. In case you’re keeping score, that’s crony capitalists 10, taxpayers -100.

Apparently in the Age of Obama, you really can’t build that yourself:

“Somebody else did that for you.”

The Kock brothers have not engaged in illegal activity but are repeatedly being villified by a U.S. Senator;
how absolutely tyrannical.

Well, the Koch brothers are responsible for the non-existant global warming. I’m reminded of Emanuel Goldstein from “1984”, got blamed for everything.