What’s up with all the brew-ha-ha over Mr. and Mrs.Claire Shipman’s commie kitchen icons anyhow? 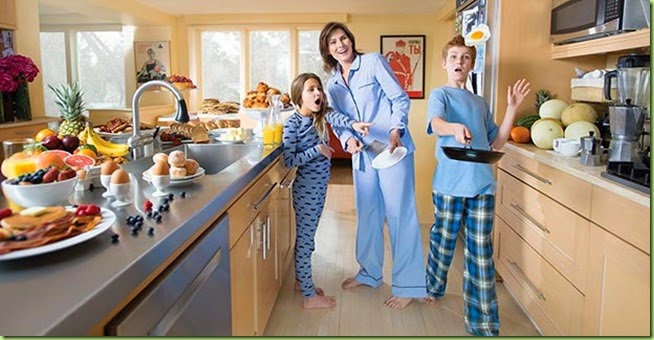 Flipping: it’s the first step in learning how to spin

There’s nothing odd about the commie posters in the kitchen. In case you didn’t know, Mr. and Mrs. Claire Shipman met and fell in love in Russia. So these are simply sentimental tchotchkes from those happy days. 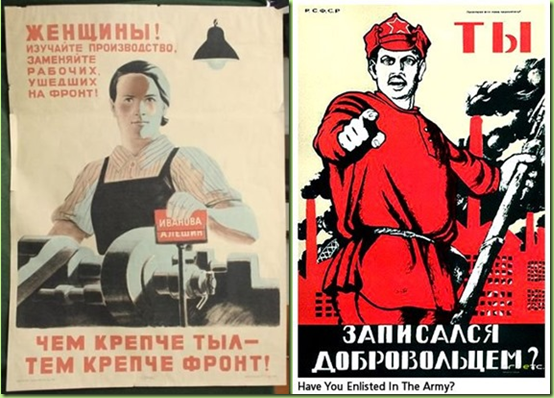 And as for the odd Photoshop in their home library: 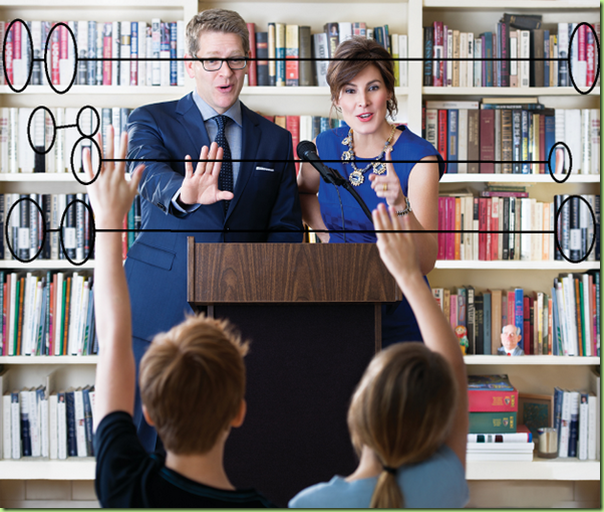 In my *ahem* line-of-work I really shouldn’t say very much about transimaging. Besides, everything in politics is photoshopped today. It’s a “huge” industry. if you get my drift.

For example, there was the infamous birth certificate that was “allegedly” ‘shopped by amateurs. 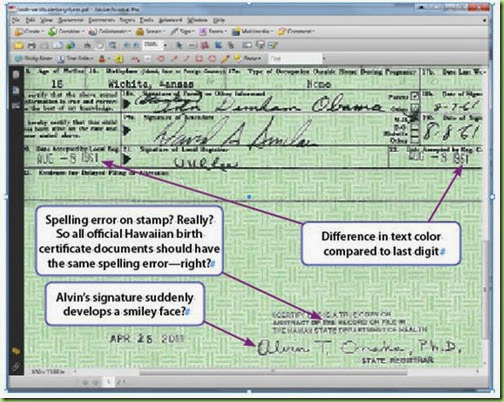 “In over 20 years of examining documentation of various types, I have never seen a document that is so seriously questionable in so many respects. In my opinion, the birth certificate is entirely fabricated.”  -Reed Hayes, certified document analyst

Big Guy himself even kidded about it just last week while chastising Republicans for repressing the vote.

President Barack Obama reminisced about the conspiracy theories surrounding his birth certificate during a speech at the National Action Network convention in New York City Friday afternoon. Obama referenced the doubts about his citizenship that led him to release a copy of his birth certificate in 2011, while criticizing voter I.D. laws that require people to present documentation like passports and birth certificates to vote.

"Just to be clear, I know where my birth certificate is," he added.

Obama then began to laugh.

Of course the BC was only the first of many frauds situations that have been professionally ‘shopped during BHO’s reign term. Here’s a brief recap:

Fast and Furious: The original purpose of Gunrunner was ‘shopped in order to provide a new mandate for implementing new gun controls. And besides, Bush started it.

Benghazi: ‘Shopped to appear to be the result of a bad YouTube movie and a bunch of thugs: “Was it because of a protest or was it because of guys out for a walk one night decided to go kill some Americans? What difference at this point does it make?”

Obamacare: The rollout was ‘shopped to appear as if the huge amount of traffic demanding Obamacare crashed the system, not the underlying inadequacy of basic programming. And then ‘shopped again on the backend to make it appear like a “huge” success.

NSA: The warrantless spying on individuals ordered by Eric Holder was ‘shopped to appear to be nothing more than a “meta-data” collection that threatened no one’s privacy and therefore did no harm. And Bush started it.

IRS: The illegal targeting of conservative groups for scrutiny was ‘shopped to add in a few liberal groups so it would appear fair and balanced. And Nixon started it.

Note that each of these phony scandals have often been attributed to deep,dark,nefarious political purpose or agency. However, I ask you to consider the Occam’s razor explanation:

A rule in science and philosophy stating that entities should not be multiplied needlessly. This rule is interpreted to mean that the simplest of two or more competing theories is preferable and that an explanation for unknown phenomena should first be attempted in terms of what is already known. Occam's razor is named after the deviser of the rule, English philosopher and theologian William of Ockham (1285?-1349?).

With all things Obama, it may be best to accept the simplest explanation, which is usually:

So help us out here. What have you noticed that on first blush might be considered a nefarious political ploy, butt in reality is just another example of Progressive stoopidity?

Share your story today with OFA. It’s easy, just select a topic from the dropdown window and blab away: 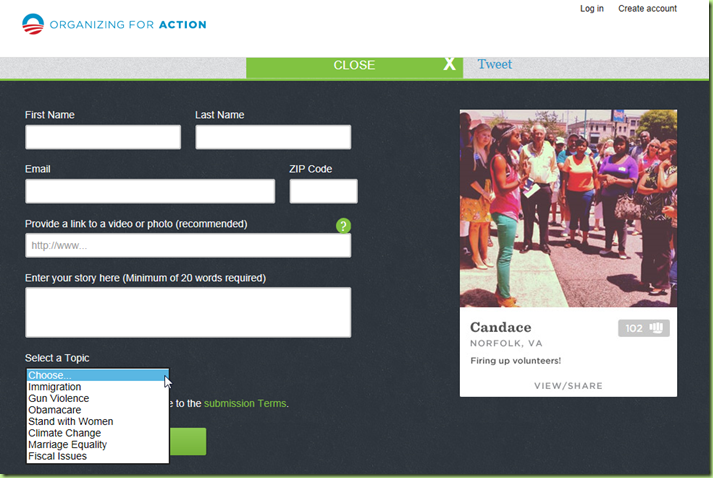 Because, remember: Organizing for Action is actually OFA@BarackObama.com. Which was not investigated by the IRS before receiving its 501(c)4 designation.

And as far as art and illusion are concerned, just note that in the 21st century nothing is as it appears to be. And it is best never to forget that.

Gullibility, thy name is America

Are they getting ready for a breakfast buffet for 30 people? Who the hell keeps 5 melons in the house?

Hillary Clinton’s first and second reactions were to try to shop a shoe into a bat.

It is quite impossible to over-estimate the level of stupidity of Team Obama when observing their activity, though often it is a challenge to know just where the stupidity ends and where the treason begins.

This administration possesses a very special type of stupid.

If I walked around the House barefoot, especially the Kitchen, my Mother would have had a fit.

What, were you born in a Barn?

9 posted on 04/14/2014 2:44:46 PM PDT by Kickass Conservative (Nobody owes you a living, so shut up and get back to work...)
[ Post Reply | Private Reply | To 3 | View Replies]
To: Kickass Conservative
If I walked around the House barefoot, especially the Kitchen, my Mother would have had a fit.

It says “FU America, we are in-your-face fake”. There are more books ‘shopped on the lower shelves but after a while all the circling gets pretty messy. The Gorbachev bust and the Russian babushka nesting doll are likely real, though.

As far as the kitchen fakery, there’s too much to list. On the back table... what cake platter is that high? What on earth is the “food” piled up next to it... pancakes? Who baked those, Uncle Buck?

I wouldn’t be surprised if the commie posters turn out to be ‘shopped in as well for the FU effect. Of course these beautiful people live and love Soviet propaganda... why not rub in the obvious just to agitate regular America.

Not strange at all.

Rules were rules when I was growing up.

My Mother thought walking around the house barefoot was gross. She had an issue with dirty feet on her clean floors.

I guess it was her upbringing.

Everybody is different. I remember my Best Friend’s Mother would leave the Butter Dish in the Cupboard rather than putting it in the Refrigerator. Yuck. Somehow he and his Sister made it to adulthood.

I grew up with 5 siblings. In the summer we had shoes for church and ran barefoot the rest of the time. We did have to scrape the tar from the street off our feet before coming in the house.

I take it mother wasn’t Hawaiian.

Yeah, my Mother would always say, let me see the bottom of your feet after we were outside playing. If she didn’t like what she saw, a soapy washcloth was supplied.

If you dirtied her floors, you were on the list. I think she and Mr. Clean had a thing going on.

Regarding the picture, I love the way the pat of Butter isn’t melted at all on top of the Pancakes. I also like the half pound of Bacon that’s on the Plate.

Carney should be keeling over behind the Podium one of these days.

It’s amazing what you can buy with an EBT Card in D.C.

I wonder if their cute Children are capable Liars like their Parent’s are?

The real story here, though, is the captions: