On Thursday, an out-of-sorts and whiny Ricky appeared at The Rev’s National Action Network to play the race card in the third person. 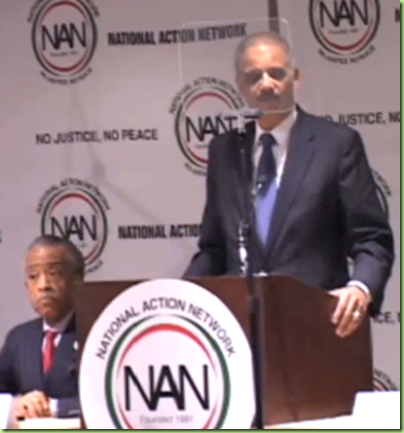 Attorney General for the most transparent administration in history

On Friday the lecturer-in-chief himself showed up:

In a fiery speech, Obama said that Republicans are threatening the right to vote. Meanwhile, Obama’s appearance represented a presidential seal of approval of Sharpton’s role as a civil rights activist, amid the new revelations about how Sharpton used a wire to record mobsters for the feds in the 1980s. 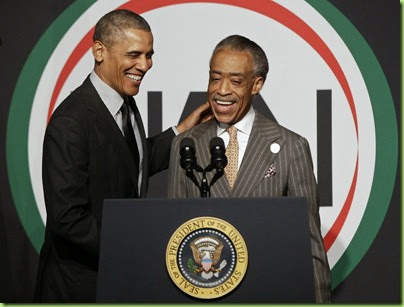 Channeling Joey “they want to put you back in chains” Biden’s civil rights bravado, BO fanned the flames of racial animosity by complaining about the Republicans’

“well organized and well funded efforts to undo these gains,”  “The stark simple truth is this: The right to vote is threatened today,”

While throwing a little class envy into the equation for good measure:

“Just because you don’t have the money to travel abroad doesn’t mean you shouldn’t be able to vote here at home.”

That’s right! If you can’t afford to go home to vote, vote here instead.

And then, having worked so hard for the American People all week, 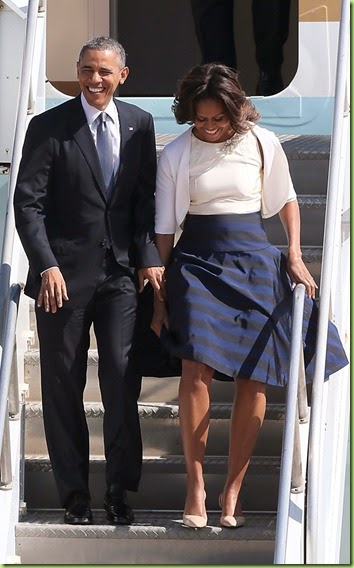 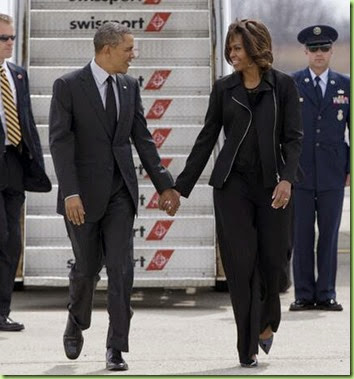 BO, MO, Val and her current beau, Ahmad Rashad, joined several other friends for dinner at Maialino, a Roman trattoria at the high-end Gramercy Park Hotel and a Broadway play:

Capping two days devoted to praising the advances of the civil rights movement, President Barack Obama and first lady Michelle Obama attended the Broadway revival of "A Raisin in the Sun," a play about an African-American family in 1950s Chicago. 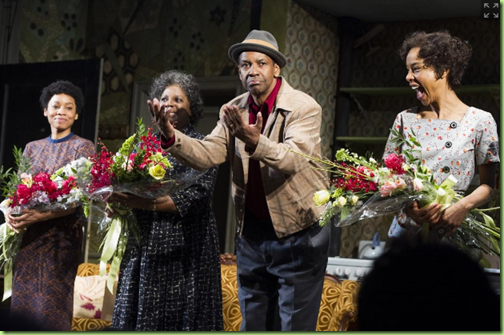 The play, which stars Denzel Washington, capped a rare evening out in New York for the first couple. They were in the city for activist Al Sharpton's National Action Network conference, which the president addressed earlier Friday.

Whoa! - two “cappings” in as many paragraphs? I thought guns were illegal in New York?

Unfortunately the play was interrupted by a piercing fire alarm that rang for 10 minutes while the audience sat in the dark. Odd, normally the Secret Service would have wooshed the President out of the theatre at the first sign of a problem. I’m not accusing anyone of anything, I’m just saying…it seems odd. To me.

And you know what else seems odd? Big Guy hanging out with the Rev Al; I mean, after it was disclosed that he was an FBI informant against the Mob in the 1980’s. It’s generally not considered a good idea for the President to consort with someone who has ties, no matter how tenuous, to the Mob. Especially if their ties might put them on the, uh, “whack” list – if you see where I’m going here.

And now that a former Reverend Al employee has come forward to discuss just how willing the Rev was to get into the cocaine business, it seems to further undermine Al’s already implausible deniability that he had any connection to the seedy side of the Mob. Next week expect the Rev to explain that his interest in the coke was strictly for medical purposes, and only for personal use.

If AG Ricky is still looking for answers to why he and Big Guy get dissed, maybe he should expand his horizon of possibilities beyond the race issue. 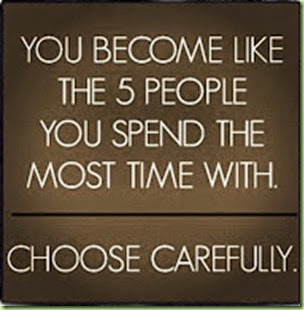 “By their appointments shall ye know them.”

Do Michelle’s two butt cheeks count towards the five?