Did you know that yesterday was “No Makeup Monday?” It appears to have something to do with “loving your selfie” although going in front of a camera lens without a stitch of makeup on and expecting to love the result seems rather counter intuitive to me. I, for one, think I look much better with a bit of lipstick.

And maybe even a touch of blusher:

Butt back to “NMM,” the entire staff of the Today Show bravely went where no hi-def TV team has ever gone before: Makeup free! To say it wasn’t pretty is a bit of an understatement. And as is the case with aging, the guys seem to have navigated the dangerous shoals better:

Although most of them look like they could be posing for mug shots, Matt Laur, Al Royker and Carson Daly don’t look all that different without professionally applied makeup.

The ladies however…well let’s just say they were very courageous:

Kathie Lee Gifford, Hoda Kotb and Samantha Guthrie look like, well…like somebody else. As I understand it, the whole point of the #LoveYourSelfie campaign is “to spread positive body image through social media snaps.” After reviewing the above photos, I’m still not getting how that actually works.

It looks like No Makeup Monday was a a really big deal though. Even RuPaul participated, appearing sans makeup at precisely 4:30 PM EST to ring the closing bell for Nasdaq and to hype yesterday’s premier episode of his hugely successful show: RuPaul’s Drag Race, Season 6. 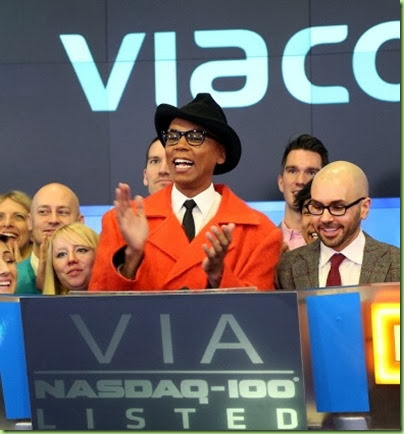 Gosh, this never gets old, does it? The RuPaul “Who Wore it Better” meme I mean: 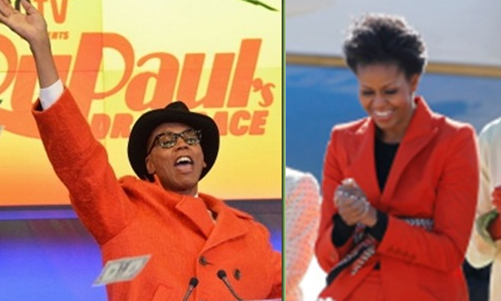 It wasn’t a fair mash-up though, because Lady M never goes anywhere without makeup.

Further fueling the friendly rivalry between RuPaul and Lady M, they both released video promos yesterday for their respective programs.

First, here is Lady M teamed up with Will Ferrell to do a “hilarious ‘Let’s Move’ public service announcement:”

You may have to watch it twice to catch the “hilarious” part, butt the kids are adorable.

Meanwhile, RuPaul’s promo for Drag Race 6 depends on the special *cough* talents of his Drag Race contestants who most certainly were not participating in Makeup Free Monday:

While neither of the promos were done “makeup free,” there is a whole lot of “selfie love” going on. I wish I could vote for both of them. Oh wait, I can!

I would kick them out of bed for crumbs.