When Lyndon Baines Johnson announced his War on Poverty in 1964, I wonder if he expected we’d still be waging it 50 years later?

We’ve now spent over $20 trillion on the War on Poverty, and what have we got to show for it? A welfare system that has been institutionalized into one of the country’s main industries, the creation of a new, permanent, underclass of non-contributing members of society, and the destruction of the black family: in short, a system that does more to perpetuate the existence of poverty than eliminate it. You could call it collateral damage. 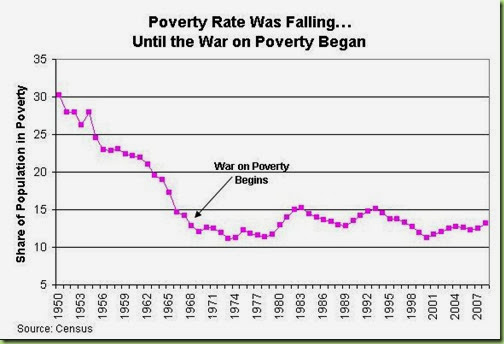 While many have suggested that the best way to end this War is to declare victory and get out, like Big Guy did in Iraq (never mind Fallujah...nothing to see there), others like Shirley Jackson Lee, have an alternate solution: let’s call it something other than what it is. Instead of calling transfer payments “welfare” let’s call them something else – like “transitional living funds.” She said these transitional living funds should be considered “huge safety nets — not handouts.”  Because making people feel better is more important than actually solving the problems creating the need for welfare, excuse me, “transitional living expenses.” Because when you can make people feel better  they’ll vote for you forever. The real question left unanswered – indeed - not even asked, is what would that poverty line graph look like if we had spent that $20 trillion on things to grow the economy rather than on things that just grow a perpetual dependent underclass? 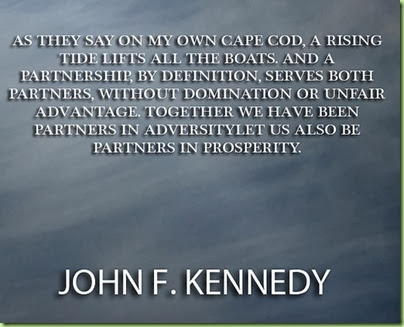 Alas, once you get off the right path, it becomes increasingly harder to find your way back to the harbor, and the rising tide.

I’m thinking we could use a little more wisdom around here, and a lot more integrity. Because I’m not sure we are on the right path, or even looking for it very hard. 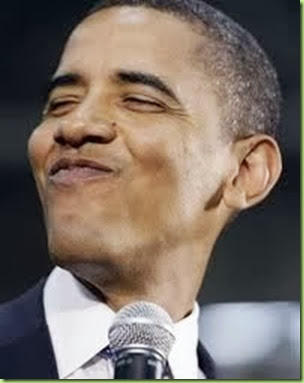 It’s neither wise nor honest to lecture the GOP about not caring about the plight of the unemployed from your Hawaiian golfing bunker.

It had nothing to do with “helping,” anyone. It had and has everything to do with entrapping whole segments of society economically and making them dependent and beholden to government so they would vote for those who were “helping” them.

America at the Crossroads of History
http://www.jeffhead.com/crossroads.htm

He said, "LBJ will go down in history as one of the most underestimated forces of destruction ever."

You could hear the Lib woman actually gasp. It was hilarious.

Besides the VN war, this is LBJ's contribution to American life.

Jeff, the “great society” was the death knell of
the moon program too. Another democrat victory
like that and we will be undone.

8 posted on 01/09/2014 9:51:15 AM PST by tet68 ( " We would not die in that man's company, that fears his fellowship to die with us...." Henry V.)
[ Post Reply | Private Reply | To 2 | View Replies]
To: NOBO2012
LBJ's 'War on Poverty' was a success as it herded millions of Americans, primarily blacks, into lifelong dependence on government and in the process, ensured the Democrat party generations of voters eager to keep the money flowing by voting Democrat. That LBJ knew exactly what he was doing is obvious and that The Great Society' devastated the black community, first by making single women who were promiscuous even more so by offering them 'benefits' for having children out of wedlock then making black men irresponsible by ensuring that their presence in the home would diminish the income to the mother of their children. Today, we are confronted with a once-unimaginable illegitimacy rate of 70% in the black community. Those same communities are in chaos, infested with crime and awash in drugs. The 'projects' that were intended to offer poor people a decent place to live are usually destroyed by their tenants and torn down.

Just as LBJ predicted, for all the failures of Democrat welfare schemes and the damage they've inflicted on the poor, black Americans still vote for Democrats by huge margins because so many are trapped in the web of government dependence and have not been taught the way out. There are exceptions of course but the majority of American blacks are mired in near-poverty and kept there by 'War On Poverty' policies that are intended to sustain them but never boost them into the productive middle class. LBJ would be proud.

We fought poverty and poverty won.

Thanks for the ping

Our government is run by fools... or government workers who don’t care what damage they do as long as they get money, prestige and influence.

They work to create hell on earth.