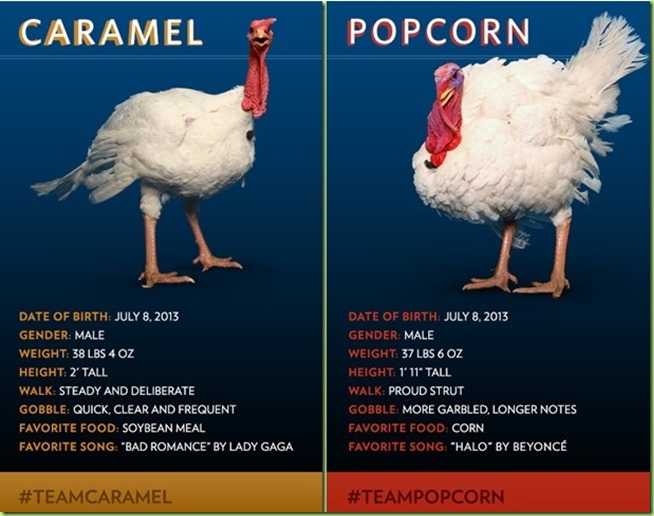 Whether you like your bird long and lean, like Big Guy, or short and fat, like Chris Christie, Healthcare for the Holidays has a turkey for you!

Just in time for the holidays: Organizing For Action (OFA) has sent their fellow Obots a handy tip sheet to help them discuss Obamacare with friends and family who are not Obots.

President Barack Obama’s deputies at Organizing for Action are urging supporters to give an Obamacare pitch to their relatives during the most iconic of American family and religious events.

“Take advantage of downtime after meals or between holiday activities to start your talk,” says OFA’s marketing script, titled “Health Care for the Holidays.”

This is simply ridiculous. Have you ever known an Obama acolyte who needs instructions on how to annoy and harass non-believers like “the uncle who feels the need to spout off about Obamacare?” Me neither.

I guess this is really a worrisome time of year because even the Washington Post issued “A guide to surviving Obamacare debates at Thanksgiving.” Their missive contains specific examples of hypothetical issues which may arise, like:

“Your grandfather has some concerns about getting death paneled.”

Along with helpful tips and answers to their own hypothetical situation:

You can reassure any elderly relatives that there is absolutely, definitely, without a doubt no death panel in the Affordable Care Act. There is an Independent Payment Advisory Board (IPAP), which would be allowed to recommend payment cuts for doctors who serve Medicare patients. This board is not allowed to deny patients' care; they only get to tinker with reimbursement rates. [ed. Until such time as HHS determines that “payment cuts” include the withholding of certain treatments. Or until they write a new regulation (to control run-away “payments”) that gives them the right to “tinker” with what will turn out to be your “end-of-life treatment.”].

And besides, the IPAB isn't going into effect this year so kindly point that out to your 85 year old grandmother, who will probably be dead of natural causes before the Death Panels come into their full power. Or she could just take the pain pill. 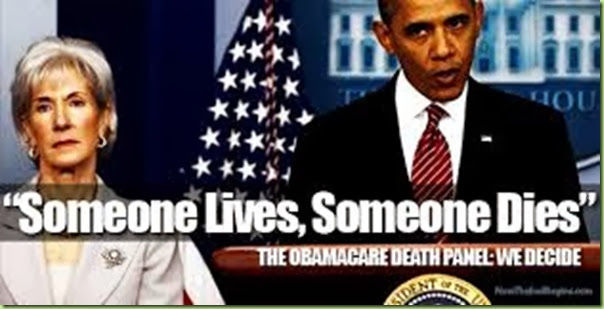 What do you have against Planned Grandparenthood anyway?

Butt enough about unpleasant holiday traditions; did you see Big Guy in Hollywood yesterday? He sure did get a lot of the glitterati roiled up, complaining about being inconvenienced – a word not usually found in their daily lexicon. Even the original good-times-Charlie Sheen was rankled by “the inane chaos” caused by Big Guy’s visiting entourage. Heck, Barry should have known better than to come for a visit during the Hollywood happy hour (9-5).

First BO visited his Presidential campaign launch pad and previous world headquarters, DreamWorks studio, to give a speech on dreams and schemes. First, addressing economics he called Hollywood “a bright spot in the economy:” 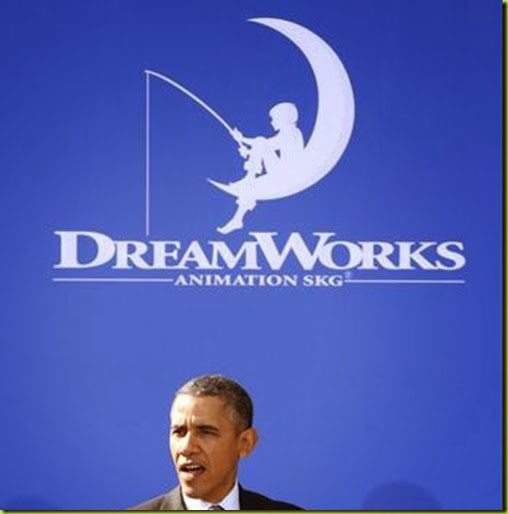 They don’t call it “Tinsel Town” for nothing.

next, he spoke about comprehensive immigration reform:

“As I was getting a tour of DreamWorks, I didn’t ask, but just looking at faces I could tell there were some folks who are here not because they are born here, but because they want to be here.” 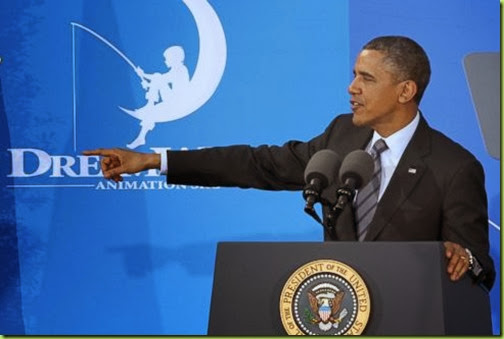 Look, there’s one right there! (note: it’s not racial profiling if done by a half-black President)

And last, butt not least, Obamacare - once again known as the “Affordable Care Act” for some reason; I take it it’s a branding issue.

Getting into the spirit of the original Thanksgiving, Big Guy used the opportunity to “touch some Indians” (h/t Dennis Miller) at the studio. First he shook hands with Jim Parsons, star of The Big Bang Theory, and then Steve Martin who apparently doesn’t shake hands. He probably has some type of germ fetish – I think that’s common in Hollywood - and was afraid of catching small pox or something. 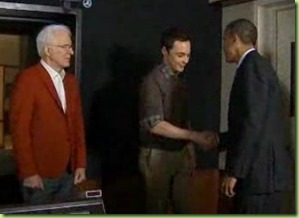 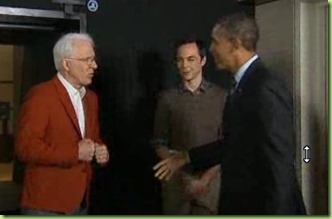 So instead of extending his hand he offered Barry a wing, claiming he “had a cold” and didn’t want to contaminate Big Guy. Right. Someone should refer Mr. Martin to a shrink who can liberate him from his fears of catching HIV through casual contact. Or whatever his obsession is all about. 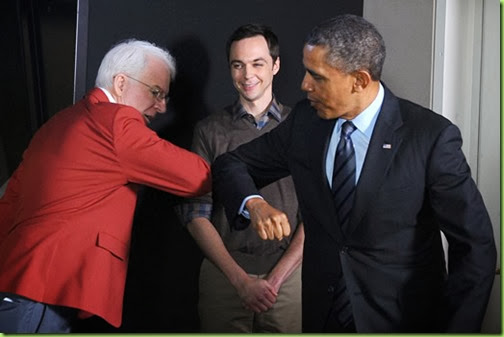 Well I’ve got to run now; I have to bake some pies for tomorrow.  I’ll have to describe Lady M’s lovely new Thanksgiving frock and ‘shoppe in more detail at a later date. In the meantime I’ll just leave you with this lovely portrait of Lady M’s wings incredibly toned arms to reflect on. 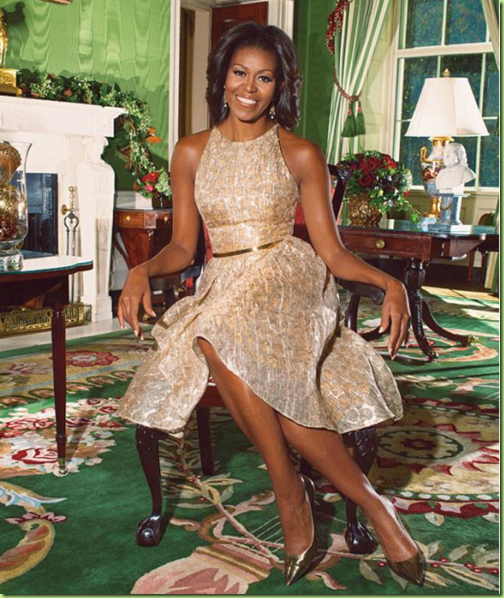 Both these creatures need to be kept out the rain to prevent drowning while staring at the sky.

This has to be airbrushed and photoshopped. The first Wookie looks almost elegant in this pose. Even her face looks heavily shopped. Is that even her?

arms and hips are 100% photoshopped, look at the background between the elbow and hips. the sides don’t match.

Support FR, Donate Monthly If You Can
5 posted on 11/27/2013 8:20:46 AM PST by DJ MacWoW (The Fed Gov is not one ring to rule them all)
[ Post Reply | Private Reply | To 1 | View Replies]
To: NOBO2012
Just in time for the holidays: Organizing For Action (OFA) has sent their fellow Obots a handy tip sheet to help them discuss Obamacare with friends and family who are not Obots. "President Barack Obama’s deputies at Organizing for Action are urging supporters to give an Obamacare pitch to their relatives during the most iconic of American family and religious events. “Take advantage of downtime after meals or between holiday activities to start your talk,” says OFA’s marketing script, titled “Health Care for the Holidays.”"

Anybody that tries that should be sent to the kitchen or worse. On the other hand, maybe the irritation will cause more people than ever to oppose their leftist screed.

"As I toured DreamWorks, I could tell there were some folks
who weren't born here, but they came to Hollywood b/c they
are weenies like me.... they got bigtime penis envy of you
Hollywood swordsman."

" And I want to thank Jeffrey Katzenberg for making sure all my
photo-ops were with men. Michelle said any cavorting with
nubile starlets, was gonna necessitate Obamacare for my a**."

WASHINTON TIMES REPORTED: 2012 Candidate Obama trucked through Tinseltown to buck up his supporters.

His first stop was an unusual two hour closed-door, off-the-record meeting at DreamWorks CEO Jeffrey Katzenberg’s house for a dozen donors who had maxed out their contributions.

Bill Clinton was there hoping to score a lewinsky w/ 2-3 starlets.

Then Obama pitched to 150 Hollyweirdos, who paid $25,000 for a slice of smoked salmon pizza at the fabled Wolfgang Puck restaurant....superstar George Clooney, film studio honcho Harvey Weinstein and Oscar host, Seth MacFarlane, were all there.

At the time, the worshipful Hollywood honchos planned an Obama star on Hollywood’s Walk of Fame to cement his place in La-La Land....until they found out they couldn't keep their health plans, as Obama promised.

Turkeys are so dumb the growers often put shiny glass marbles in the feed trays to teach the poults to peck at the feed.

They have to close up the tops of waterers with tape to keep the poults from falling in and drowning.

Pardoning a turkey is the most silly thing I’ve ever heard of. These turkeys will be dead in a couple of years anyway, so why not EAT THEM NOW!

I’ve heard they are sent to a petting zoo. Now, who in their right mind wants to pet an ugly stinking bird.

She’s a nice looking woman from the neck to the waist. It the areas outside that zone that give her trouble.

My response: STFU, the game is on. And oh, by the way, FUBO!