Yesterday we officially launched the “We Be Hating on Big Greedy Insurance Companies” initiative to redirect the wrath of the millions of you people who are finding out that you can’t keep your insurance. Even though Barry promised. Now that so many people are discovering they really can’t keep their coverage, we had to launch a full scale O-BS (operation blame shifting).

We even deployed the Valkyrie to fire the first shot:

"No change is required unless insurance companies change existing plans"…due to changes mandated by Obamacare. Don’t you love a good circular argument?

Butt it gets worse: 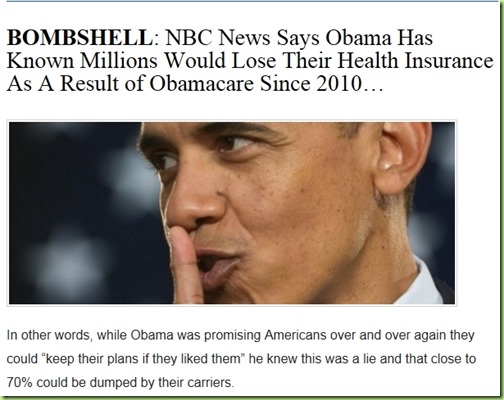 Butt hey! It’s the law of the land now: so what difference, at this point, does it make? (h/t Hillz)

So I think a lot of people are going to be surprised when they find out how much they’re going to save by enrolling in the Obamacare Affordable Healthcare Plan.

Take Cody and Skylar, our young idealistic Obots, for example. We join them once again in their Seattle condo following the great Teahadist Government Shutdown, where they’ve just received a notice from their healthcare insurance company. (h/t Dewey from Detroit)

And in other Obamacare News: You probably noticed the cute Obamacare lady has disappeared from the Healthcare.gov website: Despite rumors to the contrary, she’s not the designated “the buck stops here” driver. We just had to cut her back to part time, as we can’t afford to put any more people on our expensive federal government insurance plan.

Hopefully after fixing the websites, Obama will get around to lowering those sea levels and healing the planet like he promised.

Ha ha! The insurance industry backed this bill and now they’ll be blamed for following the rules and destroying the game.

Not the first time this administration has screwed over its allies.

5 posted on 10/29/2013 7:22:52 AM PDT by Junk Silver
[ Post Reply | Private Reply | To 4 | View Replies]
To: NOBO2012
Sure the Obama administration will blame the health insurance companies for changing policies, but the insurance companies were forced to make these changes to comply with the new one size fits all minimum plans mandated by Obamacare. Gee Valerie Jarrett wouldn't it seem strange that insurance companies large and small all over the country would be making policy changes all at once effective January 1, 2014 unless they were being compelled to do so? Obama as always is blaming someone else.
6 posted on 10/29/2013 7:33:30 AM PDT by The Great RJ
[ Post Reply | Private Reply | To 1 | View Replies]