I’m launching an new education forum to discuss/analyze the proper use of Alinsky’s Rules for Radicals.

Today we’re tackling Rule Four: “Make the enemy live up to their book of rules.” Specifically, we’ll be exploring one of Rule Four’s corollaries: “Turn your opponent’s words against them.” 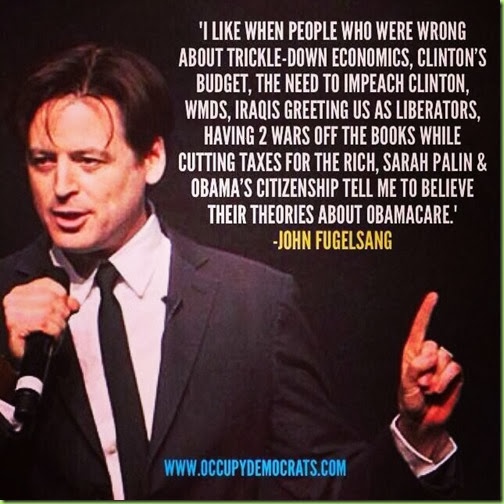 Me too! You’re talking about Progs, right?

Remember it’s always best to provide illustrations of your corollary if you can:

as well as annotated text, where possible:

I like it when people who were wrong about trickle up economics (e.g. unemployment is our the best economic stimulator), Obama’s unprecedented 4-year running trillion dollar budget deficits, the need to impeach Bush, giving guns to Mexican drug cartels, the Taliban and the Brotherhood, Egyptians electing a “moderate” Muslim Brotherhood president, having unemployment counted off the books (i.e., taken out of the labor force) while increasing taxes on the rich (and anyone else who still pays taxes), Sarah Palin (and Obama too, for that matter), & Obama’s citizenship (he’s really more a citizen of the world) tell me to believe their theories about Obamacare.

For the record, actor, comedian John Fugelsang - best known for hosting America’s Funniest Home Videos and as a VJ on Vh1 – now lists “political activist” in his credentials as well. Although, in the time of Obama, that’s redundant.

We can’t afford  your therapy either, John. Go buy some Obamacare.

Please discuss amongst yourselves, as MOTUS has to be away all day.

Oh, well put. I was prepared to scoff at him, but he is spot ON!

I have started calling Libs racists - “Well, I don’t think people are to stupid to take care of themselves, even minorities. It just seems to be a bit racist, to me, to think they are incapable.”