Yesterday we briefly interrupted our battle with the Tea Party Anarchists to  present the Medal of Honor to retired Army Captain William Swenson. The long overdue medal was awarded to former Captain Swenson for repeatedly risking his life in Afghanistan's Battle of Ganjgal to rescue his fallen comrades. 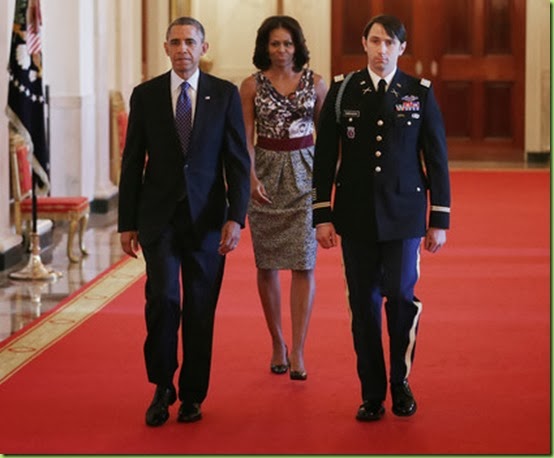 It only appears that Lady M is floating in space

For the occasion, Lady M selected one of her recycled frocks, this one a little Rachael Roy number from way back in 2009; as you can see it still fits as well as it did 4 years ago! 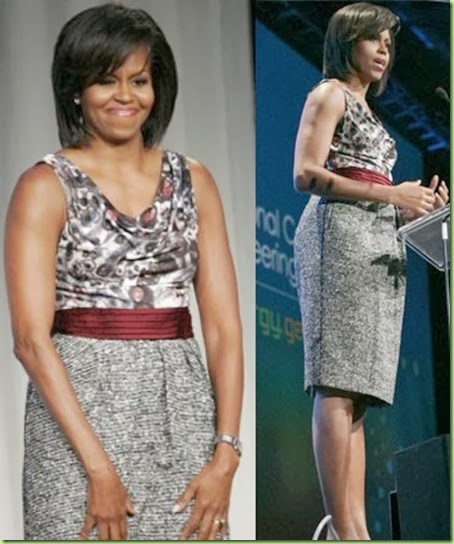 Even though we’ve, uh, matured a bit since then we still have our youthful style and panache when it comes to selecting an appropriate cocktail frock for these solemn ceremonies. I know you all remember our first Medal of Honor ceremony choice, also from 2009. It was a huge hit around the intertoobs and remains a reflection of Lady M’s classic style to this day: 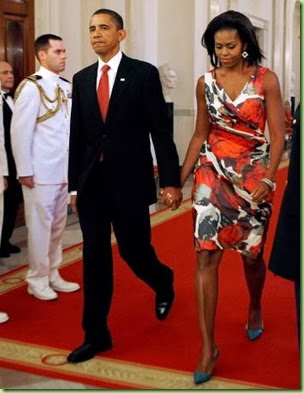 It was worn at the ceremony awarding the Medal of Honor posthumously to Sgt. First Class Jared Monti for his heroism in Afghanistan. And although Lady M and BO both met with and comforted Monti’s parents after the ceremony, 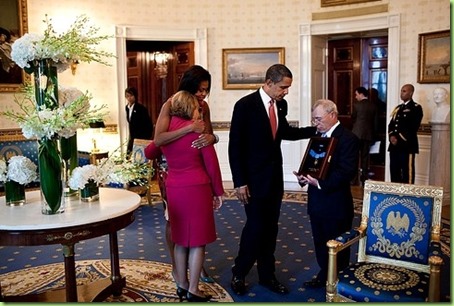 somehow Big Guy forgot about that little detail - that Jared had been killed by an enemy rocket propelled grenade while attempting to save a fellow soldier’s life. And due to his memory slip he said this, a year later, in a speech to Monti’s comrades from the 10th Mountain Division at Fort Drum:

“I had the great honor of seeing some of you because a comrade of yours, Jared Monti, was the first person who I was able to award the Medal of Honor to who actually came back and wasn’t receiving it posthumously,”

Oops. As you might imagine, being Commander in Chief you have so many things on your mind its easy to forget some of the less important details. And really - what difference, at this point, does it make? (h/t Hillary Clinton)

Besides we did place responsibility where it belonged and held people accountable for the failure; the speech writer was fired and TOTUS was placed on disciplinary leave for 2 weeks.

Anyway, I know that everyone is on pins and needles awaiting the announcement that the Republicans have wrestled control back from the Tea Party Anarchists and have reached a deal with the Democrats to release the hostages. So in order to ease the tension, let’s spend a little time enjoying a few highlights from previous Medal of Honor ceremonies. 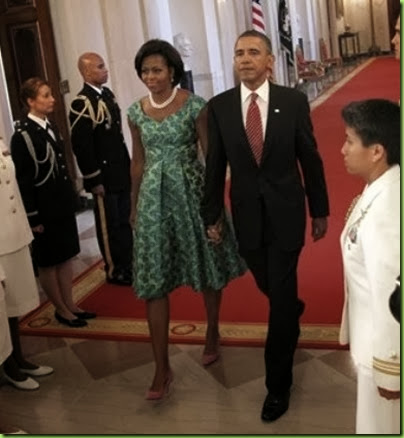 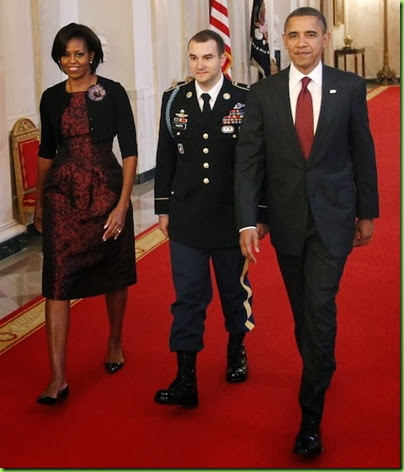 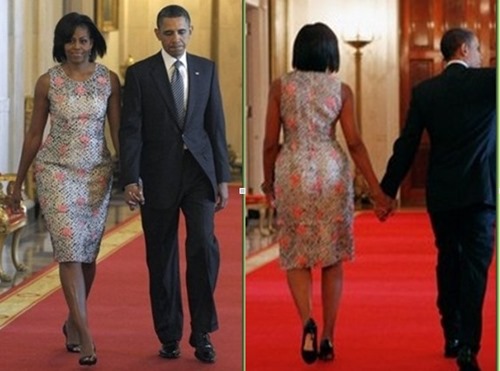 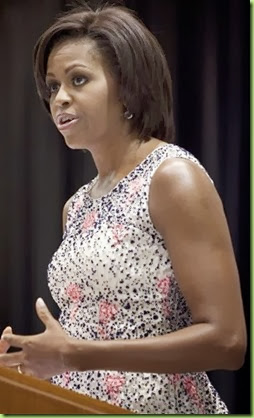 Close-up of the Good and Plenty frock 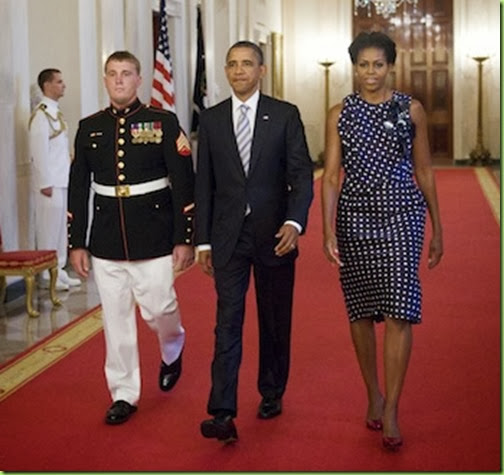 Medal of Honor ceremony for Dakota Meyer; also for valor in the Battle of Ganjgal in the Kunal Province of Afghanistan. Mo chose subdued Lanvin dots and a matching pin with ribbons of her own. 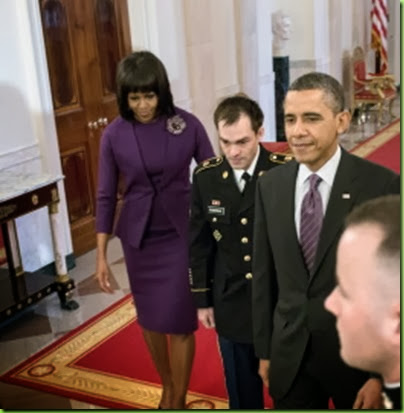 Royal purple and a squirty pin for Staff Sergeant Clinton Romesha’s ceremony awarded for bravery in the Battle of Kamdesh in Afghanistan. Below, Mo tries to emulate Sgt. Romesha’s humility (note to self, needs more work butt good enough for a job with the MSM). 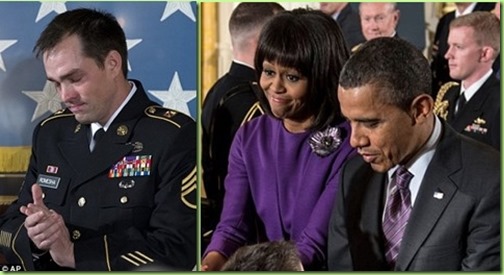 Getting back to yesterday’s ceremony, I can tell you that BO suggested that everyone in Washington could learn a little something from Army captain William Swenson, implying that the do-nothing Congress should get moving on raising the debt ceiling so he can get back to the work for the American people (h/t Bill Clinton):

"At moments like this, Americans like Will remind us what our country can be at its best — a nation of citizens who look out for one another, who meet our obligations to one another not just when its easy but also when it is hard," Obama said. "Will, you are an example to everyone in this city and to our whole country of the professionalism and patriotism we should strive for if we wear a uniform or not."

Gee, that was inspirational. Maybe Big Guy will take his own advice. Because frankly, it’s hard to believe that anyone who has handed out so many Medals of Honor to our brave troops would ever barrycade the open war memorials. 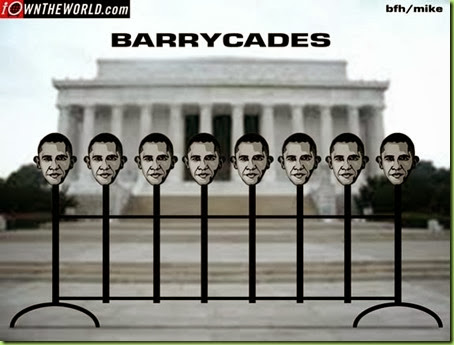 Well that’s all I’ve got for now. I’ll get back with you as soon as we can announce the deal that will avoid a constitutional crisis created by Barry’s refusal to pay the interest on America’s debt (rather than defer any domestic transfer payments that might prove unpopular with the morons who elected him…twice his constituents).

I had to stop reading about pic #5 since I was becoming quite ill, and now have to find some ibuprofun. Next time, just links, please.