Big Guy had a busy week. First, declaring that he had no intention of negotiating with GOP terrorists like Ted Cruz, who were threatening to burn the house down, and secondly, declaring his intent to negotiate with Hassan Rouhani, the new, moderate, political, philosophical and spiritual leader of the Republic of Nuclear Iran.

Butt Lady M was equally busy entertaining the spouses/domestic partners of world leaders who were gathered in New York for the annual United Nations pow-wow. 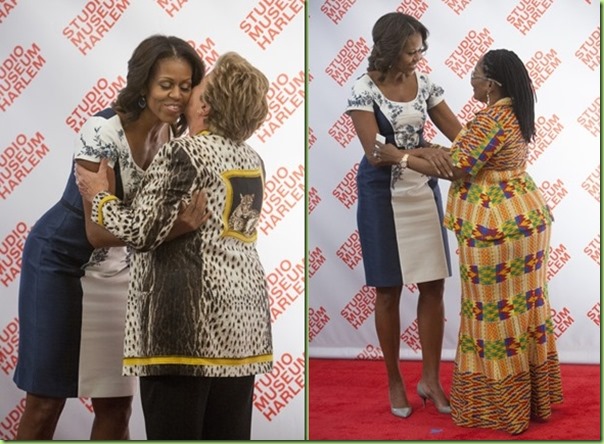 Lady M enjoyed showcasing the “talents” of the other spouses for a change, instead of her own

Instead of the usual, bland program offered to spouses and domestic partners accompanying the world leaders to UN week, MO wanted the group to experience a unique taste of Americana so she took them to lunch at The Studio Museum in Harlem. They toured the museum’s art gallery which was showcasing an exhibit of African-American art (is there really any other kind?) including paintings by Robert Pruitt that “highlight the strength and dignity of women,” as Lady M described them. Hmmm, interesting take; to the untrained eye they appear to be a bit…misogynist.

And if Robert wasn’t an African-America, they might be considered racist, too.

The luncheon featured African-American soul food (is there any other kind?). It was prepared by celebrity chef (and big time Obama supporter) Marcus Sammuelson. Marcus, as you may know, was born in Ethiopia, adopted by Swedish parents and raised in Göteborg, Sweden. He was professionally trained as a chef in Switzerland and Austria, so who would know better how to prepare African-American soul food? Seriously!? Just because he’s black!? Isn’t that a bit…racist? 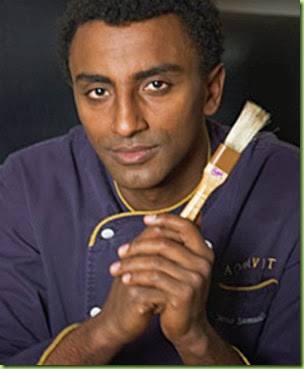 Almost to the point of looking gay.

Butt he’s married to a gorgeous (and very tall) model: 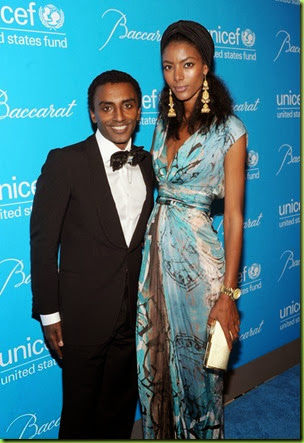 My! What long legs…

And besides, in this day and age, what gay guy would marry an Amazon just to hide his sexual preferences? 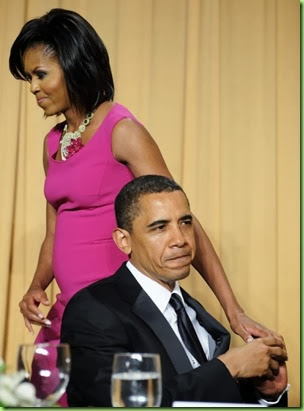 Anyway, I noted that some of you were interested in the menu that Lady M served to the UN spouses/partners in Harlem. It isn’t the kind of food we usually serve – or eat, for that matter - butt we were more interested in making a political statement than impressing our guests with our cooking skills:

“(Lady M’s) remarks focused on the importance of the arts in Harlem in expressing the complexity and struggle of African-Americans.”

The African-American soul food menu - “hailed by Mrs. Obama as "culturally exciting."  included arugula salad (I know this sounds snobby, butt remember, arugula is essentially a weed and as such was relegated to slaves for their own meals), shrimp and dirty rice, collard greens, cornbread and banana pudding parfait with huckleberry sauce. Mmm, mmm, mmm! Wait a minute – “huckleberry?” – isn’t that a bit…racist? 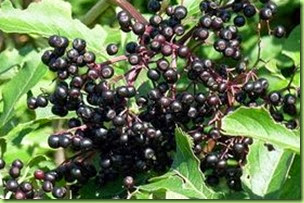 "There's a reason why I wanted to bring you all to Harlem today," Mrs. Obama said.  "And that is because this community...is infused with a kind of energy and passion that is quintessentially American, but that has also touched so many people around the world."
Explaining Harlem's role as the heart of black culture in the early twentieth century, Mrs. Obama noted it was home to "some of the greatest African-American artists that our country has ever known.

While enjoying their lunch, the guests dined to the strains of a string quartet playing Mahler and Brahms. As dessert arrived they enjoyed the award winning singing of Broadway star Audra MacDonald, who seemed far more impressed with Lady M than the location she selected for the venue:

Boy, I feel your pain Audra. Butt remember, “this community...is infused with a kind of energy and passion that is quintessentially American.”  So, I guess, get used to it.

Each of Lady M’s guests were sent home with a hostess gift basket that contained: 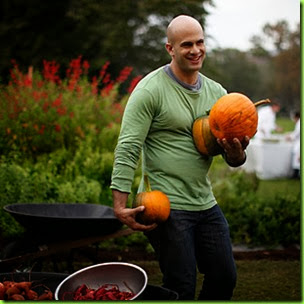 I’m sorry to report that as of this writing Sammy is officially off the market: he’s engaged to Ms.NBC “journOlist” Alex Warner (Alex is a girl, in case you were wondering). It’s hard to say who’s more disappointed about this announcement, Lady M 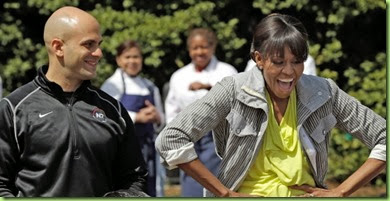 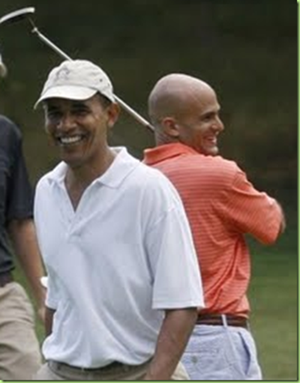 No word yet on the height of Alex Warner, butt for all I know she could be a really tall girl too.

In reference to the dude squating on the sidewalk........ Just producing some new art work for the gallery the event was being held in. Maybe he could have incorporated some of the ACA to clean up with.

On another note, if, and it looks like this is a big if, you had a senator that voted against the “buy it before you see it” act (also known as the UN-affordable care act), drop them a thank you note. They may have voted NO but you can bet they’re going to be slammed by the proponents of FREE STUFF for everybody.

Very nice NOBO! I like to get my weekend off with some good laughs.

” First, declaring that he had no intention of negotiating with GOP terrorists like Ted Cruz,”

However, he would like to have a beer with the Kenyan terrorists.

and to have a chat with homosexual-hanging Iranians