Wow! Imagine the nerve of that guy - spouting off on healthcare like that when he doesn’t have the faintest idea what he’s talking about.

No, not this guy: 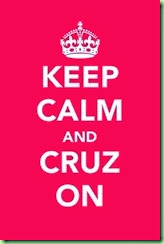 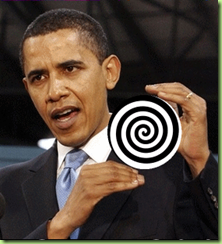 I trust you’ve read this report that claims that Big Guy and his Big Brains came up with the whole idea of Obamacare as a “throw away applause line” in a campaign speech:

Soon-to-be-candidate Obama, then an Illinois senator, was thinking about turning down an invitation to speak at a big health care conference sponsored by the progressive group Families USA [in January 2007], when two aides, Robert Gibbs and Jon Favreau, hit on an idea that would make him appear more prepared and committed than he actually was at the moment.

Why not just announce his intention to pass universal health care by the end of his first term?…

“We needed something to say,” recalled one of the advisers involved in the discussion. “I can’t tell you how little thought was given to that thought other than it sounded good. So they just kind of hatched it on their own. It just happened. It wasn’t like a deep strategic conversation.”

I know that sounds entirely plausible, given the relative inexperience of our campaign staff, 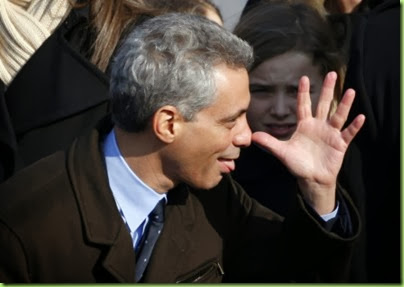 and Big Guy’s own penchant for fly-by-the-seat-of-our-pants strategic planning; butt seriously – universal health care has been the Holy Grail of communists socialists progressives since their inception.

And  I know for a fact that BHO didn’t build that strategy on his own; somebody else did that for him: 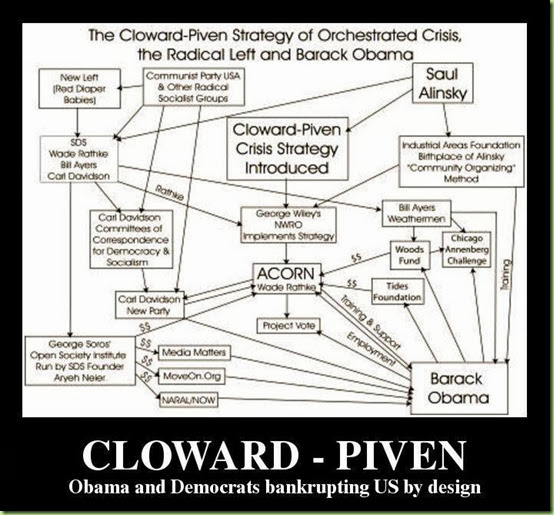 Anyway, the Hot Air story makes it sound like BO’s campaign was rather slovenly pulled together and implies that Big Guy would say anything to get elected. How racist is that? 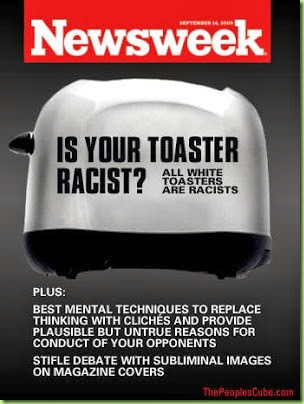 So maybe the Really Big Brains hadn’t thought the whole Obamacare implementation thing through, butt that’s not their job. That responsibility falls on the shoulders of the little people: highly trained and skilled government functionaries. 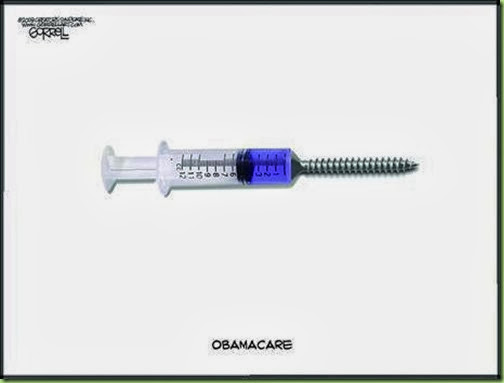 Butt seriously, how tough could it be? All we had to do was figure out how to give 20-40 million uninsured (documented and undocumented) citizens free health care insurance (which is their right) without raising the government’s cost or driving doctors out of their practice. It’s just a matter of spreading the wealth around, right? And we sure know how to do that. It’s so simple that any clown can do it: 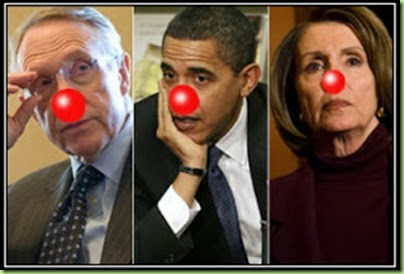 Take Nancy Pelosi for example; she did it without even reading the bill!

So don’t try to scam me into believing that Big Guy’s eponymous bill - designed to win the hearts, minds and votes of millions of poor, unemployed, and disenfranchised citizens for decades to come - was a “throw away line.” 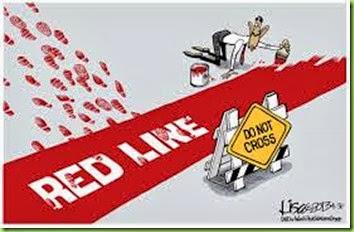 Let me be clear; Obamacare was a well conceived idea, 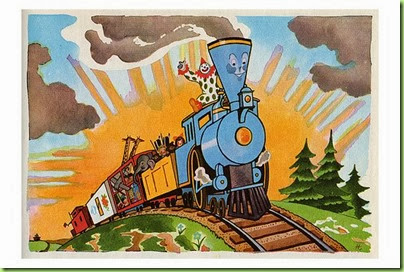 that ran into a few little problems, mostly caused by Republicans, 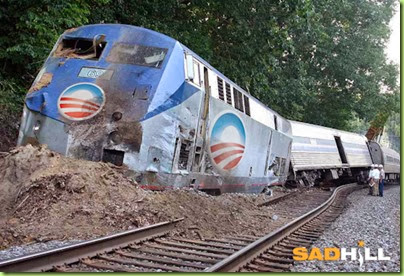 and temporarily ran off the rails. Butt don’t worry: we’ve got plenty of Big Brains left around here to get it back on track. Of course we’ll need a little more money to complete the track before things are 100% operational. 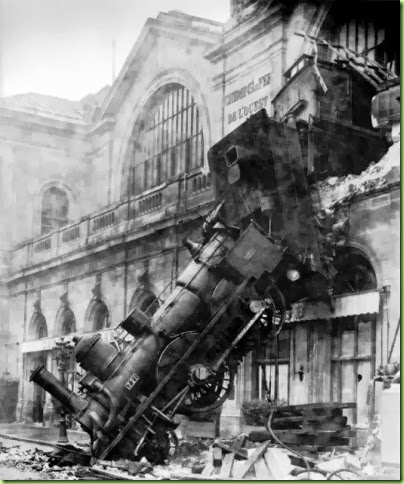 And since our economy is now in the fifth year of a robust Obama recovery, there’s no problem with increasing taxes on everyone the filthy rich in order to fund the rest of the track.

So listen up Senator Cruz; we have no intention of putting this train where you think it belongs: 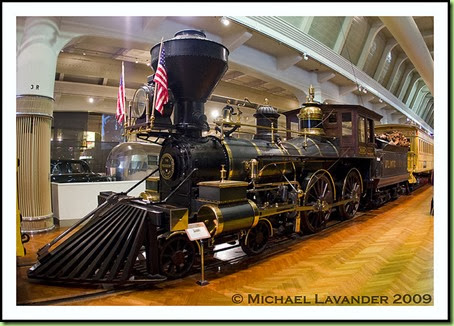 So save your breath. We don’t need to have you shooting your mouth off like some huckster on the Atlantic City boardwalk about all the lies in Obamacare. That’s Barry’s job. 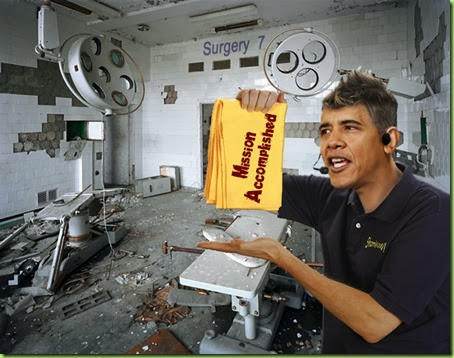 Barrack Hussein Obama: Sham-wowing us since 2008

“In the 2008 campaign, affordable, universal health care for every single American must not be a question of whether, it must be a question of how,” Obama said at the Families USA conference. “We have the ideas, we have the resources, and we must find the will to pass a plan by the end of the next president’s first term.” 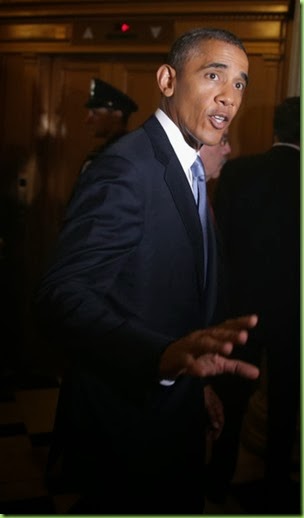 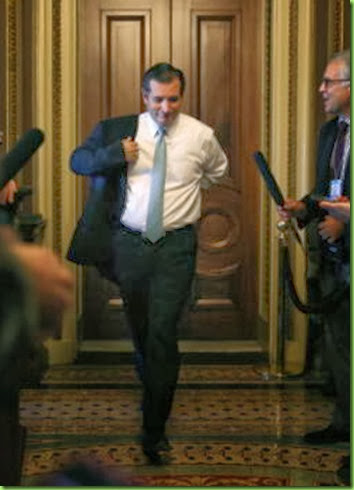 I watched Ted Cruz during his valiant effort to halt the disaster called Obamacare. I hope you watched it as well. If he has used it once, he used the phrase “...we no longer listen to the people, our constituents...” over a hundred times. And he was right...they don’t. And the fact is, THEY NO LONGER NEED TO.

I’ve sent my little rant on this topic before but Ted’s honest comment compels me to do so again.

Among others, Thomas Jefferson warned that the financial disaster we now face would be but one of many problems paper money would visit upon us if we allowed our “leaders” to remove the backing from the currency, to wit:

“When the servants if the people are paid with something other than that which the people themselves have produced (i.e. the real, tangible products of their labors or some fixed and real medium of that exchange), the roles of master and servant will be reversed.”

It was believed by Roger Sherman and a majority of those at the Constitutional Convention that un-backed currency would so damage the fabric of the nation that they ATTEMPTED to prohibit it with these few words at Article 1, Section 10, requiring the states to enforce the prohibition: “No State shall…make any Thing but gold and silver Coin a Tender in Payment of Debts;”

If the people and their states grew inattentive to this matter (and they have!), Jefferson also saw this problem ahead:

In a letter to John Taylor in 1816, he wrote, “And I sincerely believe, with you, that banking establishments are more dangerous than standing armies; and that the principle of spending money to be paid by posterity, under the name of funding, is but swindling futurity on a large scale.”

We have been “…swindling futurity…” for a long time and this is now where we find ourselves. If the government, through its banker masters at the Federal Reserve, can create “money” from thin air, they certainly don’t need ours every April 15th. That annual sheep shearing is simply an attempt to vacuum enough of the excess paper from the system to keep the rest of us from catching on to the biggest theft ring in the history of man. They have now created so much that their attempt is failing and failing badly to a point where all but the dullest among us (Obama voters and his growing cadres of personal and corporate welfare beneficiaries) are starting to “get it.”

If you understood that last paragraph, you can now make the small leap to an understanding as to why the “progressive” utopian welfare state hacks in Washington don’t give a damn WHAT you think. Their power to create all the “money” they need to fuel their infernal machine and fill the gaping maws of enough of those hoards of welfare constituents to assure their perpetual re-election means that — ready — THEY NO LONGER NEED YOU! They have become, as Mr. Jefferson predicted, our MASTERS.

That they are taking down a nation and a system that has provided more wealth, safety and abundance to more people than any other in history matters not to them. Failing to grasp the lesson of the French Revolution, they believe themselves to be above the impending disaster.

We’re running out of time to get this increasingly rapacious beast back into the cage from which we have carelessly allowed it to escape.