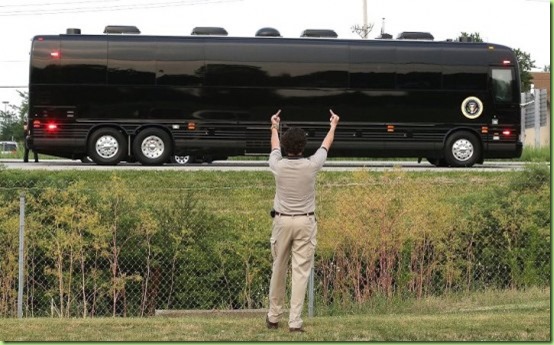 Perhaps I could just stop here

Because there wasn’t much of anything else of import going on,Big Guy took to the open road last week to resume his mythical “How I saved America” tour.

“What we’ve got to do is to build on the cornerstones of what it means to be middle class in America -- a good job, good wages, a good education, a home, affordable health care, a secure retirement.  That’s what we need to focus on.”

Then he spent the balance of his time explaining how the Republicans are to blame for not letting him focus on any of them.

(SNIP) The real highlight of the tour was the appearance of an unexpected protestor in Syracuse: 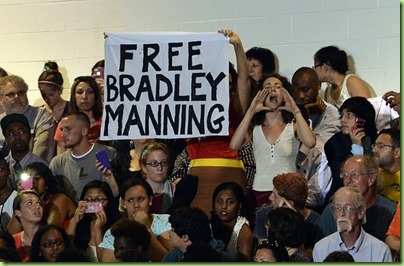 Because you can never have too many traitors in your midst

It was unclear if she was protesting the conviction of a traitor or was simply in favor of transgender sex reassignment for convicted traitors. Either way, Big Guy handled it with his usual aplomb:

Then he complimented the protestor for being very polite, and noted that:

…she brought up an issue of importance, and that's part of what America is all about.

So of course, they threw her out...

Obama and Holder are publicly speaking about their ‘plan of the week’ that are just more smokescreen distractions to divert attention away from the incompetent manner Obama has handled his day job.

The best indicator of a PHONY ADMINISTRATION is the number of its REAL SCANDALS.

Commie Tyrant Obama’s current talking points are thus smokescreen distractions for the products of Obama’s first 4 years in office:
* Refusal to close US Southern Border to Mexican illegal alien invaders
* No known un-forged records of Place of Birth
* No known un-forged records of University grades
* Benghazi Massacre
* Dereliction of Duty as CIC during Benghazi Massacre
* Cover up of Benghazi Massacre
* Destruction of Seal Team Six
* Cover up of Fast and Furious murder of US Border Agent by Exec. Order
* IRS-Obama’care” Commune Death Grip on Wealth and Health
* NSA-Gestapo Death Grip on all citizen’s communications
* Use of Courts against News Media
* Use of Supreme Court to install Un-Constitutional Obama’care’ Tax
* Destruction of the US Coal Industry
* Refusal to permit XL Pipeline construction
* Trillion Dollar a year Federal Overspending
* Monthly violations of the US Constitution by Obama
* Use of Exec. Orders to bypass Congress.

Speaker Boehner’s job now is to shut down the NON-ESSENTIAL parts of the US Federal Government until Obama’care’ is ABOLISHED, and keep it shut down for however long it takes.

Obama will continue to ruin America as long as Boehner is Speaker of the US House of Represenatives.

Four + years of Boehner has proven Boehner to be unfit to combat Tyrant Obama.

It is now up to the Members of the House to replace Boehner so that the new Speaker can shut down the non-essential parts of the US Federal Government ASAP in order to ABOLISH Obama’care.’

would he rather campaign than govern? would he rather do this Saul Alinsky crap of attacking the GOP for talking about phony scandals, rather than getting in the trenches and working to solve our problems?

Is anything ever his fault?

I marvel at the fact that liberals never let me down. They consistently confuse "cause" and "effect". Good jobs, good wages, and all these other benefits are the "effect". You can't create them in isolation. They are the reward for national and individual productivity.

Does taxing a worker and redistributing his wealth to others based on some government criteria constitute "productivity"? Of course not. Is there any possibility whatever that the government can spend its way to national prosperity. Of course not.

What do we have to show for the twenty trillion dollars of national debt we acknowledge and the hundreds of trillions in unfunded liabilities? I wish I could say, "Nothing".

Unfortunately, what we have is indebtedness for several generations to come and a financial meltdown of historic proportions.

He is still out campaigning - in mid 2013 - for a bill that was passed into law in 2010. WHAT A MORONIC CLOWN, AND HIS WORSHIPERS ARE EVERY BIT TO BLAME. Do you hear the roaring screams of adulation and applause when he attends one his calls to worship - always on a millennial campus?? Why doesn't he ever attend an event were real adults go?