Sara Palin is a gifted politician. Her love of country is as clear as a winter's day.

She could be a good president, maybe even a great one, depending on circumstances. She has all the attributes of a leader: she's personally charming, down-to-earth, she's attractive, but her writing drives me crazy!

Every sentence she composes or utters in real-time is a convoluted mess of subordinate clauses. Every idea introduced gives way to a meandering aside, a parenthetical more 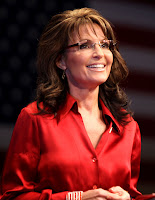 That is unfair. I am a woman and i LOVE Sarah! I can’t remember ever disagreeing with her. But her voice grates on my nerves, and I believe her writing could be better expressed. Everyone can improve themselves... even our Sarah.

“...a convoluted mess of subordinate clauses...”

I prefer the term “word salad”, and I find it unbearable. Listening to her speak make me wonder if she is actually responsible for some of the writing attributed to her.

Then why the hell did you excerpt it?

Look I am a big Palin fan.

Part of what I’m saying is just busting your chops. But part of me is seriously a tiny, slightest bit. Ever so slightly irritated at the amount of criticism Palin takes.

Sure I get it, sort of. A woman candidate needs to prove herself beyond all the usual stuff.

But frankly Palin has done all that. That is all I am saying.

How about pointing out what Palin is saying which makes sense?

Even Palin is not perfect.

Reagan was good in large measure thanks to the years he practiced his acting craft, but he, the man, wasn't an act and his American beliefs and ideals were not a script or a speech prepared for him, but were formed and tested through his scholarship and study and our multiple hot, warm and cold wars.

Sarah Palin is a natural and seems to have the American heart and mind, but not the practice and it's not likely she'll get what she needs off the campaign trail or out of office and away from the constant exposure and speaking practice.

After thinking over their methods and results, I can't shake the feeling that McLame picked her simply to take her out as a future candidate.

Nothing about McLame's candidacy said "I want to WIN!" He and Romney both appeared as though they had no intention of winning any election other than the Republican primary.

The results speak for themselves.

I agree with you that the harmonic quality of her voice does have “issues”. What she has to say expresses MY views.

I am willing to pay taxes for Elocution sessions while she is in the Oval Office for 8 years.

I agree, she’s saying the right things, just in a near incomprehensible way. It makes people who are in the communications biz, like myself, shudder-—people who would otherwise listen. I’m happy to rewrite her, in real time, but I’d have to be surgically implanted or have a direct wifi connection-—like in Pacific Rim the new movie. But that’s crazy talk.

Option 1: A liar and schemer who speaks well. Option 2: A patriot who garbles, sometimes without realizing it, syntax, but usually, through not always and never, ya know, never misleads or even, no matter how great the risk of personal and family pain, would even think of being anything other than a stand up, no apologies American. I’ve made my pick.

It’s weird that you would complain about this to us.
Mrs. Palin is not in hiding or unavailable. I believe you
can contact her in many ways. Twitter, Facebook etc.

She probably doesn’t know about the issues you bring forth.

In fact, she’s waiting for someone like you to help her be the best Sarah Palin she can be. Now we know why she’s not our president. And you, just you, can fix it. All you need to do is CONTACT Mrs. Palin and tell her about her poor sentence structure. Then the United States will be saved!

Just stick to your president and don't concern yourself with SARAH!

That's like growing a tomato plant and saying you're in the agriculture business.

I think McCain was a lousy candidate, stiff, awkward, old, and untrustworthy. I also believe he became jealous of Sarah on the campaign trail. He needed her, but he resented her. What a terrible position for Sarah. The conflict must have made him furious.

Regarding Romney, I think he wanted to be President, and I actually thought he was going to win. One explanation is that he didn’t because Obama and the dem’s stole the election. History might tell.

Has the writer ever heard Obama? He speaks at the junior high level.