Happy Birthday America! And I wish to offer my deep, deep thanks to our founding fathers for giving us the gift of liberty.

And I see the Egyptians have decided to celebrate along with us this year. 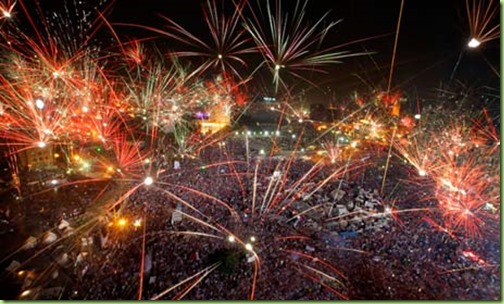 Unfortunately, Egypt demonstrates what happens if your Declaration of Independence was not such a finely-crafted, well thought out articulation of political philosophy: you end up with a constitution that’s not as keen on liberty as ours. In that event, the next thing you know, you’re being governed by another tyrannical dictator.

I’m not saying that what’s happening in Egypt could never happen here: after all, we were warned by several of our founding fathers that liberty requires constant vigilance. All I’m saying is they did their best to guard against it.

With that, and Ronald Reagan’s reminder that freedom is never more than one generation away from extinction, MOTUS would like to encourage the reemerging tradition of reading aloud the complete Declaration of Independence on Independence Day. As you gather with friends and family to celebrate the crafting of the world’s most perfect union, please take 10 minutes to read this splendid document founding a splendid republic (links to the audio, video or JFK reading of it).

The JFK reading was done in 1957 when John F. Kennedy was still a Senator from Massachusetts. Despite the fact that he was a duly elected Democrat, by today’s standards he would be considered more conservative than most elected Republicans. I can only conclude that it would be a good idea to require all sitting presidents to read the Declaration of Independence before they are sworn into office to uphold the Constitution.

I thought you might also enjoy Paul Harvey’s reminder to us that, unlike all other revolutions before and after - where the rebels had nothing to lose - our founding fathers put everything on the line. Watch and listen as the clarion voice of Paul Harvey tells us the price our forbears were willing to pay for the gift of liberty. Listen to the proverbial  “rest of the story.” Hear him tell the fate of those 56 men who learned that liberty is so much more important than security that they pledged “…our lives, our fortune, our sacred honor” to ensure it. 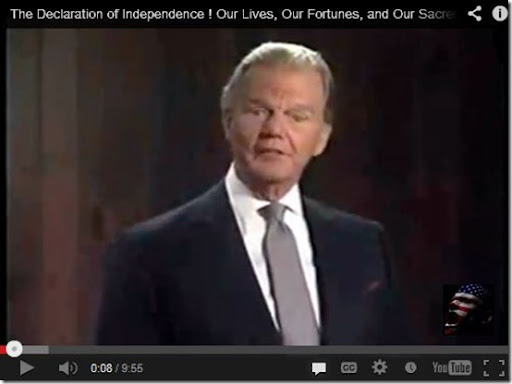 America: please don’t give away so cavalierly that which these great men gave so much to establish.

And now, since it’s important to celebrate this great holiday, here’s a little something from The Lonely Libertarian that will kick your 4th of July s’mores up to notches unknown. I think these pictures provide all the recipe you’ll need:

Warning: do not eat more than a dozen

Stick a sparkler in it and you’ve got yourself one heck of a birthday cake. 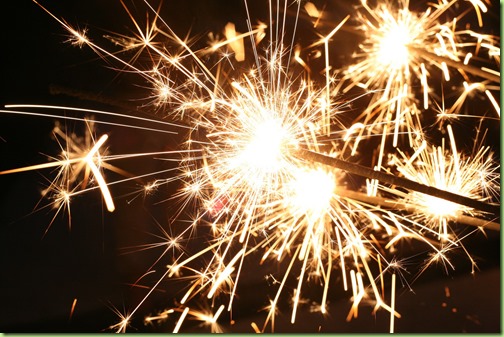 The quest to institute or revive Freedom can be an ugly duckling. It’s the beauty of the swan that emerges that makes it all worth while.

2 posted on 07/04/2013 6:40:14 AM PDT by trebb (Where in the the hell has my country gone?)
[ Post Reply | Private Reply | To 1 | View Replies]
To: NOBO2012
You wrote:
Unfortunately, Egypt demonstrates what happens if your Declaration of Independence was not such a finely-crafted, well thought out articulation of political philosophy: you end up with a constitution that’s not as keen on liberty as ours.

For a normal, Judeo-Christian, Western, cultured, liberal-thinking population such as the one that existed in the colonies in 1776, yes, you are 100% correct but to compare it to the Egyptian masses seems like a very inaccurate comparison.

It is not just about the document and how it is crafted. IT IS ABOUT A MATURE POPULATION OF FREEDOM LOVING INDIVIDUALS READY TO ACCEPT ALL THE PRINCIPLES LAID OUT IN THAT DOCUMENT AND NOT THE DOCUMENT ITSELF.

You think the Arabs in ANY Arabic or Persian nation today are anywhere near the enlightenment of our 18th century forefathers? You think they are capable of signing such an amazing document with a feathered quill pen? I mean that pen is space age technology for them! 237 years ago, many of the colonists were illiterate. Today, the vast majority of the Arab world is illiterate and their leaders keep them that way.

It will take at at least another 500 years for the current Arabic populations on the planet in this 21st century to get somewhat close to the mindset of our 18th century forefathers and even that bet is a longshot! Happy Fourth!

It's the content of the people, not the document only.

Sorry, I was not aiming this missive at you but rather the author of the original post...

They achieved that level of civilization through hard work, blood sweat and toil (Churchill?) but it took a strong belief in G-d (not Allah), the vision for a better humanity and an ability to develop civil tolerance and an acceptance of others.

The Arab-Muslim world is still living in the Dark Ages (and it pains them because they know it) and are not showing any signs of REAL development.

I am not talking about the UAE, Kuwait, Bahrain or Saudi Arabia Petro-wealth and skyscrapers and ski resorts in the middle of the desert. These are superficial but what about the content of their perspectives on the world?

I am talking about their maturity as a people. Their ability to tolerate others like Jews and Christians. They simply are not there yet and now they are in the middle of an epic religious struggle between Sunni and Shiite.

So, not only are they NOT developing (despite the wealth) they are GOING BACKWARDS! They are setting themselves up for failure.

Most of their countries are FAILED-NATION STATES and it puzzles me (not really) why they want to establish a 23rd state called “Palestine” in the middle of the ADVANCED Jews of Israel.

So the world wants to create another FAILED ARAB NATION STATE called “Palestine”, eh? What pathetic joke as we all know how it is going to end up, like the rest of the savage Arab world as we are seeing in the streets of Cairo with hundreds of women being raped.

Give me a break! Even the Palestinians are divided in that they have the Palestinian Authority in the West Bank and HAMAS in Gaza. They can't even friggin’ decide who represents themselves so who is Israel supposed to negotiate with, if at all? Wake the f**k up Western world! Look at Egypt! 90 million people, total chaos...