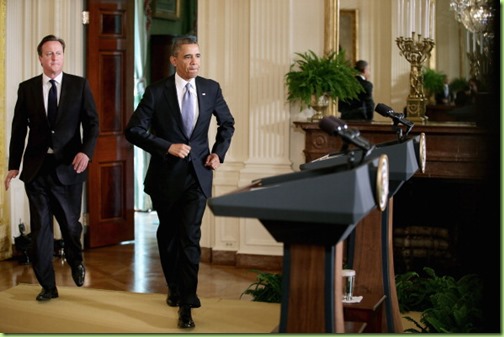 Prancing to the podium, with British Prime Minister David Cameron trailing behind

First up: the IRS.

PRESIDENT OBAMA: Well, let me take the IRS situation first. I first learned about it from the same news reports that I think most people learned about this. I think it was on Friday. And this is pretty straightforward.

If, in fact, IRS personnel engaged in the kind of practices that had been reported on and were intentionally targeting conservative groups, then that's outrageous and there's no place for it. And they have to be held fully accountable, because the IRS as an independent agency requires absolute integrity, and people have to have confidence that they're applying it in a non-partisan way -- applying the laws in a non-partisan way.

Uh, the IRS already admitted that they “engaged in the kind of practices that had been reported on” Mr. President. (disengaged, uninformed, ergo, not responsible: good!)

Let’s move on to Benghazi; see if you can spot what’s wrong here:

The day after it happened, I acknowledged that this was an act of terrorism. [and we know that, because Candy Crowley said you did] And what I pledged to the American people was that we would find out what happened,(snip)

And the emails that you allude to were provided by us to congressional committees. They reviewed them several months ago, concluded that, in fact, there was nothing afoul in terms of the process that we had used. And suddenly, three days ago, this gets spun up as if there’s something new to the story. There’s no “there” there. 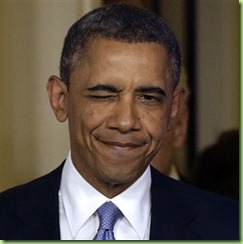 The whole issue of talking points, frankly, throughout this process has been a sideshow.

I don’t know about you, butt I’m having a little trouble following both the timeline and the logic: the day after it happened it was “an act of terrorism,” butt “five, six days after the event,”  per the talking points - that nobody in the Big White was responsible for – we once again believed the attack was the result of a bad movie review?

No wonder Big Guy dismissed this whole mess as a “sideshow” – in that charming, youthfully peevish way of his:

Now, on to the next scandal: the illegal seizure of Associate Press phone records in order to sniff out a government leaker. Boy, we may have really stepped in it this time. Even dumb animals know that you don’t crap in your own nest. If we’ve started to apply Chicago Rules to our lapdogs, we must have everyone quacking quaking in their boots. 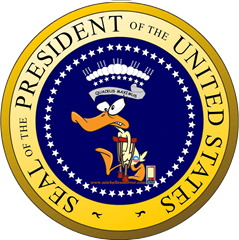 Wait- this just in: we didn’t know anything about that either!

“Other than press reports, we have no knowledge of any attempt by the Justice Department to seek phone records of the AP," White House Press Secretary Jay Carney told reporters in New York Monday night.

So let’s recap; recent decisions/actions that Big Guy and the Big White had essentially nothing to do with:

2. the IRS targeting conservative organizations (and individuals) for scrutiny (and audits),

Q Jay, does the President think it's appropriate for Secretary Sebelius to be raising money from private groups for an outside group for Obamacare implementation?

MR. CARNEY: I saw that story this morning. I've been focused on other things, so I don’t know that much about it.

I thought the concept of official Press Briefings was for the Big White to brief the press, not the other way around. 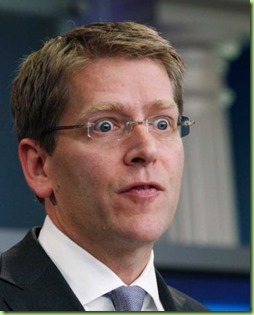 Either way, as you can see, this is a very dangerous trend - spying on the press I mean. I don’t think we can afford to tick off our lapdogs. Especially if Big Guy’s going to continue to rely on his media sock puppets for all of his news. 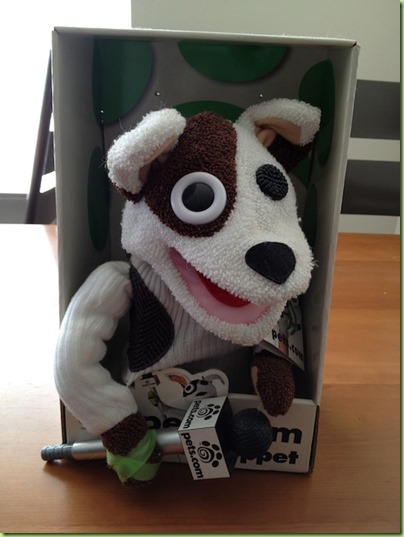 “Throw me a bone and I’ll tell you what’s going on over at Agriculture with Pigsford.”

Now do you see why we have to spend so much time at fundraisers?  It’s going to cost a lot of money to squelch all these non-scandals (that we didn’t know anything about).

BO arriving for 3 fundraisers in NYC yesterday. Don’t worry, there’s no “there” there.

Barack’s “Depends on the what the definition of ‘is’ is” moment.

How about posting it here instead?

And are you ever going to make any comments?

Obama does a lot of Prancing, in fact it’s what he does best.

I can see it is plausible that they actually did this on their own. The way to Judge Obama on this is to see what he does about it.

I would bet we won’t lose a one of those involved.

Imagine what the forum would look like if every FReeper that has a blog posted it here.
5 posted on 05/14/2013 7:32:26 AM PDT by upchuck (To the faceless, jack-booted government bureaucrat who just scanned this post: SCREW YOU!)
[ Post Reply | Private Reply | To 1 | View Replies]