Twitter exploded last night, after Bob Woodward revealed that White House official had warned him he would “regret” saying Obama had moved the goal posts on sequestration.

Predictably, conservatives latched onto this, as it confirmed our suspicion about the Obama Administration’s “Chicago-style” of politics. A lot of mainstream journalists bought into this, too — reflexively believing anything the great Bob Woodward says.

Of course, Woodward (who was expert at trolling for publicity before the internet even existed), benefits greatly from the publicity (nothing sells books like controversy).

No, Woodward did not troll us.

What is being lost in all of this, is that Woodward got about a 30 minute earful from the White House, and that earful wasn’t whispered sweet nothings, either.

And Lanny davis and Fournier have been on the receiving end, too.

Should I know Matt Lewis?

Expose corruption in ALL Washington politicians--and journalists--as you did Nixon, and you will prove that you are a truth seeker rather than a partisan hack.

Your failure to expose corruption in the Presidential Administrations that followed Nixon's cast serious doubt on your motivations.

Your insightful comment points out the underlying mentality of the oppressors.

They seriously believe they are owed obeisance from the press.

They see it as their INGSOC. Threats are just part and parcel of keeping their troops in line - kind of like the First Sergeant chewing out the Privates.

I don’t think that it is the Chicago way, actually, I think it is Hillary’s revenge.

Watch all of those who are loyal to her line up against the Obamas.

Trotting Michelle out everywhere was always going to make her annoyed.

I apologize for raising my voice in our conversation today. My bad. I do understand your problems with a couple of our statements in the fall — but feel on the other hand that you focus on a few specific trees that gives a very wrong perception of the forest. But perhaps we will just not see eye to eye here.

But I do truly believe you should rethink your comment about saying saying that Potus asking for revenues is moving the goal post. I know you may not believe this, but as a friend, I think you will regret staking out that claim. The idea that the sequester was to force both sides to go back to try at a big or grand barain with a mix of entitlements and revenues (even if there were serious disagreements on composition) was part of the DNA of the thing from the start. It was an accepted part of the understanding — from the start. Really. It was assumed by the Rs on the Supercommittee that came right after: it was assumed in the November-December 2012 negotiations. There may have been big disagreements over rates and ratios — but that it was supposed to be replaced by entitlements and revenues of some form is not controversial. (Indeed, the discretionary savings amount from the Boehner-Obama negotiations were locked in in BCA: the sequester was just designed to force all back to table on entitlements and revenues.)

I agree there are more than one side to our first disagreement, but again think this latter issue is diffferent. Not out to argue and argue on this latter point. Just my sincere advice. Your call obviously.

My apologies again for raising my voice on the call with you. Feel bad about that and truly apologize.

Gene: You do not ever have to apologize to me. You get wound up because you are making your points and you believe them. This is all part of a serious discussion. I for one welcome a little heat; there should more given the importance. I also welcome your personal advice. I am listening. I know you lived all this. My partial advantage is that I talked extensively with all involved. I am traveling and will try to reach you after 3 pm today. Best, Bob

I don’t know. The email was sent after the fact. It may not reflect the tone of the original statement. After all, it’s in writing. This administration doesn’t leave a trail if it can help it.

It was a trivial nudge... but my guess is that Woodard had been nudged one too many times by the WH and knows lots of others the WH has nudged. This time Woodward pushed back.

What is REALLY being lost is :

THE SEQUESTER WAS OBAMA’S IDEA.

(Woodward v. Sperling is the undercard.)

The moral of the story is: never trust a left wing partisan hack. He appeared to change his stripes, but that was so he could get some air time from our news channels.

Everybody comes to FR for the news, BTW

Some believe the sequester is a good idea, most do not. As far as whose fault it is? I do not care! The CBO states it will hurt the economy. The blame game does not fix the problem. Just my 2 cents.

18 posted on 02/28/2013 1:56:07 PM PST by chopperjc
[ Post Reply | Private Reply | To 14 | View Replies]
To: Laissez-faire capitalist
What is being lost in all of this, is that Woodward got about a 30 minute earful from the White House, and that earful wasn’t whispered sweet nothings, either. And Lanny davis and Fournier have been on the receiving end, too.

IMHO, this is just the tip of the iceberg, and really nothing new.

Or should I say.... should not be 'unexpected'.

19 posted on 02/28/2013 1:58:35 PM PST by UCANSEE2 (The monsters are due on Maple Street)
[ Post Reply | Private Reply | To 3 | View Replies]
To: Nachum; ntnychik; dixiechick2000; All
It's good that Woodward spoke out, he's already got the ball rolling with Clinton aide, Lanny Davis, and reporter Ron Fournier immediately jumping into the fray! 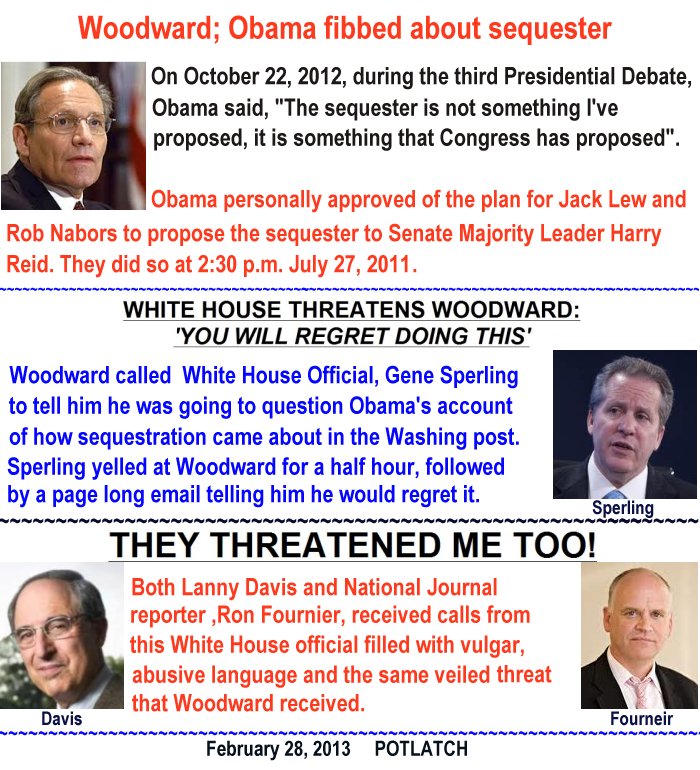