In the run-up to the 2012 election, a story surfaced about an Iraqi billionaire who managed to buy access to Washington policy makers while funding a Chicago Pay-to-Play scheme that helped produce a Governor, a U.S. Senator, and, ultimately, a President of the United States.

The story was eight years in the making, yet despite the extent of his political influence, this Iraqi’s name remains widely unknown. He wants it that way. In fact, he has spent millions of dollars to hinder the reporting of his activities by the news media. The lack of attention paid to him, however, is inversely proportional to his level of importance.

His name is Nadhmi Auchi.

Auchi is now a British citizen. He bought respectability in Britain and in Europe through both donations to charities and self-serving gifts to politicians.

He was once Saddam Hussein’s arms merchant. He morphed into Saddam’s main financial operative in Europe. Today, he is one of the richest men in the world, and has, over the last few decades, been a player in nearly every noteworthy, corrupt, international deal involving Europe and the Middle East.

He was convicted of fraud in a $504 million corruption scandal -- the Elf Aquitaine case – the largest corruption trial in French history.

He was a central figure in one of the largest corruption cases during the Iraqi reconstruction, involving $3 billion dollars.

His U.S. visa was revoked for his alleged facilitation of $30 million in bribes to American and British officials in Iraq.

Auchi was a primary beneficiary of the widely abused and notoriously corrupt U.N. "Oil for Food" program while he was the single, largest stockholder in the merged French megabank BNP Parisbas. The bank was a major conduit for the funds flowing through the U.N. program.

He also reportedly gained access to the White House over the course of four separate administrations, beginning with George H. W. Bush, through the Clinton era and that of Bush 43. And it goes without saying that he was intimately involved with the political career of one Barack H. Obama.

Auchi's Chicago proxy was a man named Tony Rezko, best known for his curious land deal with Obama. At the same time, Auchi staged his worldwide operations out of London. But Chicago was the Alpha and Omega of his empire.

With Rezko on the ground there, the Auchi-Rezko combine created an Arab-American network linking Chicago and the Middle East in ways that brought financial support to two promising, Illinois politicians: Rod Blagojevich and Barack Obama.

Rezko and Blagojevich now sit in federal prison convicted of corruption, but Barack Obama is the 44th President of the United States, thanks, in no small part, to early financial support from Nadhmi Auchi. Both are said to expect early pardons from Barack Obama.

Meanwhile, Auchi is believed to have maintained ownership of significant assets in Chicago, where Rahm Emanuel, once Obama’s Chief of Staff, now serves as Mayor.

Valerie Jarrett, a member of the Auchi-Rezko network, was part of both the finance arm of the operation and, having been born in Iran, also part of Auchi’s Chicago Arab-American coterie. Jarrett is now the principal advisor to the President and, reportedly, was recently discovered to have clandestinely negotiated with Iran on Obama’s behalf.

Auchi is said to have spent many years serving as a protégé of British Intelligence, brokering its needs in the Middle East and beyond. That connection, and millions of dollars, enabled him to bring his problem-solving capabilities to the attention of U.S. policy makers at the time of the First Gulf War.

The connections he developed during the war positioned him to become a key advisor to the Department of Defense (DoD) during the Reconstruction planning for Iraq. Auchi eventually leveraged his advisory role into becoming the central figure in Iraqi Reconstruction, which was plagued with corruption.

I learned these facts while assigned by the DoD to track illegal arms sales in Iraq. In that role, I learned that Auchi appeared to cover his tracks using his intelligence and political connections.

In 2008, the files which documented and confirmed what I had learned were transferred to the Chicago Office of United States Attorney Patrick Fitzgerald. Since then, that office has taken no action to pursue Auchi, or his network.

Similarly, the Chicago media has demonstrated only occasional and cursory interest in Auchi’s role in Chicago politics.

But then, Chicago is accustomed to accepting such skulduggery, see as it's the home to Al Capone and the Daley Machine, for starters.

It could be said that Auchi has considerable sway over Chicago City Hall and the White House. My guess is that his aim is to make a lot more money and to influence policy. Don’t bet against his ability to do both over the next four years. 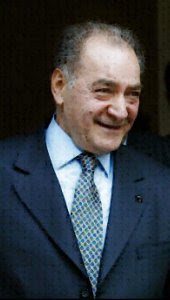 This is Nadhmi Auchi

Throw in Soros and the Clintons and you see The Big Con. The Democrats are making a killing off of killing. This is Barack Obama.

I believe anti-Moslem rage is coming out in the open, like very recently a woman who shoved a Moslem into the path of a subway train in NYC did it for revenge of 9/11, thats a ten year grudge surfacing.

Sounds like the kind of guy you won’t find on the White House guest list. Obama goes to visit him.

She is not an advisor. She’s one of the puppet masters. She’s there to deliver the orders to obama.

It’s about time Mulims faced the wrath of Americans.

> It’s about time Mulims faced the wrath of Americans.

I agree. How exactly should such wrath be delivered to Muslims?

I've often wondere who's on the other end of Obama's personal Blackberry. Perhaps, it is Nadhmi Auchi...