The over-nights are in, and it looks like the experts believe that, technically, Big Guy won the round on points butt is still losing the match. 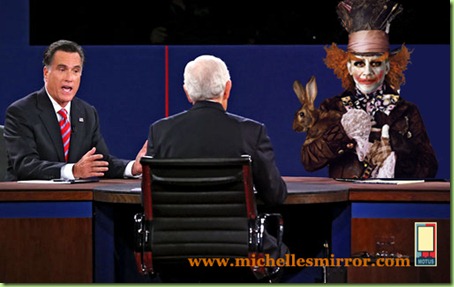 Boy! What’s a guy got to do to WIN around here?

Everybody says BO won the foreign affairs portion of the foreign affairs debate because Mr. Romney didn’t challenge him on his weak-cheese handling of Libya. Still, they’re giving the whole meghillah to the rich white guy because he won the economic debate (again) and looked more presidential (again)?

(snip)I know everybody was disappointed that Big Guy didn’t get a chance to smack the Governor down again going after Big Guy’s (mis)handling of the Libya terror attack. Apparently Mitt decided to dodge that snare for fear of getting dragged down into the same rabbit hole the Preezy dragged us into(snip)And it’s too bad, because Big Guy was really loaded for bear on Benghazi-gate this time(snip)

Here are just a couple of the little white-rabbit lies that we had to deploy in order to WTF: 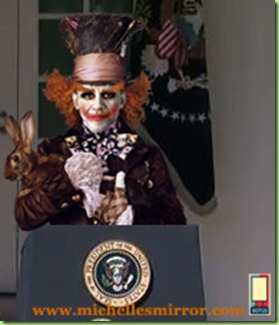 So, Governor Romney’s take away message: "President Obama promised to begin to slow the rise of the oceans and heal the planet. MY promise... is to help you and your family." And Big Guys: “Make sure you keep those Chinese tires properly inflated, I promise to overrule Congress on sequestration, and let me just remind you that I whacked Osama.”

Keep it up, Barry. Americans LOVE having snarky little smartasses for their President.

Mr. Soetoro brought the Chicago street thug persona with him. Chicago is dogwhistle code for rassiss. Barry came across as an angry...... man.

Mr. Soetoro brought the Chicago street thug persona with him. Chicago is dogwhistle code for rassiss. Barry came across as an angry...... man.

He has NOTHING ELSE to talk about.