Uh oh! Did you see this? Russia convicted the Pussy Cat Riot and put them in jail for 2 years! 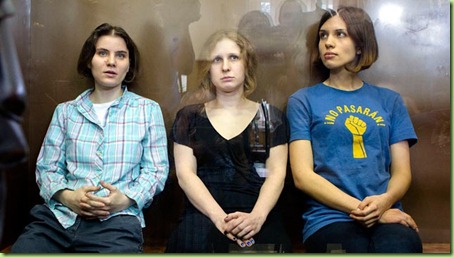 Just for making fun of President Putin! I knew this sort of hooliganism could be a career-buster, butt I swear - I did not know it was illegal! Maybe you can only make fun of Republicans...

...And as everybody knows, there’s really nothing to make fun of when it comes to our first postmodern, post racial, post partisan el presidente.

Meanwhile, did you see the latest unemployment numbers?

“the private sector is doing fine”

Been there, done that. Look up the Alien and Sedition Acts.

You cannot make anything without guts, and redistribution is not about governing but about handing out bread, let alone about raising the gut factor in a nation.

America is definitely pussy rioted, sad it is pussy rioted by an ugly muslim homosexual disgusting handling himself rather than some cute Russian girls. At least we would have to look at something and die in somewhat dignity.

Barry really should start asking himself the question: “Do I really trust the CIA, FBI, military and others?”

This man has pi$$ed off a good number of people in high places. I would love to be a fly on the wall when some of these folks are having very private chats.

Hey Barry, chaos is good only when you can control it. Never forget that.

Indeed. Those acts were given to us by our first liberal president. #2 for those keeping score at home.