Where, exactly, were our stylists? What do they think they’re on the Big Black Bus for, if not to avoid unfortunate photo ops like this one of Big Guy out standing in his field?

You sure don’t need me to point out the failed optics of this unfortunate metaphor: 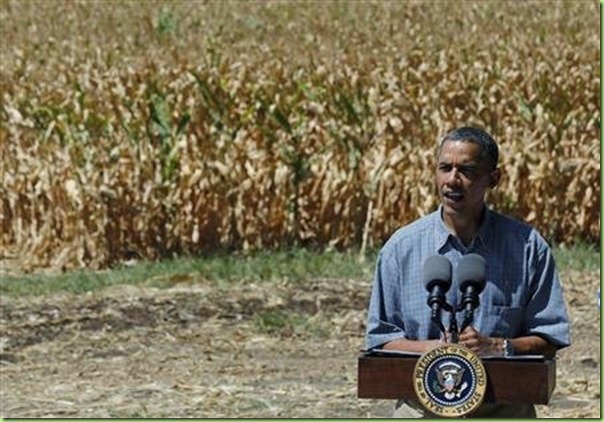 Four More years? Of this?

As our War Planner succinctly put it “How utterly metaphoric is this shot of our clueless POTUS standing in a drought-stricken Iowa corn field trying to ignite the magic of four years ago.”

Which one of the ladies-in-waiting thought that this tie-dyed “floral” apron dress with the .50 caliber ammo boob belt would show well on national TV? And which of our brilliant public relations and new media specialists thought that pairing Lady M’s statuesque physique up against a petite teenaged gymnast would be a good idea? I’d like to see their papers.

The unfortunate matchup made Lady M cranky enough that she couldn’t help butt lash out at poor 80 pound Gabby when she told Jay she celebrated her 2 gold medal victories by enjoying a McDonald’s Egg McMuffin. That was entirely out of character. I mean, how many times has Mo herself told us that an “occasional” treat is okay? And if winning double Olympic golds isn’t an occasion, what is? 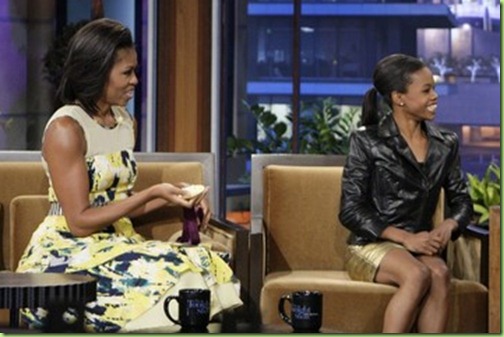 “My guns are bigger than your legs.”

...As I first reported on Saturday, the R2 team really got into Big Guy’s kitchen. Now it looks like they’re crawled right into his bread box.

Well, see for yourself; this just came in overnight...

But look at Michelle’s guns! SURELY she can do Gabby’s floor routine on her hands!t

Boy Gabby sure is cute.

His shirt is WAY too big for him. Looks like he borrowed one from someone so he could look appropriately “casual”.

I agree. The Obama team never thought Romney would go bold. With Ryan on the stump and Romney driving home the aggressive message, they can stay on the offensive all fall.

Obama/Axelrod wanted to drive Romney into a never ending series of defensive positions by making one scurrilous attack after another. The problem for Romney was he was doing well in his messaging, but there is no way to respond to these Bain attacks with a counter punch to go after Obama. It was a challenging situation for the Romney campaign. Now, they can turn around and attack Obama’s record and philosophy with every swipe at Ryan’s plan or the House ‘extremism’.

I am getting more and more intrigued by the fact that Romney made this choice...and that the accounts are HE made it despite some reservations by the consultants and his Boston team. He is either a much more wily political animal than I thought, or possibly even more ideological than we imagined on economics. Interesting stuff.

Arnold Schwartznegger upper arms look positively wretched on a woman. Can’t she put on something with sleeves.

6 posted on 08/14/2012 9:55:31 AM PDT by sportutegrl
[ Post Reply | Private Reply | To 1 | View Replies]
To: ilgipper
I can't say I told you so, but I can say "My wife told you so." She was telling me back in the primaries that Romney would be ruthless against Obama and that he conceals this ruthless nature in a smiley exterior. I was skeptical, but I think she's right.

I think the Romney team have done an exceptional job so far and the campaign "ain't your father's McCain campaign."

Be prepared for the Romney haters here to call you names. That’s all they have left.

Actually, they seem to be running out of steam with their bot-like posts. I think even they know they don’t have a leg to stand on, and that it’s Romney-Ryan or Zero. And who REALLY wants to support Hitler, even by default?

There are still a few cement-heads here who are too stupid to realize that not voting for Romney is voting for Obama. I can’t decide if they’re religious fanatics or just desperate for attention like 3-yr olds. Either way, I’m tired of their whining and name-calling.