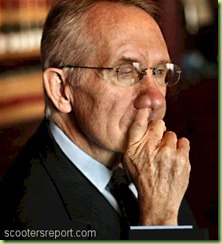 MOTUS: So what do you hear about Harry’s contention that Mitt Romney hasn’t paid taxes in 10 years?

MOLSTERMAN: As usual, it goes well beyond what you see and hear.

MOLSTERMAN: Well, for starters, there’s the fact that this signals that Harry the Brain has been promoted to head up the Class Warfare division of the Democratic National Committee. He leapfrogged right over Debbie Wasserman Schultz who – despite her willingness to hold forth any straw man argument no matter how vacuous and to say anything no matter how absurd – was not up to the task....

That’s when the big brains started getting desperate; without their usual load of manure they don’t know how to WTF. So they had Justice set up an anonymous hot line that anyone can call to report anything negative about the PRC (1-800-NAIL-MIT)... That’s where Harry’s “call from an investor at Bain Capital” came from.

MOTUS: So it sounds like “we tried our plan, and it worked!”

MOLSTERMAN: Not so fast.They ran into a slight problem: some of the punks in Romney’s camp found out about the task force and they’ve been pranking the hot line...

MOTUS: So Romney’s own camp’s calling in negative rumors about their candidate?

MOLSTERMAN: Yeah, occasionally, just to screw with them they call and say something like “I was in Romney’s administration when he was governor of Massachusetts and I can tell you he made everyone on staff wear secret Temple underwear.” Shit like that. But here’s the thing: mostly they're leaving calls about the Preezy...

Is it true that Harry Reid spent an evening with Obama and Rahm at their gay bathhouse? We hear these things, but never know what is true and what isn’t.