Uh-oh. Did you read that Ulsterman rag yesterday (h/t MichelleIndependent)? It relates a real tale out of school about how Team Romney punked Team Obama, and hoo-wee, it’s ug-ly! Right up my alley.

So here’s the Cliff notes version: Internal polling by Team Romney indicates he’s running a double digit lead in a key swing state (Florida? Michigan?) which they then “leak” to Team Obama in order to get inside their heads. And it worked! When word got to Val Jar, she turned into some kind of an Ultraman T-Rexian monster: 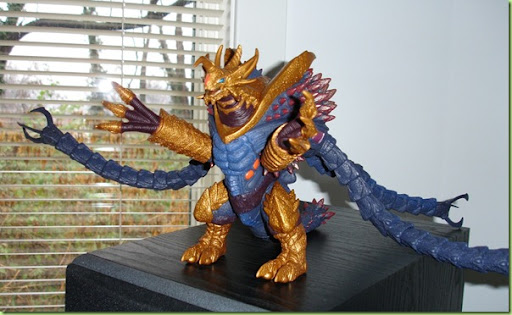 So anyway, with all of the turmoil in the campaign and because of our commitment to moving America FORWARD. I took the liberty of drafting an alternative plan for Big Guy that I think might help heal the nation: FORWARD. The Presidency to Mitt Romney...

TOPICS: Humor; Politics
KEYWORDS: bho2012; flotusmichelle; obama; romney
I HOPE Obama accepts MOTUS' plan!
1 posted on 08/02/2012 8:56:37 AM PDT by NOBO2012
[ Post Reply | Private Reply | View Replies]
To: NOBO2012
I realize this isn't from "Ulsterman" directly, but want to alert you that we've been asked not to post Ulsterman material on FR. The person who runs the Ulsterman site was Zotted from FR some time ago for threatening to sue FReepers. Background can be found at my link. I myself take anything relating to Ulsterman with a very small grain of salt...
2 posted on 08/02/2012 9:05:32 AM PDT by bcsco
[ Post Reply | Private Reply | To 1 | View Replies]
To: NOBO2012
she turned into some kind of an Ultraman T-Rexian monster:

Thanks for the pic for the context.

This doesn’t even make any sense.

This doesn’t even make any sense.
++++++++
Sure it does. The Insider is probably talking about PA or MI or perhaps MN or OR. One problem is we are expected to believe that the Dems had no recent poll of the state in question and were therefore shocked by the Romney poll. Right.

Is the story true? I give the chances that any of the Inside stuff is legit as approximately zero. A grain of salt at least is advised - maybe a teaspoon.

From the timing and content of that story, I took the state in question to be North Carolina. Much was made a few weeks ago of it falling out of reach of the Dems, despite their holding their convention there.