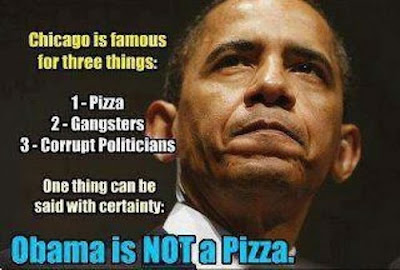 no but he’s as cheezy as it gets.

No, Obama is not a pizza.

Rather he’s an America-hating revolutionary musim African that wants to destroy this nation and the imbeciles that elected him president haven’t a clue.

Thanks, copied that to my arsenal.

4 posted on 07/23/2012 5:30:06 PM PDT by Positive (Nothing is sadder than to see a beautiful theory murdered by a gang of brutal facts.)
[ Post Reply | Private Reply | To 1 | View Replies]
To: Reaganite Republican
A "Sociopath" is characterized by at least 3 of the following:

1.Callous unconcern for the feelings of others.

2.Gross and persistent attitude of irresponsibility and disregard for social norms, rules, and obligations.

3.Incapacity to maintain enduring relationships, though having no difficulty in establishing them.

4.Very low tolerance to frustration and a low threshold for discharge of aggression, including violence.

5.Incapacity to experience guilt or to profit from experience, particularly punishment.

6.Markedly prone to blame others or to offer plausible rationalizations for the behavior that has brought the person into conflict with society.

For 1. He's a smart man. He knows that dependency is harmful, but he also knows that it's an easy way to power. Therefore he's selfish.

2. He runs his office without regard for the constitution, under cover of much of the media.

3. Look at the composite girlfriend story.

4. Drones anyone? It's easier than negotiation and under the cover of much of the media again who mainly say nothing.

5. Guilt from working against the majority?. No. Guilt from running guns into Mexico to prove a point? No.

6. Blame others? Now that's a target rich concept for his behavior.

He's starting to waddle and quack.