If you believe your ideology and rhetorical skills alone can resolve a deeply ideological conflict that has been raging for millennia in the Middle East:

…you might just be the most arrogant man in the world.

Butt here’s an offer that seals the deal on that honor: the Campaign to Give the Gift that keeps Giving Website is now open for business: The Obama Event Registry! 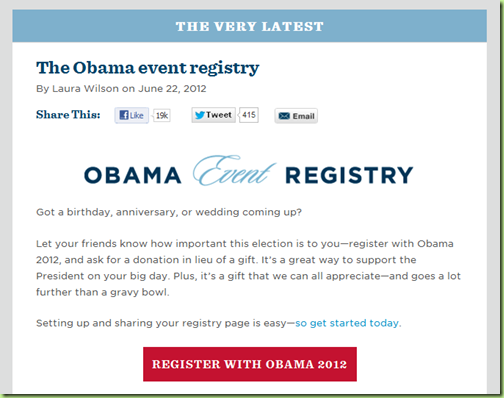 Of course all of you are invited and I HOPE you’ll be there and contribute while you still can!

Golly! Did Valerie Jarret do this for her daughter’s recent wedding? I think not.

0bama has resorted to begging for money . I am having a ball watching this dweeb crumble . While Boehner is asking us not to spike the football if 0bamascare is shot down by the SCOTUS ,, I plan to have a three day party starting out with a parade , fireworks , dancing bears and all the high calorie foods and snacks Moochelle has labeled off limits . Let me tell you, this will hurt bambi more than fast and furious.....

This is disgusting: stealing gifts from your wedding and birthday......

asking for these gifts is degrading to HIMSELF....a man who wants to be president begging you to give up wedding gifts....unbelievable, and people will not like this big time

All your gravy bowls are belong to us

Gonna be one hell of a 4th of July hey?

And Ashley Biden? Just got married weeks ago.

What about the droit du seigueur?