Lady M had to fly to Oregon on Father’s Day to give Oregon State’s commencement address...

She got her own hoodie when she received an “honorary doctorate in public health for her work as first lady on fighting childhood obesity and improving health.” 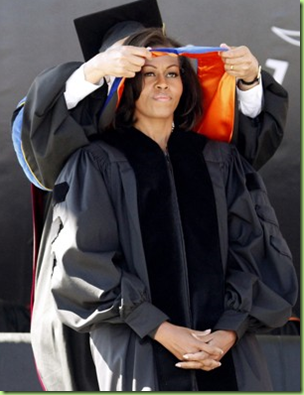 Obama also advised graduates to keep in close touch with the family and friends who are important to them, saying she never missed a chance to tell her father she loved him before he died from complications of multiple sclerosis. She fought tears as she recalled her mother’s assurances that her father was proud to be her dad.

“Liking them on Facebook doesn’t count,” she said. “Nor does following then (sic) on Twitter. What counts is making the time to be there in person.”

(Let the record reflect that Lady M wished the Wee Wons’ father a “Happy Father’s Day” via Twitter: "Thinking of two fathers I love dearly—the one who raised me and the one I married. Incredibly grateful for both. –mo," Tweeted from Lady M’s @MichelleObama account) The Wee Wons had to tweet him as well, as Big Guy was on the golf course for a little R&R time (5 hours) with the boys before taking to the skies for Los Cabos and a little one-on-one time with Puti at the G-80/20 conference.

Just one more example of the seemingly endless sacrifices both Lady M and Big Guy are required to make for us and the country. I don’t know how we’ll ever thank them properly. 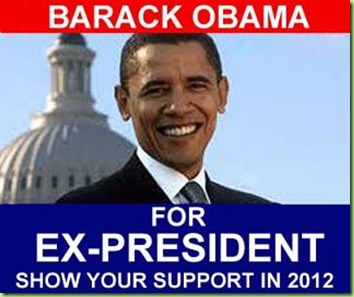 And the phoniness continues.

I LOVE that caption - Obama for EX-President 2012

Believe it or not, there is a FReeper out there with the screen name “Beave Meister”.

However, no response was forthcoming to my observation that men sometimes make the strangest requests.

I have seen that cartoon. :)