Towering hypocrisy right to the end... 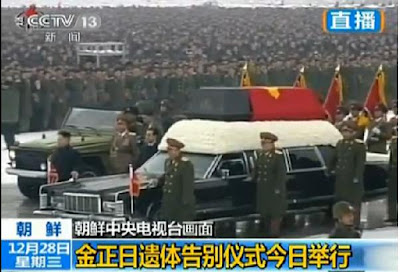 A number of news reports coming out of North Korea today purport the American-looking cars at the head of the Kim Jong Il funeral procession to be 'Russian limos'... but the first point of note would be that such cars were only manufactured in the Soviet era: the GAZ Chaika has been out of production for decades, and ZiL only recently made/restored a single old-style limousine to custom Kremlin order- an open parade-car looking nothing like the car above.
And as one personally familiar with all these designs (have touched and sat in every type of Russian limo ever made), I can assure you the USSR produced no model with the appearance of the cars seen in the DPRK over the last few days-  they have never even shown a prototype with hidden headlights with this sort of appearance.
But to look at the pics emanating out of Pyongyang yesterday, the large cars in the Kim Jong Il procession are plainly a mid-70s Lincoln -some of the largest, most indulgently over-the-top Detroit barges to ever hit the street- as the front clip is unlike any Soviet (or other) car (large US-reg 5mph bumper, for one), yet a dead-ringer for the FoMoCo products' stance and lines in the mid 1970s. 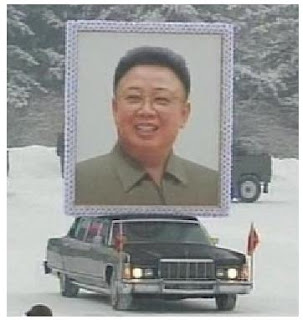 At first I thought 'That could never be!', Uncle Henry's velour-lined, 460 V-8 Detroit luxo-barges put on front-line display at a state funeral in the mostly harshly anti-capitalist Stalinist regime on the planet... but how the hell would the average North Korean know the diff? They've probably never even heard of a Lincoln Continental. All the regime had to do is take the badges off and lie about it... just like how they claim in propaganda designed for domestic consumption that the Pyongyang Metro is 'all their own' DPRK tech when it's a common knowledge everywhere else that they bought the (outdated) trains and control systems from East Germany back in the early 90s.
But the Norks couldn't even be bothered to scrape up a couple cars not so symbolically American and loudly bourgeois...? I know they're broke in North Korea, but the Chinese make big, tacky cars- couldn't they borrow a couple of their commie-fake-Rolls limos from the embassy? Shows you how stupid they their own people are, and they're probably right because they made them that way: must really be giving those poor saps the mushroom treatment over there if they've never heard Hot Rod Lincoln before (!).
On top of all that, the old man Kim Il Sun led his final, glorious march to the mausoleum in what appeared to be a Lincoln limo as well... right down to the oh-so-Detroit-70s 'opera windows' (covered this time).... this is in all likelihood the same car, broke out of storage:
Compare that the Kim Jong Il funeral procession yesterday as
shown on North Korean state television...
[YouTube]
Video/more at Reaganite Republican
_____________________________________________
Pyongyang Metro   BBC   Yahoo   The Australian   FoMoCo
TOPICS: Government; History; Military/Veterans; Politics
KEYWORDS: dprk; funeral; kimjongil; limos Navigation: use the links below to view more comments.
first 1-20, 21-32 next last
1 posted on 12/28/2011 2:48:19 AM PST by Reaganite Republican
[ Post Reply | Private Reply | View Replies]
To: Reaganite Republican

no engine...8 peddlers inside

Amazing...Keep the people ignorant...and they will adore you. So applicable in history and these times in particular.

For a moment there I thought baby Kim Gone Ill bought this Limo from Ebay.

He’s got to get the flat top hair cut and lose some more weight to look like his father.

I wonder if King Barry is REALLY in Hawaii?

10 posted on 12/28/2011 4:07:49 AM PST by Fresh Wind ('People have got to know whether or not their President is a crook.' Richard M. Nixon)
[ Post Reply | Private Reply | To 1 | View Replies]
To: Reaganite Republican
" On top of all that, the old man Kim Il Sun led his final, glorious march to the mausoleum in what appeared to be a Lincoln limo as well... right down to the oh-so-Detroit-70s 'opera windows' (covered this time).... this is in all likelihood the same car, broke out of storage: "

No , they didn't cover up the oh - so - Detroit - 70s " Opera " windows this time around either.
It's the same car, look in the first picture and you can see the opera window.

I meant to say, look at the 2nd picture with his huge picture on the top of the car, on the right side of the car you can see the opera window.

It’s the same playbook dimocrats use.

Baby Kim Jong-un ( Kim Jong-woon ) is also a basketball freak, so you do the math.

He got a Lincoln Continental,

He got a Taepodong II,

He got a Rodong in his pocket for fun

And nuke stuck in his shoe

“no engine...8 peddlers inside”

Actually, it would be equipped with a 460 cubic inch V8. Used this engine in Continentals, heavy duty pickups/vans and single axle trucks up to about 20,000 lb GVW.