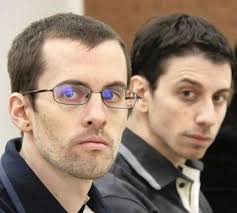 Shane Bauer, who grew up both in Onamia, Minnesota and San Leandro, California, is a freelance photojournalist and journalist who has worked for Pacifica News Service, Mother Jones, The Nation and other left-leaning media outlets, using his fluency in Arabic. Bauer and Fattal were friends from their days at the University of California at Berkeley.

Joshua "Josh" Fattal, who grew up in Elkins Park, Pennsylvania, an environmentalist and educator, had been from January to May 2009 a teaching fellow for the International Honors Program (IHP)'s "Health and Community" study abroad program. Prior to traveling with the IHP, Fattal lived and worked at Aprovecho in Oregon, USA, exploring and promoting sustainable living practices. Shortly after the release of the hikers, it was revealed that Jacob Fattal, the father of Joshua Fattal, is an Israeli expatriate living in the United States and that two of his siblings live in Israel. To avoid revealing the fact that Josh's father is an Israeli citizen, Josh's mother spearheaded the campaign for his release and his father avoided the media. Fattal had been to Israel on a few family visits. The last time Fattal was in Israel is 2007 for two weeks for his cousin's wedding. Jacob Fattal, against his son's wishes, likened his son's detention in Iran to the detention of the Israeli soldier Gilad Shalit, who has been held captive by Hamas militants in the Gaza Strip since 2006.

So whose trust fund paid the ransom? Joshie’s or Shane’s?