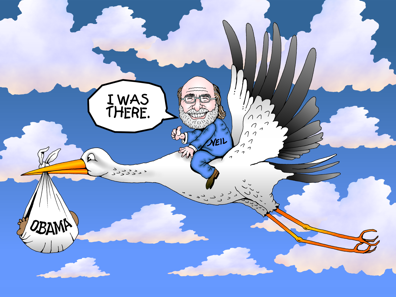 The Team Obama strategy of keeping quiet whilst painting the birthers as kooks and Nazis has crumbled to pieces in the wake of Hawaii Governor Neil Abercrombie's very public failure to produce an Obama long-form birth certificate, as pledged in December. Now it's back in the public eye, in a big way: even those who had kept the issue at arm's length are taking a fresh look at the birthers' much-maligned claims this week.

Neil Abercrombie had pledged to put the issue to bed for good... but has instead popped-open hornet's nest. So who is this odd duck, anyway?


Buffalo, NY native Abercrombie arrived in Hawaii just a month after it became our 50th state, in September 1959. Studying at the University of Hawaii, he earned a master's in sociology and a doctorate in American Studies. Abercrombie also attended classes with, and befriended, current United States President Barack Obama's parents, Ann Dunham and Barack Obama, Sr.

Dr Neil Abercrombie is married to political scientist and feminist activist/scholar Nancie Carraway, a radical Leftist who's work is best typified by her book "Segregated Sisterhood: Racism and the Politics of American Feminism".
Hawaii's seventh governor is an avid weightlifter who pledged to "lift his wieght plus 200" every year on his birthday.  At 72, he did just that last year by bench-pressing 272 lbs- not bad for a old hippy. 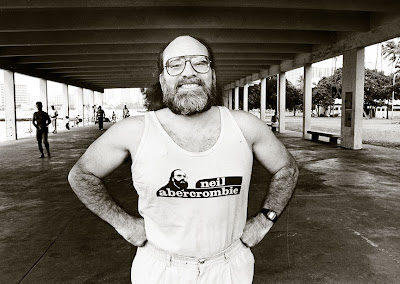 In 1970, he started out his political career thinking big, running (unsuccessfully) for the Democratic nomination to be Hawaii's US Senator at the age of 31. Dr. Abercrombie later served in Hawaii's state House from 1975-1979, state Senate from 1980-1986, then oddly won a special election in 1986 to replace Honolulu's US congressman (fulfilling the unexpired term), while actually losing the primary for the the seat's subsequent full term on the same day.

Following his truncated debut in DC, Abercrombie returned to the Rainbow State to serve on the Honolulu city council for two years, then went back to Washington as US Congressman in 1970, winning ten straight terms. Last year, he ran for Governor of Hawaii and cruised to victory over Republican James Aiona.

Abercrombie is a member of the House Progressive Caucus since 1998, and he votes like it, serving the extreme agendas of the ACLU, anti-war Left, and Planned Parenthood to a fault... and as it turns-out, the Socialist International as well (below).

And boastful blowhard Abercrombie has claimed to have "been there" when Barack Obama was "born in Hawaii" on August 4, 1961. But to those who know better, Abercrombie is "remembering" something that never actually happened...

Abercrombie has been talking excitedly about the relationship for years, playing John the Baptist to Obama’s Jesus.
“Little Barry, that’s what we called him,” Abercrombie told the Chicago Tribune while “recalling his days with Obama Sr. and his future wife, Ann Dunham, at the University of Hawaii.”  If Obama were born on August 4, 1961, however, there could not have been many such days.
As is thoroughly documented, Ann and little Barry were in Seattle two weeks later, where she enrolled at the University of Washington.  By the time she returned to Hawaii in late summer or fall 1962, Barack Sr. had left for Harvard for good...
According to divorce papers filed in 1964, Barack Sr. and Ann married in Wailuku, Maui on February 2, 1961.  But one has to wonder whether it was a marriage in anything but name, or whether there was a marriage at all.  Obama himself writes in Dreams, “In fact, how and when the marriage occurred remains a bit murky, a bill of particulars that I’ve never quite had the courage to explore.”
No one attended the wedding — not Abercrombie, not Ann’s parents.
In fact, no one in Barack Sr.’s clique seemed to know there was a relationship, let alone a wedding.  Neil’s brother Hal never saw Ann and Barack Sr. together.  Another clique member, Pake Zane, who had distinct memories of Barack Sr., could not recall Ann at all.
When Neil Abercrombie and Zane visited their friend in Nairobi in 1968, Barack Sr. shocked them by never once inquiring about his putative wife and 6-year-old son.

The 17-year-old Ann had met the 24 year-old Barack Sr. in Russian class at the University of Hawaii. Why they were studying Russian in 1960 (people like Lee Harvey Oswald studied Russian) is a question for another day...

So what is it that's driving this guy to keep stepping-in-it while attempting to rescue Barack Obama from truth-seeking birthers? Turns-out it's more than just family friendship and political loyalty- Neil Abercrombie's background involves the same sort of troubling communist associations that seem to keep popping-up from Obamas past, i.e. Alice Palmer and David Simon Cantor... with a trail that inevitably leads through front groups right back to the Soviet Union.

The covert socialist and "Democratic DSAer" Abercrombie was sponsored in his successful 1990 run for US Congress by the Council for a Livable World -a group promoting US arms concessions and non-intervention against Soviet aggression- founded in 1962 by long-time socialist activist and alleged Soviet agent, Manhattan Project nuclear scientist Leo Szilard, a Hungarian Jew and world socialist in the mold of George Soros. The DSA only supported two candidates in the whole country that year... and Abercrombie was one of them.

Neil Abercrombie and wife Nancie Carraway were also proven to be members of the Marxist Democratic Socialists of America, the largest such organization in the country and a front group for the Socialist International. He has of course denied the association, but evidence abounds, his wife even listed as having served on the group's "feminist commission".

And the DSA's strategy to take over the American Democratic Party from within sounds one-hell-of-a-lot like what Obama's doing...
According to an article written in the Boston DSA magazine Yankee Radical, January, 2001, by Mike Pattberg;

...the Communist Party experienced the height of its numbers, power and influence when it abandoned its previous ultra-left course to become the Stalinist wing of the New Deal in the mid-1930s...

In any case, by the early 1960s some within the Socialist Party (including future DSA leaders), adopting a variant of the CP’s strategy 25 years earlier, had broken with prevailing labor party orthodoxy. (Or the belief that the SP should continue to run its own candidates without support from labor or anyone else, another version of the same idea.)
They instead advanced the concept of “Realignment” in the Democratic Party; forging a coalition of labor, blacks and middle-class liberals and radicals to take over the Party by purging (democratically, of course) Southern racists, big-city bosses and other retrograde elements.

This goes a long way towards explaining why Blue Dog Democrats have been treated like impediments to progress, their input completely ignored by the Obama-Pelosi-Reid triumvirate: they are simply considered class enemies to be co-opted or removed by the true believers... like Abercrombie.
As far back as 1997, the DSA's ten-year plan stated goals where crowned by:


The group has also been involved with promoting out-there environmental, feminist, and slavery-reparations initiatives. Small wonder these stealth commies like Abercrombie and Obama are grinning all the time: Pelosi's Progressive Caucus already totals 83 declared members... ObamaCare rammed-through... and the Bolshevik Boy Wonder sitting in the White House giving us the finger, and all years ahead of schedule.
THAT's what Neil Abercrombie is all about... all we can do is pray that Obama doesn't move to silence this yammering idiot anytime soon: our country needs him... just keep talking, dude.

So soon "they" forget Vince Foster..
Actual murder of the Asst. Attorney General of the United States...
And "they" DISPLAY his body in Ft. Marcy Park.. in your face.. and dare somebody to do anything about it!!!..
And literally nothing is done about it!!!..

An errant birth certificate is nothing..
The "birthers" need to get SLAPPED into consciousness..
And to get busy on the real problems we face..

I am a new-born birther, lol- yesterday, to be exact. And I’ll tell you why

You know, I found the idea of a President Biden unpalatable (intentionally chosen to aid Obama’s job security, imo)... and felt that focusing on the ballot box was the quickest and surest way to rescue this country from the grim Obammunist era. I do not believe what this country needs from Congress will be achieved with Obama in the WH, period.

But a disqualified Obama presidency has wider implication than just his removal from office: the entire election would be null and void... Biden removed too... then likely Bush re-installed until new elections could be held. All Obama-signed legislation and czars would be rendered illegitimate and powerless.

If some obscure court ruling could manage to keep Obama in office for the time-being, at least he wouldn’t be on the ballot in 2012, and would be politically crippled.

Sound good to me- due to dedicated special interest constituencies, Obama’s approval has only dipped below 40% once... no matter how he wrecks this country.

And he needs to GO

How do you bitch slap a black man in office these days?..
Answer: You DON'T.. White liberals some of whom are republicans will not let you..

Blacks are a little more equal than others.. politically..
It sucks but its the truth for many reasons.. suggest a dose of reality..

Come on.. lift a glass of an adult beverage and SWALLOW...
Maybe, attend a TpCaucus rally or something..

You from the MoveOn Troll Patrol or something?

No I am from the Cat Herd Caterwall patrol..