With five bodies barely cold in Arizona after a madman went on a killing rampage yesterday, hateful liberals are screaming for the death of Sarah Palin. Palin, the Republican Vice Presidential candidate in 2008, has been in the limelight since her rise to nation-wide fame. Angry liberals are now blaming her for assassin Jared Loughner's rampage yesterday, and some are even calling for her death.

And no, there was not just one insane person on one insane website, but many cases of wackos calling for the death of Sarah Palin. Like this one from a commenter on TMZ:

Or this one from liberalforum.org:

Or this one from the incredibly disturbing website Wetworx in an article entitled (with language cleaned up) "HOLY S**T CAN SOMEONE PLZ KILL SARAH PALIN:" 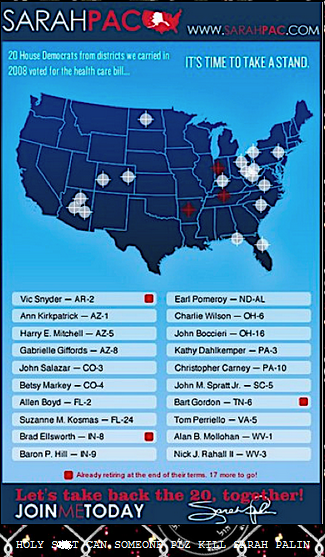 Very dangerous, and the media is the one fanning the flames. She gets death threats everyday anyway, and I hope that she has adequate protection. Those liberal freaks could care less about Giffords, they are just using this as an opportunity to have someone kill Sarah Palin and say that its justifiable homicide. They know the media would celebrate her death

Brink of war. How totally stupid. What insanity to post such things. Where is the government when such is posted? What are they doing about it? Hello....????

5 posted on 01/09/2011 6:46:38 PM PST by MeneMeneTekelUpharsin (Freedom is the freedom to discipline yourself so others don't have to do it for you.)
[ Post Reply | Private Reply | To 1 | View Replies]
To: therightliveswithus

Forget the idiot posters, let’s talk about the president of the United States.

Did George W. Bush ever talk about using a gun on his opponents?

Did Bush warn about violence (”hand to hand combat”) if the Democrats took over Congress?

Did Bush tell people to ‘get up in their opponent’s face’?

Did he talk about punishing his enemies?

The fact is, this is the most uncivil president we’ve had since Richard Nixon. That’s why this plea for civility is so damn ironic.

Liberals kill liberals and the liberals blame it on conservatives.

Attempt it and the Second American Civil War begins.

Chaos is always good for socialists

No, they kill the more Conservation liberals and blame it on Conservatives.

Good golly stuff like what I have read makes me realized Michael Savage was RIGHT, “liberalism IS a mental disorder!”

Should be reported to the fbi

It’s the folks that claim Palin was advocating shooting people who are responsible for this. They should stop the stupid, unprincipled arguments.

I have to say this again. Liberals are bunch of hysterical bitches when it comes to Palin or the Tea Party. Conservatives need to slap down the lies and hysteria that’s coming from the left.

It’s going to be more dangerous to democrats next election. I hope they keep this crap up. More republicans will get elected.

I will be right there with you!

Reminds me of the assassination of Franz Ferdinand. Then the $hit really hit the fan. Strange how history repeats itself.

Franz Ferdinand, aged 51, was heir to the Austro-Hungarian empire. He was married to Sophie Chotek von Chotvoka and had three children. Franz Ferdinand was, however, very unpopular because he had made it clear that once he became Emperor he would make changes. ....Bosnia/ Herzegovnia was controlled by Austria. Austria had annexed Bosnia in 1908, a move that was not popular with the Bosnian people.

Franz Ferdinand decided to visit Sarajevo, the capital of Bosnia and Herzegovnia, to make an inspection of the Austro-Hungarian troops there. The inspection was scheduled for 28th June 1914. It was planned that Franz Ferdinand and his wife Sophie would be met at the station and taken by car to the City Hall where they would have lunch before going to inspect the troops.

A Serbian terrorist group, called The Black Hand, had decided that the Archduke should be assassinated and the planned visit provided the ideal opportunity. Seven young men who had been trained in bomb throwing and marksmanship were stationed along the route that Franz Ferdinand’s car would follow from the City Hall to the inspection.

The first two terrorists were unable to throw their grenades because the streets were too crowded and the car was travelling quite fast. The third terrorist, a young man called Cabrinovic, threw a grenade which exploded under the car following that of the Archduke. Although the Archduke and his wife were unhurt, some of his attendants were injured and had to be taken to hospital.

After lunch at the City Hall, Franz Ferdinand insisted on visiting the injured attendants in hospital. However, on the way to the hospital the driver took a wrong turn. Realising his mistake he stopped the car and began to reverse. Another terrorist, named Gavrilo Princip, stepped forward and fired two shots. The first hit the pregnant Sophia in the stomach, she died almost instantly. The second shot hit the Archduke in the neck. He died a short while later.

Gavrilo Princip was arrested but was not executed because he was under 20 years. He was sentenced to twenty years in prison where he died of TB in 1918.

Its already begun...but you won’t hear it from the lame stream until conservatives start using REAL AMMO!

Ah, yes. Deafening silence when the Mexican drug cartels murder innocents, but wish harm on a responsible wife and mother. Gotta go remind some libs of the situation.
‘Bye!