We've seen this again with the recent vitriol spewed by NAACP head Ben Jealous (a fitting last name). Speaking at the NAACP convention in Kansas City, Jealous accused the Tea Party of, take a guess...cue the "Jeopardy!" music..."racism." Just as predictably, many conservatives are running around trying to convince everyone that, by gum, they really are swell guys. No, really. I'm not a racist. I don't beat my wife. I don't kick my dog. I eat my organic vegetables and drive a Prius.

Look, why don't we just save everyone the trouble? Every time a conservative renders an opinion, we can just play a recording with a little weaselly voice screeching, "You're a wacist! You're a wacist!" (Barney Frank-style) followed by a music video featuring The Cowering Conservative -- I mean 1950s-style, duck-and-cover footage, with the tune and all.

Why doesn’t Barack Obama make jokes about himself?

That would be racist.

If someone calls me racist I shrug it off without a response and continue to press my argument.

I like NASCAR, does that make me a race-ist?

"Oh, playing the race card? Weakest argument in the book. Now, as I was saying about the deficit ..."

Guilty as charged...see my tag line :)

You could also ask the accuser to cite where the constitution excludes the rights of racists.

Much more effective imho, to constantly accuse the left of racism. At the drop of a hat. Reflexively.

CONSTANTLY. Accuse the left: “that sounds racist” about any critical comment on race, instinctively. Whatever they say. Seriously. Just throw it out there, and if challenged, repeat it. Ad nauseum.

When (and only when) everyone tires of the word, it won’t work anymore. Even for the most marxist on the left the word will begin losing its effect if they themselves are regularly accused of it.

After all, they’re racists.

(see, already the word begins to lose its power)

Whenever the issue of racism comes up in debate with a progressive, I make sure to point out that it was always the democrat party that was the party that formed the KKK and that even up to today the most celebrated member of the democrat party, who has been given the most praise and promotions by his fellow democrats is KKK Byrd. Many progressives will try to make the argument that all the racists left the democrats to become republicans and vice-versa which then I laugh at them and point out that it was the progressive movement that was also hand in hand with the KKK democrats.

Woodrow Wilson, the progressive, was a KKK racist who showed KKK films at the White House and had denounced the Founding Fathers. Progressive Margaret Sanger also a racist spoke at KKK meetings. Progressive FDR locked up an entire race and appointed progressive KKK lawyer Hugo Black to the Supreme Court.

This means that when a Congressman Joe Wilson shouts "You lie!" at Barack Obama, you respond, "Representative Wilson was wrong. Obama lies a lot."

LOL! The author is spot on!

now, anytime someone describes something's color, I chime in "Rayyy-cissst!".

I don't know about anyone else but it cracks me up.
person A "I just got a puppy!"
person B "really, what kind?"
person A "a Black Lab!"
NS from out of the woodwork "you racist"

I totally don't get this.

The whole article is imploring “sap” conservatives to stop being so sappy.....fight back. Conservatives are always on the defensive, have measured responses to the left’s attacks. When Joe Wilson passionately yelled out “You lie!”, conservatives went running scared. The little defense there was, was to point out that actually he was being accurate about his statement. Instead, if they had hit back with “That’s wrong, Obama lies a lot,”, it would have taken the democrats off their attack game and put them on the defensive.

I just thought it was a funny response that I would have loved to hear from Boehner’s mouth.....but, that’s just me.

15 posted on 07/22/2010 6:41:38 AM PDT by pnh102 (Regarding liberalism, always attribute to malice what you think can be explained by stupidity. - Me)
[ Post Reply | Private Reply | To 1 | View Replies]
To: radioone
And understand something else: Leftists are cowards. They are creatures of the pack, finding their strength only in numbers. After all, what do you think being politically correct is all about? It means doing what's fashionable in our time, what makes you popular. A man who believes in Truth, such as Thomas More, will die for his principles, alone, twisting in the wind. A liberal goes the way the wind blows and will die for nothing. Stand up to leftists en masse, and they'll fold like a tent.

Thanks for the explanation. I completely agree. Somehow, I don’t think it came across clearly in the article.

I’m thinking that since they call me a racist, that I become one. But I just can’t. 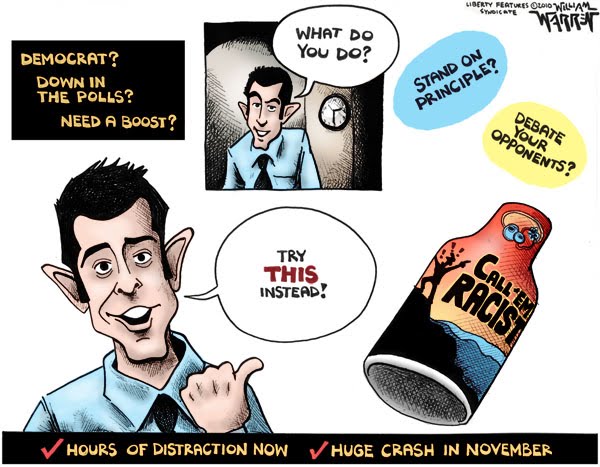 The question is not whether Euros will be called “racists” for finally standing up for themselves against racially-based attacks from non-Euros.

They should expect that. For almost 50 years, how many frank discussions (either on the personal or broader levels) regarding “race” have NOT ended with the accusation of “racist” being made by one side against the other?

The real issue becomes how Euros — on both the personal and “broader” levels of political dialogue — will continue to respond when such accusations are made.

And with that exchange, the argument has been defined, the battle already won and lost. BUT - who “won” and who “lost”, and why?

Well, the Euro has lost by even trying to defend himself or herself against the accusation. In this case, to respond that one “is not a racist” VALIDATES the accuser’s attempt to brand the recipient as such. It “makes racism real”, when that word is in truth a historical construct of the Left that is purposefully used against a certain ethnic/cultural group to silence them in the defense of their own culture and interests.

To respond to the race-baiters’ cry of “racist” by claiming that you’re not one, is to LOSE the argument.

“The victory” of the accuser isn’t won by proving that you ARE, beacause you’re already a racist, and have ALWAYS BEEN ONE, simply because you are of a certain ethnic/racial heritage.

No, that victory comes from your “defense” by claiming that you aren’t.

When will Euros begin denying them such victories?