To: aruanan
So, how old was Barry O in this picture with his paternal grandmother? I don't think it could possibly have been just four years ago.

According to this rather questionable pro-Obama timeline, he was 26 and it was 1988. Probably correct, give or take a year or three. Although there are reports of a 1981 visit as well. (If BHO was born in August of '61, as his posted "Certification of Live Birth" says, he would have turned 27 in August of '88) 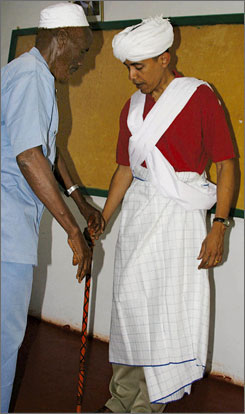 Sen. Barack Obama, D-Ill., right, is dressed as a Somali elder by Sheikh Mahmed Hassan, left, during his visit to Wajir, a rural area in northeastern Kenya, near the borders with Somalia and Ethiopia in this 2006 file photo. By the time he arrived in Kenya in 1987 for a month-long visit prior to moving to Boston to begin law school, Barack Obama had already learned some surprising truths about his father from his half sister Auma.