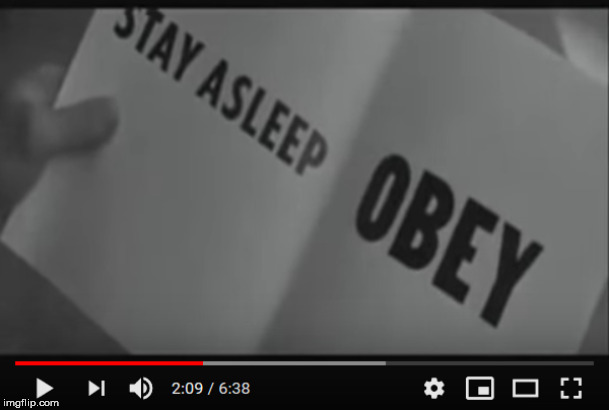 101,579 views
MrKarmaDude
Published on Jun 30, 2010
"A hit scene from the 1988 classic film "They Live." An economic crisis brings unemployed Nada (Roddy Piper) to L.A. in search of work. His discovery comes when he dons a pair of special sunglasses made by a resistance group and sees for the first time reality unadorned.
Billboards, store signs, magazine covers--all bear subliminal messages to OBEY, CONSUME, NOT QUESTION AUTHORITY to have NO INDEPENDENT THOUGHT. Money itself says THIS IS YOUR GOD.
What he finds instead is that the ruling elite of the world are aliens in disguise, their aim being to keep humans in a state of mindless consumerism. But worst of all, with these glasses you see which of us are really hideous, bug-eyed aliens.
The conceptual breakthrough is hilarious while keeping its roots in darker matters. Although some fault the film for settling into its action plot, the ending has a great payoff. And the direction by John Carpenter is handled with superb workmanlike aplomb."
https://youtu.be/sgAwdixodjw   6:38 mins no CC, not needed

If we let [They] censor and divide us, we lose.