But Chuck was also known for his political activism. He was originally a liberal Democrat, even supporting the Gun Control Act of 1968 (when asked why he did that, he replied, “I was young and foolish”).

But soon aftewards he became a conservative Republican. He eventually took the cause of the right to bear arms. He also compared supporting the Second Amendment to supporting the Civil Rights Movement by saying that he was promoting “freedom in the truest sense.” Chuck later became involved with the National Rifle Association, even being elected its vice-president (1997) and president (1998). His other political activism includes serving on the advisory board of U.S. English (which advocates making English the official language of the United States) and opposing calls for a nuclear freeze in the late twentieth century.

Now for some of his famous quotes:

“You can take my rifle … when you pry it from my cold dead hands!”

“From My Cold Dead Hands”

America sure could use President Reagan and Charlton Heston right now. We’re and deep kimchi right now and Baby Kim might be about to make it deeper.

Every time out country stands in the path of Danger an instinct seems to summons her finest first. Those who truly understand it.

When freedom shivers in the path of true peril it is always the patriots who first hear the call.

When loss of liberty is looming as it is now the siren sounds first in the hearts of freedoms vanguard the smoke in the air of our Concord Bridges and Pearl Harbors is always smelled first by the farmers. Who come from their simple homes to find the fire and fight, because they know that sacred stuff resides in that wooden stock and blued steel.

Something that gives the most common man the most uncommon of freedoms. When ordinary hands can possess such and extraordinary instrument that symbolizes the full measure of human dignity and liberty.

That is why those 5 words issue an irresistible call with all and we must. So as we set out this year to defeat the divisive forces that would take freedom away, I want to say those fighting words, for everyone within the sound of my voice, to hear and to head, and especially for you Mr. Gore “From my Cold Dead Hands”.

There, much more accurate...

5 posted on 04/05/2013 6:23:09 PM PDT by Old Sarge (We are officially over the precipice, we just havent struck the ground yet...)
[ Post Reply | Private Reply | To 1 | View Replies]
To: Old Sarge; All
Here he is with two of his fellow great Hollywood conservatives: the then future president and his future TV sister- 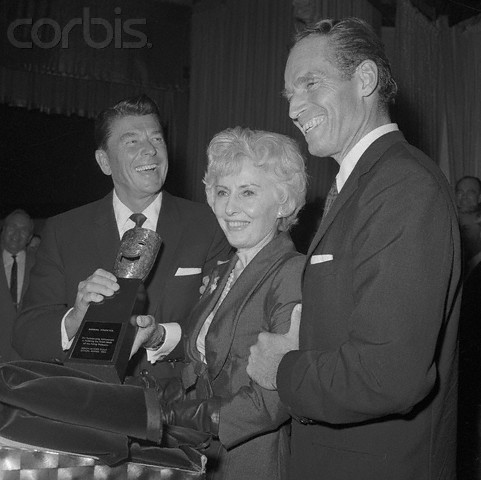 We shall not see their like again in our lifetimes.

Only thru home video.

Never before and not since, have we had such talent.

youtube is our friend channeling these cinema and entertainment greats.

Bob Hope's .. thanks for the memories. Thank you Mr. Heston, we miss you. 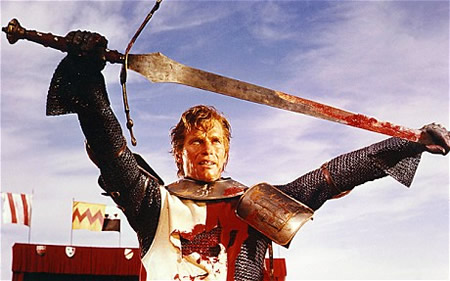 He was also very good as an aging cowboy in the esteemed western, Will Penny.

Other movies he made memorable.

The Naked Jungle (1954) Not a movie to see if you have Myrmecophobia, the fear of ants. In particular a 2-mile wide, 30 mile supercolony of army ants consuming everything in their path.

Touch of Evil (1958) With Orson Welles. Often called the best film-noir ever made.

Hesston was not the only one who turned conservative.

President Kennedy appointed Whizzer White to the Supreme Court and he was widely believed to be a liberal and sure enough he was.

“Take Your Stinkin’ Claws Off My Guns, You Damn Dirty ATF!”

I’ve seen all of those you mentioned.

I’m such a Heston fan I’ll even admit to having watched his only TV series, that silly but entertaining for its great cast(Heston, Stanwyck, Ross, Montalban, Beacham, Hedison, Parks) ‘80s soap opera “The Colbys”-

Love how they show an ocean wave behind Heston with his name credit. I wonder if that was supposed to be a subtle reference to the Red Sea?