The Easiest Way to Drain the Swamp: Relocate It to Tiny Everglades Across the Fruited Plain
A "You're So Vain" FReeper Vanity ^ | May 1, 2019 | Pocono Pundit

The Swamp is what Sebastian Gorka means the Permanent State, not the Deep State.

Gorka's right.  That's our number one enemy.  The Deep State may be more fiction than reality — with the exception of Lisa Strok, Comey, Boobamba, Sleepy Joe, and friends.

The easiest way to destroy the Permanent State is to RELOCATE it.  Every large corporation recognizes the value of this strategy.

Look at General Electric.  They could see bad times coming and knew they had to lop off a lot of useless executives pulling down deep salaries.

What did they do?  They relocated from Connecticut to Boston.  Maybe the smartest move GE made in 20 years. Tons of people left GE.

The Federal government needs to be splintered up and relocated to hundreds of cities, towns, and rural areas across America!

And I would further like to see each department be required to relocate every 10 years so people don't get into thinking their Federal job is a permanent one.

This plan will do a number of good things: 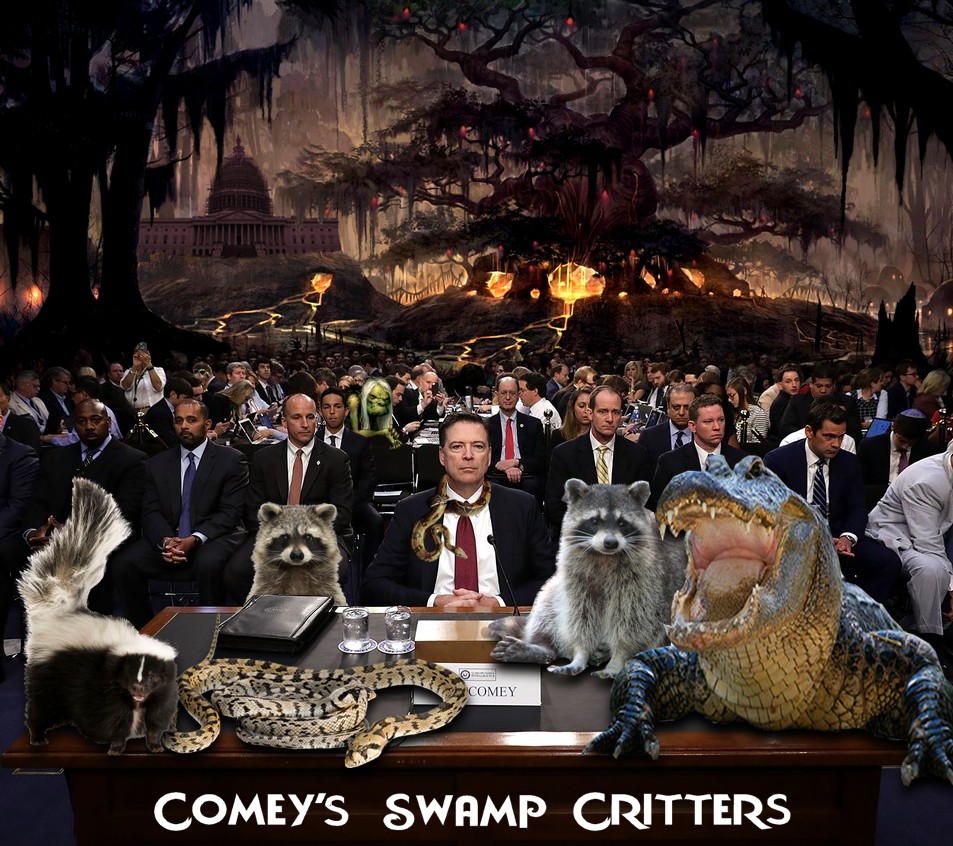 Reagan was saying this 30 years ago.

The biggest obstacle was the permanent government employees, who slow-walked anything.

Not the elected ones.

I proposed to Dingy Harry, two decades ago, that the BLM offices be relocated to Salt lake City. He laughed.

Yes...it’s a great idea...but first I’d like to just move congress critters back to their districts....LOVE THE PICTURE!

The easiest way to drain the swamp would be to prosecute and jail everyone involved in the violation of the Constitution that was the Kenyanesian Usurpation.

The whole thing should be put on a small bird shit covered rock in the Aleutian islands.

It sounds like a fine idea. To get better traction it could be phased in over time. Next year move 1 or 2 small departments. Gather lessons learned. The following year move a few bigger ones. Increase the number over time.

Move the Senate to Nebraska or central Iowa

Leave the White House in DC with DOD, Secret Service and SCOTUS.

NSA has four offices East, Midwest, West and Southwest or East, with offices in the Annex to brief the President.

DHS moves en-mass or is distributed to Eastern Kentucky and/or the former coal Regions of West Virginia.

Move IRS to Idaho and All other agencies to West Texas.

I love all those areas, but they need an influx of people and jobs.

Another scenario I like is the House and Senate meet in DC from January to February, June through July, October through November. The rest of the time their offices are located in the respective Districts and State Capitals. They cannot have a permanent office or dwelling place in DC or they lose their residency in their respective State. Each State determines their representatives salaries and expenses while the Congress is in DC. The Feds will reimburse the States for 50% of the expenses, the States have to bear the rest of the cost. Salaries are based on the States employee structure OR all Senators, Congressman and Supreme Court Justices are paid on a GS schedule starting at GS-15 and buy into the GS retirement and benefits plans. The House and Senate remain in session and all meetings, votes and hearings are done via technology. If congress critters want to hold face to face meetings, just like in the military their respective State Comptrollers have to approve the funds for travel. Each party is allocated identical travel funds annually by their respective States. If the party or a PAC pays for the travel and per diem, it has to be claimed as income by the Congress critter. Personal funds may be used but are not tax deductible. Only the four Congressional Leaders will be allocated Federal Travel Funds and all travel has to be approved by a Comptroller and a travel request submitted with receipts for reimbursement. NO overseas travel is permitted except to a DOD facility and via DOD aircraft. If any visiting, meeting with Heads of States etc take place off the DOD facility it has to be funded by the respective party or a PAC and declared as earned income. Any donated income retained FOR ANY REASON after an election has to be declared as earned income and taxed. To avoid taxes, all donations not spent after an election can be returned to the respective State Comptroller for use by the State and can be claimed as a tax deduction by the candidate.

Not that I ever think about this but tech makes this all very possible but we need a Constitutional Convention to make changes to the Government. We need term limits so badly, but our politicians will never agree to that.

Really. You have incentive patterns down pat. You might have meant this as a tongue in cheek type thing but it could work.

Another benefit - - in a time of war the work the federal government does would be decentralized... harder to take out with one bomb... and easier to recreate if necessary.

I have been saying the same thing for years. Would clear out a bunch of leeches who moved into NOVA.

My memory fails me on the name of the person....I do recall, however, a discussion of moving the EPA folks around the country to have them live where they are making policies about....

It never took place. It really should have been done.

No matter what is done the real solution will never happen. Simply put, there’s just too damn many of them with a combined total of 535 no loads plus bloated coffee fetching staff. Do not remember who but someone once said only around 40 elected officials at any one time in history actually accomplished a damned thing other than pork barrel politics to get returned to DC.

I love how you get State Governments involved. Makes a lot of sense.

Totally agree, postechild. Phasing it in is the best way to go. Somebody like Trump, I think, would like this and could get the ball rolling.

In today’s day of technology, this is absolutely doable. Our national debt would get paid off in a few years with the savings.

There is some of that. The national labs are spread out throughout the country. The coast guard even has a facility in topeka, KS.

Absolutely right. Best thing we could do to really drain the DC swamp.