“Congresswoman Karen Bass, chair of the Congressional Black Caucus, is undergoing vetting as a candidate to be Joe Biden’s running mate,” Bo Erickson of CBS News reported on June 24.

In March, the five-term Los Angeles Democrat endorsed Biden for president, but even some Democrats were troubled by one of Bass’s previous endorsements.

“The passing of the Comandante en Jefe is a great loss to the people of Cuba,” said Bass in a statement after Fidel Castro passed away on November 25, 2016.  “I hope together, our two nations will continue on the new path of support and collaboration with one another, and continue in the new direction of diplomacy.” Democrats had often praised Castro, but Karen Bass used the official designation, Comandante en Jefe, for a Communist dictator one generation out of Europe.

Fidel Castro’s father Ángel Castro y Argiz immigrated from Spain in 1906 and ran a sugarcane farm. Fidel attended Catholic boarding schools and the University of Havana where the law student “organized violent gangs” for “political aims.” The revolution of the late 1950s included not a single Afro-Cuban, and the Communist Fidel was Commandante en Jefe for more than 50 years, with not a single free and fair election.

Fidel Castro drove a formerly prosperous nation to sub-Haiti levels of poverty. His repression was such that thousands of Cubans fled at the first opportunity, leaving everything behind, at great risk to their own lives. That is why the Straits of Florida have become a graveyard without crosses.

In Fidel Castro’s Cuba, Vincent Canby of the New York Times noted in his review of Nestor Almendros’ Improper Conduct, “playwrights, doctors, poets and painters as well as more ordinary folk such as tour guides and hairdressers, a number of whom spent time in one or more of the country’s forced-labor camps.” Castro’s repressions were a matter of record since the 1970s but in 2016 they escaped notice by Karen Bass. The African American Democrat also ignored the island’s legacy of slavery.

According to Harvard professor Henry Louis Gates, of the 10.5 million Africans who survived the Atlantic crossing, only 388,000 came directly to North America. By contrast, Spanish colonizers brought 800,000 slaves to Cuba, where the Africans were forced to toil in sugar plantations.

As R. Denise Hawkins of the National Association of Black Journalists explains, slavery endured in Cuba until 1886, but “Unlike in the United States following slavery’s end, there were no separate schools or Historically Black Colleges and Universities established to educate those who had been enslaved.”

In the 1990s, according to Hawkins, Cuban blacks “tumbled further economically,” after the Soviet Union ended support for its Caribbean colony.  In 2005, 73 percent of Cuban scientists and technicians were white, along with 80 percent of University of Havana professors. “Blacks were unemployed at double the rate of whites,” and “jails held 85 percent darker-skinned Cubans.”

Hawkins fails to mention Afro-Cuban dissidents such as Eusebio Penlaver, harassed and tortured during 28 years in Fidel Castro’s prisons. Also missing are Cuba’s dissident Damas de Blanco, blacks prominent among them, whose goal is freedom for all Cuba’s political prisoners.

The Cuban regime claims that black and mixed-heritage people are about 35 percent of the population. For Julia Cooke, author of The Other Side of Paradise: Life in the New Cuba, the figure could be as high as 72 percent, a strong majority. Castro’s revolutionary movement, Cooke explains, was “dominated by middle-class white men,” and apart from General Juan Almeida Bosque, black Cubans “remained unrepresented in the political leadership.” For those in the know, such as publisher Roberto Zubrano, “racism is alive and well in Cuba.”

In 2008, aging white dictator Fidel Castro shifted power to his brother Raul. In 2018 Raul Castro handed the reins to Miguel Díaz-Canel, another white Communist. Cubans of all skin shades had no say in the matter, and they soon faced deeper deprivations.

In 2019, as CBS News reported, the Cuban Communist regime was “launching widespread rationing of chicken, eggs, rice, beans, soap and other basic products in the face of a grave economic crisis.” As in the Union of Soviet Socialist Republics, countries barren of liberties also come up short on groceries. Such is the reality of socialism, but like Bernie Sanders, Maxine Waters, Sheila Jackson Lee and other Democrats, Karen Bass appears untroubled by enduring poverty, repression and racism in Cuba.

The African American Karen Bass, chair of the Congressional Black Caucus is uncritical of an all-white Communist dictatorship headed for 50 years by Sado-Stalinist Fidel Castro. The choice of Karen Bass as VP for the addled Joe Biden would surely please the Commandante en Jefe his own self.

During a 2009 congressional delegation led by Rep. Barbara Lee, Fidel Castro said in a statement: “An important US political delegation is visiting us right now. Its members belong to the Congressional Black Caucus (CBC) which, in practice, has worked as the most progressive wing within the Democrat Party.”

When idiocy became utter idiocy. Part of me thinks that BidenIdiot and company are purposely trying to lose the election. /s

And the hits just keep on coming.

Who is Chairman of the WHITE caucus? 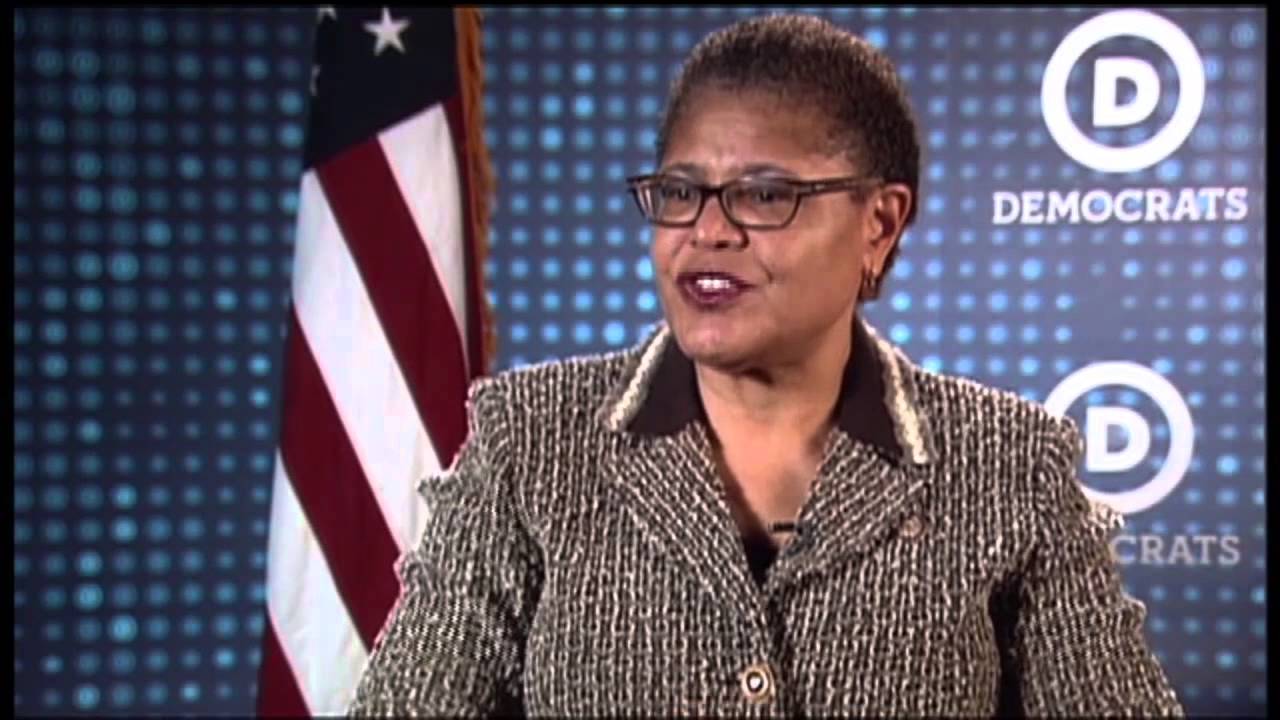 So a communist sympathizer is on the shortlist to be Biden’s running mate?

“So a communist sympathizer is on the shortlist to be Biden’s running mate”?

This is more proof that Biden is being “handled”. He’s a puppet.

Wow. Sobering information on every level that highlights her hypocrisy.

A black Karen What could go wrong?

Can you imagine? He's actually saying to the rest of US, "Here's your next Commander-in-Chief, this hooptdy-ho I found out in Kalifornia. Willie Brown speaks highly of her skills."

So the perfect democrat party member who supports communism.

I would think that if Ms. Bass joins Biden, It would would put Florida solidly in Trumps corner?