Contrary to suggestions by some, most Trump supporters are not automatons or blind supporters. What bothers them, and should bother others, about the latest Ukraine hysterias is the familiar monotony of this latest scripted psychodrama. 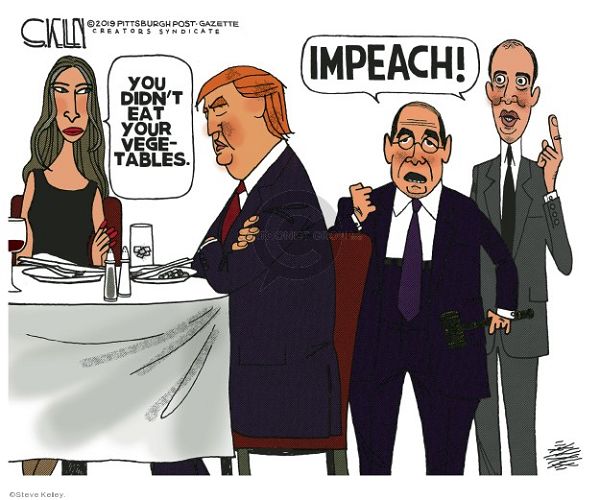 LOL! Wouldn’t surprise me! They tried to impeach him over the ‘Two Scoops of Ice Cream’ incident, Right? ;)

Anything happens to Trump, every leftist on the planet goes to hell, if they are lucky.

The word frenzy is an excellent term to describe the Democrat’s passionate efforts to destroy Donald Trump and undo the 2016 election. They have plotted, attacked with no real evidence or facts and will not be dissuaded from their irrational quest no matter how many times they are rebuffed. They are blinded by hate.

This will not end. Given their bizarre irrationality and hard turn to the left,it is likely that they will lose the next national election. This very well may be too much for the crazies to bear. Suspect there will be overt violence in 2020-21 way beyond the Antifa nonsense. The seeds of a civil war have been sown.
—
The amazing thing is that in October 2016 the left was saying “wait till you see how crazy the Trump supporters get when he loses”.

I would use the words "mass hysteria" instead.

How can one do these things in a commie shithole state like Maryland. Be specific. The last high energy true conservative we had in this shithole state was Dan Bongino, twice, no less, and he is now in Florida. Maryland is so corrupt as to be beyond any sort of redemption.

Donate to the campaign and to any PACs that are targeting ‘get out the vote’ in the KEY STATES (not many of those). That would be my advice. Hell, I live in the People’s Republic of Kalifornia - how do you think I feel?? ;>)

Like the Kavanaugh circus. And the Russian election interference.

Obviously, the political price they pay for this nonsense is too low.

We, the People are sick and tired of the never ending demonrat temper tantrums. This latest has ensured Trump’s second term.

He bragged about it before the CFR. Evidence doesn't get any better than that.

I have no doubt whatsoever that the President is being strengthened by the “Impeachment “ boondoggle.

The do nothing Dems know this, which is why their tone is getting so desperate. Watch the Dem hysteria grow and pass the pop corn.