Jussie Smollett, 36, was criminally charged on Wednesday night in Chicago

He is charged with filing a false police report, a Class 4 felony

Charges carry a maximum sentence of three years and a fine of up to $25,000 FBI is also still investigating hateful letter that Smollett said he received

His lawyers say he intends to 'mount an aggressive defense' against the class 4 felony, that could land him up to three years in prison if convicted.

Police suspect the actor, who is black and openly gay, staged a racist and homophobic assault against himself on January 29, which he claimed was carried out by white men who shouted 'this is MAGA country' as they put a noose around his neck.

As new of the charges against Smollett broke, Empire's producers were weighing whether to remove him from the Fox drama series, on which he portrays the musician Jamal Lyon, sources close to the show told Variety. 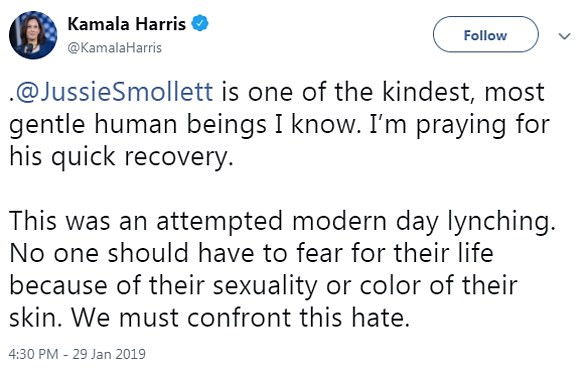 Drama Queen (yes pun intended) looking for a jury nullification. He’d lose his case in any functioning court of law. Octuple or nothing career move.

He’ll fight and he won’t even drop his sammich.
He was a victim of two white Nigerian Trump supporters dammit.

Hmmmm, video of your two friends buying the ski masks, red hats an gloves. You paid them with a CHECK. You lied that they were white.

The check he paid them with will hamper his fight....

fight the man! go jessie! use the race card!

The Uber Morons on ABC going on and on about how this hurts the LGBT community:

Did Kamala delete this yet?

Como on, Kamala et all - LET’S HEAR THE APOLOGIES!

Don’t forget to play the Queen too.

She posted it with her fingers crossed behind her back. “Please, Gaia, let this be true.”

is Harris or FOX “News” paying for the lawyers.

both pushed him to do it.

LOL. Did you see her stammering when asked about the tweet?

What is the old Hollywood maxim?

“There is no such thing as bad publicity.”

Guaranteed he ends up pleading guilty.

Yes. She needs to be confronted AGAIN about this - in fact ALL of the bandwagon commies in the media and in Congress need to be confronted about their blatant anti-Trump bias and apologize to President Trump AND his supporters.

Good, hope the prosecutor withdraws the charges and replaces them with hate crime, attempt at insurrection and conspiracy to deprive rights.