Conor Lamb will win Western Pennsylvania's special election race for Congress on Tuesday if there is a surge in Democratic turnout similar to what has been seen in other special elections over the past year, according to a Monmouth University poll out Monday.

The Monmouth poll's “Democratic surge” model shows Lamb collecting 51 percent of the vote compared with Saccone's 45 percent, while 1 percent of likely voters would opt for a third-party candidate and 3 percent remain undecided. The poll's margin of error is 5.1 percent.

Monmouth said Lamb holds a slim advantage within the margin of error, 49 percent to 47 percent, if the election has a lower turnout similar to what is normally seen in midterm elections. If turnout is higher across the board, similar to a presidential election year, Lamb would defeat Saccone, 51 percent to 44 percent.

Saccone held an advantage over Lamb in all three polling scenarios last month.

TOPICS: Breaking News; News/Current Events; Politics/Elections; US: Pennsylvania
KEYWORDS: 18thdistrict; 2018midterms; 2018polls; bluewave; conorlamb; lamb; monmouth; monmouthpoll; pa18; pa2018; paelection; paping; pennsylvania; poll; polls; ricksaccone; saccone; trump Navigation: use the links below to view more comments.
first 1-20, 21-40, 41-60, 61-80 ... 121-126 next last
And so it begins . . . The least like scenario (turnout similar to a presidential election year) grabs the headline while the next least like scenario (turnout similar to a mid-term) is in second place. What isn't mentioned is the most likely scenario, turnout for a special election, which is predicted at 30% based on absentee requests.

District 18: Show up an vote for the frumpy old guy whose military experience is at least authentic. The photogenic young guy went straight from boot camp to a cherry-picked assignment in OKINAWA where he spent less than two years behind a desk working with legal papers where he was allowed to transfer into the reserves and an appointment to a federal prosecutor's office by you know which administration.

Lamb is running as a populist.

Saccone is running as GOPe scum.

FReepers, 87.248% of the Third Quarter FReep-a-thon goal has been met.  Click above and pencil in your donation now.  Please folks, lets end this FReepathon.  Thank you!
...this is a general all-purpose message, and should not be seen as targeting any individual I am responding to...

I hope the voters turn out for Saccone.

Have we got the voting fraud problem fixed yet?

Monmouth is a liberal poll.

Predicted Hillary would win PA. How did that turn out?

That would explain Trump’s tepid support for him at the rally on Saturday. It was much more like a kickoff for Trump 2020.

I haven’t read the details on either candidate but wonder about choice. Is Saccone GOPe? A Never Trumper? Is Trump down to backing him “because he is Republican” even if in name only?

I hope the voters turnout for Trump this time. Let’s not have a rerun of Alabama. Please.

as i said to a woman in the gym this morning, a woman very active in local GOP politics- the GOPe has done nothing to turn out the base and vote...if we lose once again there is blood on the hands of the GOPe...

Meanwhile, Saccone is an unattractive candidate who apparently comes from the “it’s my turn” camp.

We need attractive, energetic candidates who fight back, points out the lies, calls out the fact that Dem will always vote Dem. Sadly Saccone is not that person.

The only poll that matters is tomorrow

Lets wait and see, sometimes these polls help out side cause it gets our side to vote.

Remember Hillary was suppose to win in landslide, according to a Monmouth University poll...........

Polling organisations are under the control of the Marxists.

Get out and vote for the Trump candidate PA!

Trump is the only honest man left in Washington, the only one we can trust.

His endorsement means everything to me

ask hillary how that headline worked out for her.

Trump’s point about Lamb, made repeatedly at his recent rally, is that no matter how conservative he appears (or even really is), the Demonrats impose srict party loyalty and punish those who do not adhere to it. He will vote the way Pelosi tells him to vote.

not what DJT spent the weekend saying . . .

Monmouth had Clinton over Trump 48 - 44 on election eve. This is a suppress the vote poll. 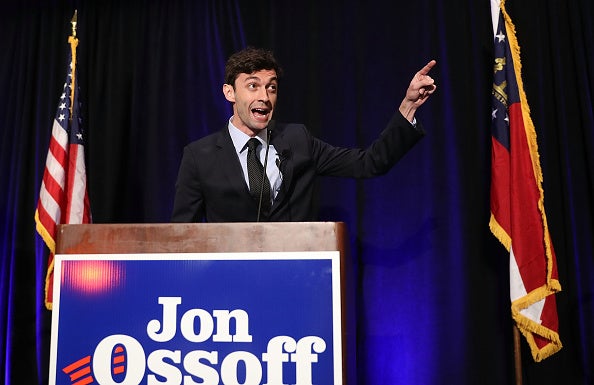