Design is one way transportation agencies are combating gridlock resulting from increased traffic. Other tools in DOT arsenals are the expansion of the highways themselves and variable tolling policies to decrease congestion in high-travel areas.

Earlier this month, Virginia officials broke ground on a $500 million extension of Interstate 395 express lanes along an 8-mile stretch from Alexandria, VA, to the Washington, DC, border. The project is part of a $1.4 billion state program to improve travel between DC and Fredericksburg, VA. Elsewhere in the region, Interstate 270 in Maryland is gearing up for a $230 million overhaul in an effort to ease congestion on the corridor that connects with the Capital Beltway.

Using tolling or other fee-based systems as a strategy to thin rush hour traffic volume has also again become part of the discussion in New York City, as well as other metros where congestion causes lengthy commutes.

Gov. Andrew Cuomo has suggested using congestion pricing to reduce traffic flow through New York City, in this case by charging a premium to drive in and out of Manhattan during peak travel times. He's expected to announce specifics in January as part of his annual State of the State address. Previous plans for congestion pricing in New York City have failed, but Cuomo said the extra money could be used for city infrastructure upgrades, particularly throughout its aging subway system. New York City Mayor Bill de Blasio has said he opposes the idea.

Lee County, FL, has had success with one aspect of congestion pricing, and that is discounts for tolls at slower times as way to reduce traffic during peak periods. In the late 1990s, Lee County began offering 50% toll discounts to drivers who traveled during set periods before and after rush hour. The strategy has reduced traffic during peak travel times by up to 20%, according to the FHA.

If our grandparent’s generation had the insight of these idiots, we’d still be using horse and buggy.

Washington, PA, according to my road atlas.

For the curious, if you’ve never encountered one, there’s a whole website on these things: http://divergingdiamond.com.

Wikipedia has some pretty good illustrations as well.

4 posted on 09/16/2017 1:16:44 PM PDT by Stosh
[ Post Reply | Private Reply | To 1 | View Replies]
To: Tolerance Sucks Rocks
There's one of these in Minneapolis by the airport. It is the most ridiculous thing imaginable. For about a block, you switch over from driving on the right side of the road to the left. I don't see how it saves any time, and it's dangerous as all hell, since you have arbitrarily forced two traffic flows to cross each other in the span of a couple of blocks.

But what do I know? I just have to drive on these streets; I'm not smart enough to design them.

I wonder haw many additional miles I’d be willing to travel to avoid one of those things? So far it’s just a rhetoric question.

Illinois has one.
Works great. 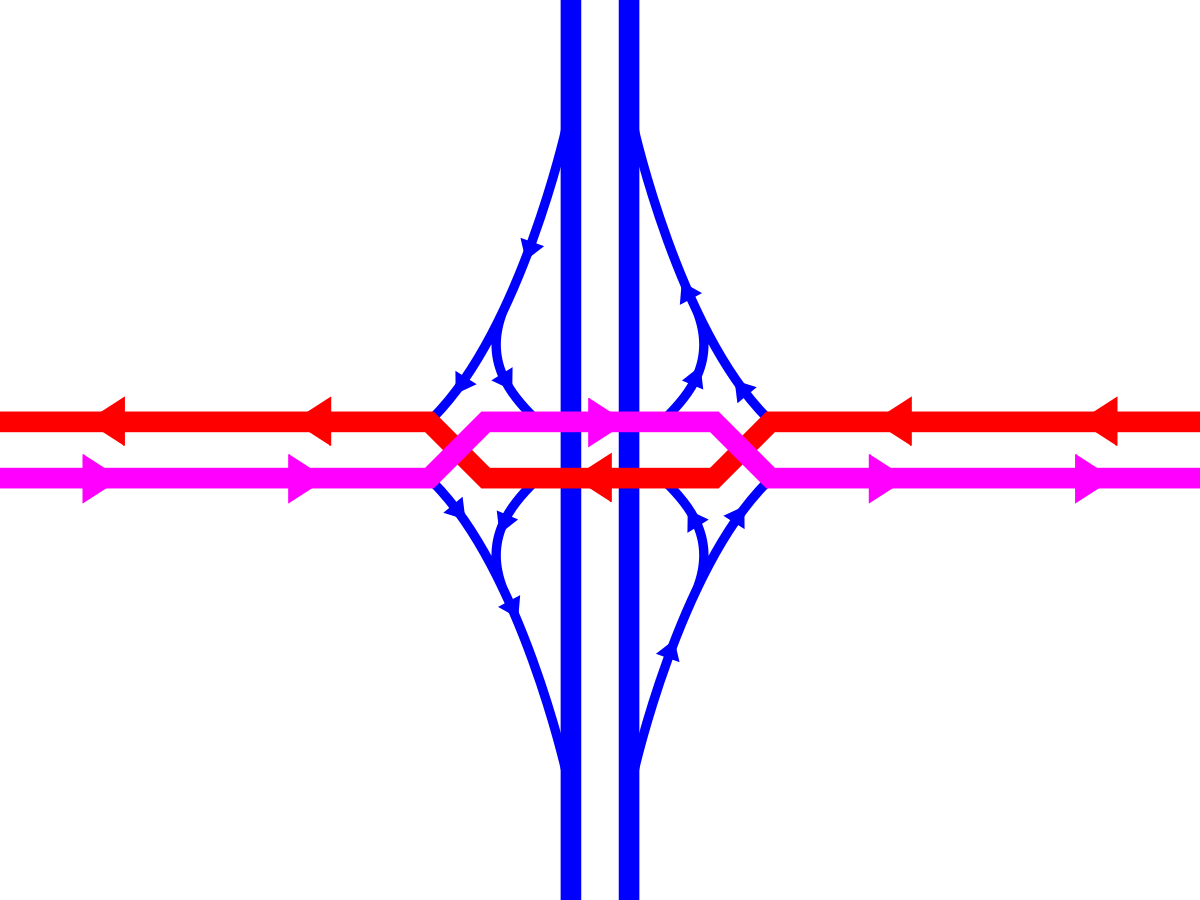 I forget which city it was, but the main road through it had a traffic light over every one of the eight lanes. During rush hour there might be seven lanes of traffic heading east out of town and only one heading west.

Did you ever try to beat the light and make a left turn against seven lanes of traffic? I did. It’s amazing I lived a long as I have. Oh, I beat the light.

You are correct. I know that area well, as I lived near there for 11 years.

We had one of these interchanges installed near where I lived in Georgia. For years traffic in that intersection was a nightmare. After they put in the DD you could zip through in no time flat. It’s a stupid sounding idea that works brilliantly.

A new one close to me in Waukee IA.
It caused a guy to get confused (yes he had been drinking) and get on I 80 the wrong way. He hit a police car head on and killed two cops and a prisoner they were transporting at 2:00 am.

We have one of those at IL-59 and I-88. It’s the most confusing intersection I have ever encountered and my wife agrees.

Ashford-Dunwoody at I-285? It works great, though I still avoid the area on general principals most of the time. I have home field advantage, I can pick and choose routes.

I love all the nay-sayers who’ve probably never transited a DD interchange.

LOL it does take getting used to but for Spfld, MO anything is better for them. All different drivers in that town of 5 universities, retirees, Branson tourists, and country drivers. What a mess. For a small town there were a lot of accidents. Years before I moved there they had never had a traffic study and when they did it made it easier for driving but the locals were still in the habit of going thru the red lights. I learned to look both ways before going on a green light. Boy, do I miss Bass Pro.

I thought it was the first in the US...

And the first is?...
After a few false starts, one that fell prey to fears over the safety of an unproven design, and another that was simply delayed by lack of funding, the first DDI outside of France was opened at I-44 and Hwy 13 on June 21, 2009 in Springfield, Missouri. The project cost just $3.2-million, because they were able to utilize the same bridge from the previous diamond interchange. MoDOT then opened the second DDI about a year later on July 12, 2010 at US-60 and National Avenue, also in Springfield.

I looked carefully at the site and tried to picture myself driving through the intersection with different destinations in mind.

I think I saw the same thing you did.

It removes one hazard by replacing it with another.
The only difference being that the new hazard has a light controlling it.

But I have seen plenty of high volume traditional "cloverleafs" that accomplish the same thing by the use of traffic lights on the ramps.

Having drivers switch sides of the road (to me) is highly counter-intuitive.

18 posted on 09/16/2017 2:20:03 PM PDT by shibumi (Cover it with gas and set it on fire.)
[ Post Reply | Private Reply | To 5 | View Replies]
To: Oshkalaboomboom
I'll trust your observation that it works. It reminds me though of the old slot-car raceways where the slots would criss-cross lanes.

19 posted on 09/16/2017 2:21:31 PM PDT by Flick Lives
[ Post Reply | Private Reply | To 12 | View Replies]
To: Tolerance Sucks Rocks
Interstate 95 where is crosses the Baltimore Beltway north of the city had flip flopping lanes (northbound crosses over southbound and back). No body called it a diverging diamond.