First they spent tens of millions trying to boost their favorite presidential candidates, then they poured cash into ads attacking Donald Trump, and now some of the biggest donors on the right are turning their attention to the delegate fight.

Anti-Trump billionaires are funding ground operations in an increasing number of states to try to ensure the selection of national convention delegates who oppose Trump. The strategy is being executed by the anti-Trump Our Principles PAC, which has a stated goal of blocking the bombastic billionaire from clinching the GOP presidential nomination before the party’s convention in July.

But the PAC’s officials acknowledge that they likely won’t stop there and that they intend to keep up the pressure all the way through the end of July’s Republican National Convention, possibly including trying to steer the nomination to an alternative candidate.

While engaging in presidential delegate fights is an unprecedented use of super PAC cash, one of Our Principles’ billionaire donors said it’s a smart way to “cover all bases.” And the donor, Minnesota media mogul Stan Hubbard, brushed aside Trump’s increasingly vocal frustration about getting cheated in the battle for delegates.

“There’s nothing unfair about it. He or she who can marshal the most forces and do the best job, will get the nomination,” said Hubbard, who in February donated $10,000 to Our Principles and said he’d consider giving more to the stop-Trump effort.

TOPICS: Crime/Corruption; Front Page News; News/Current Events; Political Humor/Cartoons; US: New York; US: Ohio; US: Texas
KEYWORDS: 2016election; alltherightenemies; antitrump; billionaires; cruz; election2016; gop; kennthpvogel; minnesota; newyork; ourprinciples; ourprinciplespac; politico; stanhubbard; superpac; theft; trump Navigation: use the links below to view more comments.
first 1-20, 21-40 next last
"He or she who can marshal the most forces and do the best job, will get the nomination,” said Hubbard

Thank you, Mr. Hubbard, for clarifying that it is an illusion that the votes of the people have any real meaning or authority anymore.

The Powers the Be let us all believe the Lie that our votes mattered - but now we know they don't.

This is what they really think of all of you, and us.

The GOPe and the corrupt media keep telling us that we don't understand "The Process." They sound like a bunch of Amway or Total Quality Management charlatans, which is all they really are.

This very creepy and strange creature is complicit in the theft and corruption that is now going on, as he is drunk with ambition and the illusion of power. But he, and all of you who support him, are just dupes for the lever pullers who have enriched themselves at your expense. They would rather destroy the nation and the Republican party than give up their gravy train.

I am just about done with all of this. I will not be a hostage to the whore house that the Republican establishment is running. I'll vote for Trump in the primary, and my vote will mean nothing.

Trump described himself as an Ayn Rand fan. He said of her novel The Fountainhead, “It relates to business (and) beauty (and) life and inner emotions. That book relates to ... everything.” He identified with Howard Roark, the novel’s idealistic protagonist who designs skyscrapers and rages against the establishment.

When I pointed out that The Fountainhead is in a way about the tyranny of groupthink, Trump sat up and said, “That’s what is happening here.” He then recounted a call he received from a liberal journalist: “How does it feel to have done what you have done? I said what have I done. He said nobody ever in the history of this country has done what you have done. And I said, well, if I lose, then no big deal. And he said no, no, if you lose, it doesn’t matter because this will be talked about forever.

“And I said it will be talked about more if I win.”

‘Our Principles PAC’ is run by Romney and Bush people. Its everywhere. Its the one that gave money to Eric Erickson and other talkshow hosts.

Hubbard’s argument is similar to the Politburo’s argument for why the government of the old Soviet Union was legitimate. In other words, if the peons understood the process, their votes might matter, unless the party marshals the most forces - in which case their votes don’t matter.

Power does what it wants. This is likely the last chance to break the Oligarchs’ hold on our government, and it will fail. Serfdom, followed by bloody revoultion in a generation or two, is the next phase.

How’s it feel to be the tool of the establishment and billionaire class. The ones who want to keep the status quo?

BETTER TO LOSE WITH CRUZ.

For all the good that spending all this money has accomplished, I’m guessing that some of these billionaires will be only millionaires or better yet, thousandaires.

Let them all go on food stamps and Medicaid. 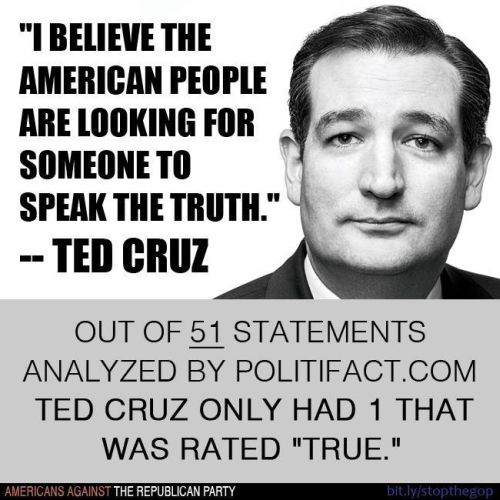 Wikipedia indicates he is probably Mormon following his orders from Romney-Reid.
He owns an ex-LDS radio station in Salt Lake.

-Illegal aliens and their employers must be given amnesty.

I don’t agree with you....I think the money which is funding the constant anti trump chants is having a serious effect on the election. First of all, it is not allowing Donald to get to the number he needs on the first ballot. Even where they have to go back and rewrite rules they do what they do to erode his numbers.

Second, they don’t want the lil weasel either so their intent is not to support him except to ensure he gets enough votes to be a consistent second but at some distance, enough they can run through one of their candidates after the first votes: pick one from Ryan, Romney, Yeb, Gaysick, et al. Their hope there is to pick up enough of those who leave Trump, some will but he will have a third who will stay put. It becomes easier at this point too because Trump will either quit or go third party. His delegates will never go to Cruz. Cruz at best could end up as a VP but rest assured, he has no more chance to be nominated by these scum than does trump. The final ticket something between Yeb, Romney, Ryan and Gaysick...probably Yeb and Gaysick.

They are pushing center-right Trump supporters to unite with the Bernie people. They are gonna rue the day.

I wonder what the cartoonist's FR nick is?

HUH? I am anything but a Cruz supporter...although I was until I learned more about him. He really is a liar...and a great deceiver - without conscience apparently due to desperate ambition.

“The final ticket something between Yeb, Romney, Ryan and Gaysick”

I agree. It’s said that once you kill the first time, the second time is easier. After they get rid of Trump, why not kill again and put someone who can win Florida, Virginia, etc.

If only there was a billionaire funding a pro-Trump delegate push.

But Trump is too lazy and/or cheap to try to win.

“But Trump is too lazy and/or cheap to try to win.”

ed Costa, a longtime GOP activist who pushed the 2003 recall that ultimately led to Arnold Schwarzenegger’s election, is in charge of finding pro-Trump delegates. “We’re way, way, way over halfway,” Costa said, though he acknowledged the particular challenge in inner-city Los Angeles districts dominated by Democrats.

18 posted on 04/12/2016 7:56:15 AM PDT by MaxistheBest
[ Post Reply | Private Reply | To 17 | View Replies]
To: SkyPilot
How is the American doing now? Realize that the entire system has been ripping us off. Now we see the entire establishment trying to stop Trump. Why? Easy if one stops to think they want to save their gravy train and to hall with the millions of Americans that are losing everything. The system is to turn us into a third world Country and the special will take it all. And Cruz is one of them.

Sure, now he’s trying to do what he should have done all along. He only hires the best, but nobody told him about delegates until 2 weeks ago.

If he loses because of a couple delegates he lost while he was being negligent, it will be only his fault.