Riding a wave of momentum from his trio of victories on Tuesday Rick Santorum has opened up a wide lead in PPP's newest national poll. He's at 38% to 23% for Mitt Romney, 17% for Newt Gingrich, and 13% for Ron Paul.

Part of the reason for Santorum's surge is his own high level of popularity. 64% of voters see him favorably to only 22% with a negative one. But the other, and maybe more important, reason is that Republicans are significantly souring on both Romney and Gingrich. Romney's favorability is barely above water at 44/43, representing a 23 point net decline from our December national poll when he was +24 (55/31). Gingrich has fallen even further. A 44% plurality of GOP voters now hold a negative opinion of him to only 42% with a positive one. That's a 34 point drop from 2 months ago when he was at +32 (60/28).

Agree, Ryge. Michigan is key. I hope Santorum is working his fanny off in that state.

Several threads and several non FR articles have made it clear over the past week that the best path to defeat Romney is for both Newt and Rick to stay in.

“I’d rather see the end of the GOP as a viable party and rebuild from ashes.”

The ‘end’ of the GOP will only result in a dem takeover. With that, they’ll expand Obamacare, pass amnesty and appoint young liberals to replace Thomas and Scalia (both are about to retire).

So yeah, good luck with that strategy. Once they have their permanent majority they will never go away, and the ‘new’ GOP that will rise from the ashes will probably just be a left of center version of the current one.

I don’t think Newt should drop out. This poll indicates what I’ve thought all along, if the candidate is strong enough to win they can do it no matter who else is in the race. And I believe in having a plan b if something goes wrong.

The best test of ‘weak’ will be the next debate. If Newt can pulverize him the Santorum wouldn’t stand a chance against Obama.

And I think Newt should give it his best shot. Better to know now than later.

Give me a break! That Specter thing is old news. It was a bad decision but we got Justices Roberts and Alito in the process. Come on.

IF we go this route, I would want Newt on top so that we could have 16 years of Republican President years. Newt being VP would just make us go through this “crap” again in 8 years which as you can see is PAINFUL. lol. I am not mad at Cheney for not running but it really would have been better had he run or at least step aside at some point to get a “ready to go President” for 2008.

69 posted on 02/11/2012 7:19:54 AM PST by napscoordinator (A moral principled Christian with character is the frontrunner! Congrats Santorum!)
[ Post Reply | Private Reply | To 10 | View Replies]
To: TexasFreeper2009
When Newt was way ahead I urged Santorum to drop out... now I must do that same to Newt.

How about Newt stays in and pushes Romney into 3rd place? he's only 6 pts back.

I don't think 1-on-1 is the best way to face Romney - if Santorum had dropped out, Romney would have destroyed Newt with negative ads and cruised to the nomination. 1-on-1 vs Santorum he could still do the same.

When you've got a Romney down, don't take your boot off his throat!

Santorum is a clone of W, no thanks. One big spending compassionate conservative was more then enough for me.

But Santorum doesn’t have the style to carry it through to victory in November.

Style, schmyle. Obama was pretty stylin’. We need a constitutional conservative, not a prancing dandy.

“And unlike Newt, he’s an establishment candidate who endorsed Specter”

And Newt passionately endorsed Scozzafava in NY-23 and lambasted conservatives for supporting the more conservative candidate.

74 posted on 02/11/2012 7:20:46 AM PST by wk4bush2004 (RICK SANTORUM 2012!)
[ Post Reply | Private Reply | To 49 | View Replies]
To: C. Edmund Wright
Actually, Rick’s 06 campaign was full of his own evil. He swerved WAY LEFT to try and make folks think that Rickie could “be a good little moderate and liberal too.”
I noticed Newt and also Chuck Norris are starting to hit that theme softly this week. Might be too late, but they have finally woken up.

The only way to get Rick out of the race now is to get Donald Trump to endorse him. That's the kiss of death. ;)

How is he a loser? Is the number of states he won not enough for you?

This is good news. I hope this becomes the unstoppable momentum we have always needed.

77 posted on 02/11/2012 7:22:20 AM PST by GulfBreeze
[ Post Reply | Private Reply | To 1 | View Replies]
To: PapaNew
But they cannot be sustained without MAJOR CUTS IN GOVERNMENT starting with CUTTING ENORMOUS WASTE, USELESS CABINET DEPARTMENTS

It was so easy to demonize Newt,because there was so much there that was demonic.Did we forget DEDE?Fannie and Freedie?Millions made from selling his influence to the highest bidder?His own party refusing to let him continue as speaker of the house?Resigning leaving his state in the lurch?His good times with Hillary and Pelosi?Cheating on his wife?Oh,and he just lost his biggest money backer?
NO NEWT NO!!! 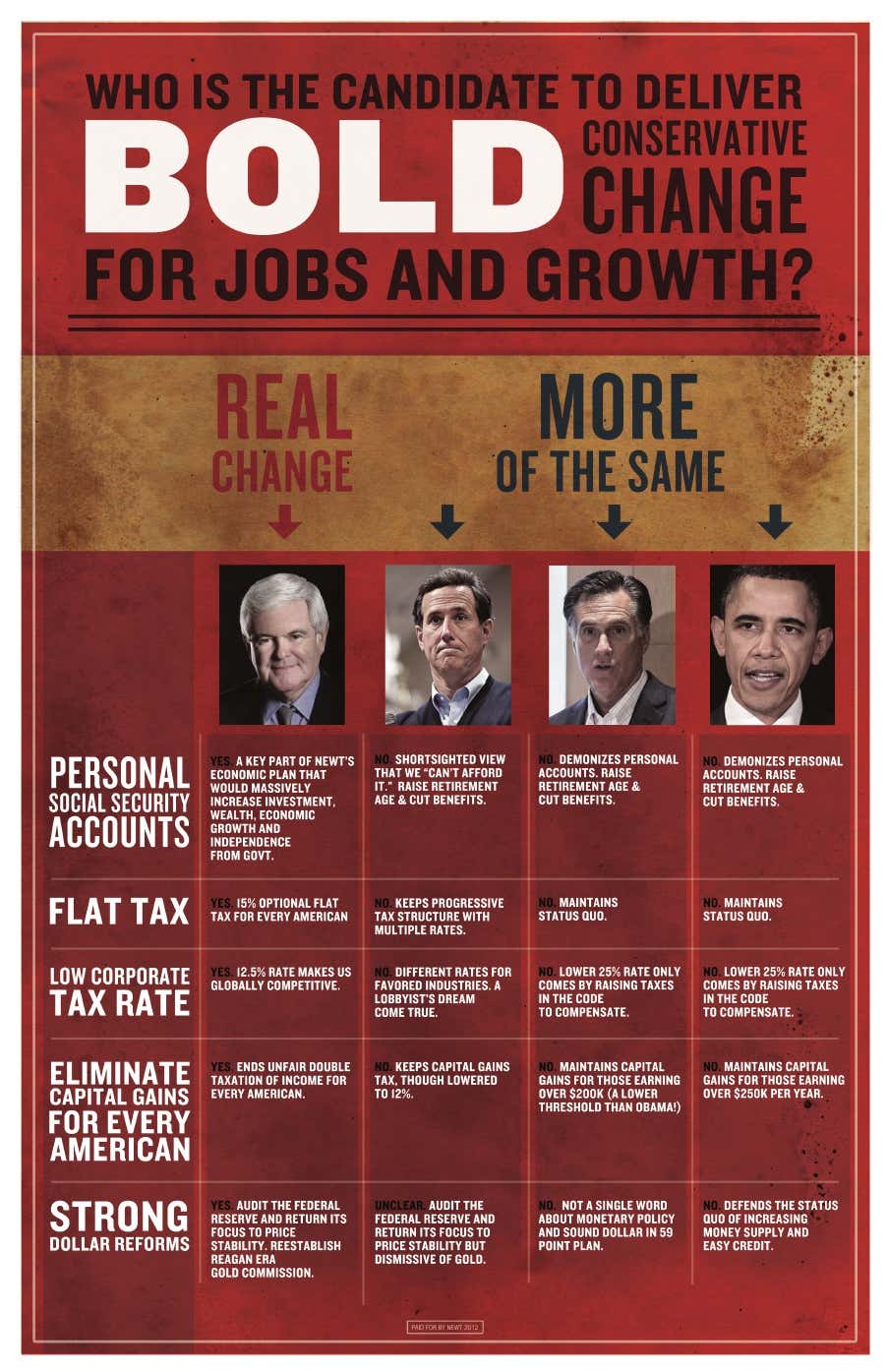