Nidal Malik Hasan, the suspect in yesterday's Fort Hood shootings that killed 13 and wounded 30, identifies as a Muslim.

Much has and will be made of his religion from people too ignorant to read a Qur'an, or too isolated to talk to a Muslim, or too stubborn to educate themselves. Even the Washington Post calls him a "devout Muslim." But can a "devout Muslim" commit such acts? No more than a "devout Christian" can, no.

Hey Susan 13 people are dead because of the influence Islam had on this “pig in hero's clothing”. You can pretend that his religion had nothing to do with it all you want. You can also pretend the moon is made of cheese and your having a moon cheese sandwich for lunch for all I F’ng care. It's a shame our brave heroes risk their lives to protect your right be an ignorant A-hole. Go face Mecca...traitor!! 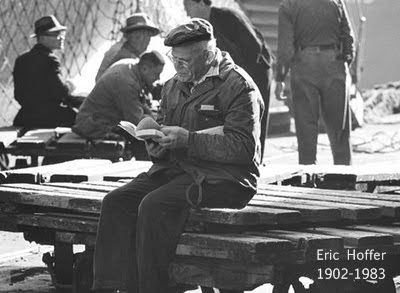 "If our difficulties can be ascribed to something that has happened in the past, they cannot serve as evidence of our present inadequacy and cannot blemish our self-confidence and self-esteem." - Eric Hoffer, "The Passionate State of Mind," (1955)

And this is worse than not having a clue, this sells cluelessness as an acceptable narrative. Of course, had these killings taken place at the neighborhood Olive Garden, people would claim to have a clue, would they not?

They might ask, yet again, what motivated millions of Germans to join the Nazi comic opera, seventy years ago, and why their officers were offended when, after all was said and done, it was explained to them that "just following orders" was hardly an excuse and made a poor defense.

The Fort Hood "shooter" fits a profile, and along more than one track, of those who join Mass Movements. See a definitive work on the subject, "The True Believer," by Eric Hoffer (1951).

The "readiness for self-sacrifice" is a the big clue. The perception of a "permanently ruined self," incapable of socialization and, perhaps more importantly, lacking the capacity or opportunity for achieving a sense of "unquestioned usefulness," the shooter sought self-annihilation and a promised escape from the burden of responsibility that comes with freedom, by submission to a collective, where choice becomes the prerogative of the collective, especially a collective touched with timeless destiny.

Add to Hoffer the singularly Judeo-Christian view that there is no escape from the responsibility that comes from "knowing good and evil," and the panic that sent Adam and Eve running for the tall grass, suddenly aware of their "nakedness," becomes a picture of the Human Condition, for many.

A pet cat will tease a captured and stunned mouse until the prey is exhausted or dead, literally torturing the animal to death, and no one suggests the cat is doing anything other than its "natural born thing."

But if little Johnny does the same thing we might seek professional help for him.

There's no mystery here. The shooter made a deliberate decision, and coldly, based on the perception of having merged an unwanted self with a collective that cannot die, and cannot be questioned.

It's amazing how so recent a history as that of World War II can be lost on so many, so quickly.

But, for a brief time, in the middle 1960's, Hoffer and his definitive work "The True Believer" was required reading in American High Schools and the Longshoreman philosopher was the subject of a CBS prime time television special where he was interviewed for ninety minutes by Walter Cronkite. He even was awarded the American Freedom Medal in 1982.

She’s got a comments section on her article and she’s actually responding back to the comments, if anyone wants to let her HAVE IT!

83 posted on 11/06/2009 9:21:37 AM PST by RogerWilko
[ Post Reply | Private Reply | To 1 | View Replies]
To: 2ndDivisionVet
Much has and will be made of his religion from people too ignorant to read a Qur'an, or too isolated to talk to a Muslim, or too stubborn to educate themselves

What an ignorant woman. My fondest wish would be for this cretin to be plucked from her sheltered life in America and deposited smack dab in the middle of an Islamic country with no hope of return. Leave her there for one year and then ask her about the religion of peace. Imbecilic libs.

86 posted on 11/06/2009 9:22:58 AM PST by Sir Gawain
[ Post Reply | Private Reply | To 1 | View Replies]
To: 2ndDivisionVet
I have had it! I am sick of first the BUSH administration and now the Obama administration along with the FBI, CIA and all of the State run media making excuses and telling us "this has nothing to do with Islam, Muslims or Islamic terrorism. Folks, this has EVERYTHING TO DO WITH ISLAM AND MUSLUMS. This man along with countless others they have all swept under the rug killed BECAUSE HE IS A MUSLIM, BECAUSE OF HIS perverted, Satanic Islamic "religion".

Americans had better wake up fast or our country is going to eventually fall to Islam and end up just like England and France. They are at WAR with us! Everyone of us who do not believe in their false so-called "prophet" Mohammed, or their false "god" Allah is nothing but an INFIDEL. According to the Koran, according to Mohammed, according to the teachings of Islam "infidels" ONLY HAVE THREE CHOICES:

1) Convert to Islam by choice or by force.

2) Become a dhimmi slave under Islam; subject to Islamic masters and subject to Shariah law.

If you staunchly refuse to accept either "choice" number one or choice number 2 you are left with ONLY ONE OTHER "CHOICE":

3) You can DIE for your faith or for your lack of faith. DEATH is the only other "choice" given to "infidels" who refuse to convert or become slaves of Islam!

Unless and until the Obama administration along with the FBI, CIA and all of the State run media begin to tell the truth and FIGHT TO WIN, we are going to eventually lose our county and we or our children or our children's children are going to be forced to face and "chose" one of the three choices above.

ISLAM IS NOT "the religion of peace", it is the religion of death, destruction, subjugation, violent conquest, murder, fanaticism, and Satanic wickedness... This is what Islam is at it's core.

87 posted on 11/06/2009 9:24:46 AM PST by Jmouse007 (God and Father of our Lord Jesus Christ, deliver us from evil, in Jesus name, amen.)
[ Post Reply | Private Reply | To 1 | View Replies]
To: 2ndDivisionVet
Devout Muslims are waging a war of terror against innocent people all over the world. Blowing up their own children , mothers, grand mothers and everyone else’ too.

These defenders (Susan Cambels) of indefensible acts and those who commit them are worse than the offenders themselves.

This murderer is yet another sleeper who has been activated.

I’d be willing to believe this wasn’t due to the shooter’s Muslim beliefs if it was an isolated event.

I just can’t fool myself any longer.***

And one could add THE ZEBRA KILLINGS in San Francisco by black muslims years ago along with the murders by the same over the movie about Mohammed years ago.

How many More that were covered up?

RE: “She is from Connecticut.”

Hey, you’re overstepping the boundary now. I’m from Connecticut - it’s a great place to be FROM. (It’s OK to visit, too.)

Where is Sgt Akbar? His team of lawyers and media types are yet excusing his murderous attack on his own fellow soldiers in Kuwait. His death sentence handed out in 2005 is still being appealed. He along with this murderer will probably die of natural death long before the horrendous appeal process is finished.

NOW he is identified as a traitor and a murderer of men, women and children.

Maybe you don’t understand that they are completely modern, in fact they use the tools of modernism to attack modernism itself, and modernism was founded on religious traditions and the notion of utopia. People still get murdered we are not living in utopia many people are silenced and killed for all governments and various religions ,even to this day some people are still “crucified” literally! Our governemnt tortures people, doesn’t that sound like 12th century crap? Nobody has any claim to being “modern” and the right to claim “exceptionalism” to the rest of the planet, though that doesn’t mean we maybe the most barbaric, but we are barely out of the jungle and in no position to claim superiority to anyone, though I think we are far more tolerant than others, we are still not a “utopia” and usually thinking or hoping for one leads to millions being slaughtered.

Idiots....devout Christians don’t kill innocent people.....what a TWIT!! Only ONE “religion” does that and offers proudly 72 VIRGINS in HEAVEN when they kill infidels!! The “ROP” has EVERYTHING to do with it!!

Like many people here I have, in fact, read the koran. I did so while living in a middle eastern country.

It struck me then, that it was a series of sermons delivered in war-time, and as a result, its overall tone was extremely militarist. Many of the sermons seem to have been delivered precisely on the eve of battle.

By making it their central scripture, they have created a religion that bears superficial resemblance to the “abrahamic” religions but the deeper you go and the more devout you are the more accepting you are of violence and contempt toward non-believers. Indeed, the more violent and contemptuous you are of anyone who steps out of line.

She is trying to find an equivalence between Islam and the other religions, for what purpose? To excuse, evidently, what this man and a long line of other men just like him have done. And to disarm us and make any response impossible.

Are we going to attack indiscriminately all muslims in response to this? When have we ever? This is something that muslim jihadists do. We have never done this. We quite clearly see that not all muslims are jihadists; we have allied ourselves with muslims throughout the theater and are building muslim armies to go after them. We are the ones who see the distinction, and as such we don’t have to make excuses for jihadists. No, all muslims aren’t jihadists; but the jihadists are muslim and very devoutly so. The fact that she doesn’t want to see it speaks more about her than it does about anything she writes about.

No offense, but when a Palestinian-American man, a Muslim born and raised and practicing, allegedly walks up to his workplace, yells “Allah akbar!” and starts spraying bullets at people, it’s not bigoted but perfectly reasonable to assume that his religion at least might have been precisely the point.

What did their idiotor in chief say about the abortionist shooting in a church this year?

Barack Obama lied by omission when he commented publicly that even Thomas Jefferson had a koran. He refused to say just WHY he had a copy of the text.

Same reason that conservatives have taken to reading Saul Alinsky’s Rules For Radicals, to read the enemy’s playbook.

The skank can’t win the argument so she’s not allowing all comments to go through. Typical lefty.