Workers renovating a plaza in the Argentine capital, Buenos Aires, have stumbled across a forgotten cemetery. It was used by early immigrants in the first half of the 19th Century. 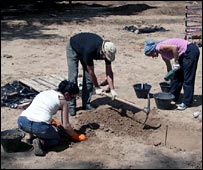 The bodies have rested under what today is a neighbourhood plaza

It was called the dissident cemetery since it was used by the Protestant and Jewish communities who were not allowed to bury their dead in the Roman Catholic cemeteries used by the majority of the population.

The find has excited experts keen to learn more about their country's early days.

The dead had lain undisturbed under this plaza in the heart of Buenos Aires for more than 100 years when builders laying drainage pipes exposed them to the light.

Here lay the bones of men, woman and children surrounded by the remains from their simple funerals: pieces of rotten wood from coffins, metal coffin handles, nails and broken bottles.

Archaeologists are carrying out a full investigation into what they might find. Leading the search is archaeologist Marcelo Wiesel, who says a rich history lies under Buenos Aires.

"We hope this will help to tell us how Buenos Aires transformed itself so fast," he says.

Perhaps the greatest discovery so far is a gravestone found two metres underground, marking the spot where a 10-month old German girl was buried in 1886.

City restorer, Josefina Crepy, says it was in almost perfect condition - there were a couple of dents, probably caused by the builders who found it.

The work she and her colleagues are doing will provide one piece of an emerging story.

Argentina saw huge waves of immigration in the early part of the 19th Century, hoping to take advantage of the lush pastures in the interior of the country and the opportunities in Buenos Aires, which at the time was one of the fastest growing cities in the world.

Most came from Italy and Spain. But large numbers also arrived from across Europe - Germans, British, Hungarians, French and Scandinavians. 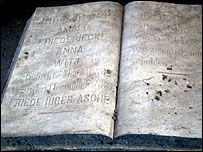 An unearthed gravestone from 1886 written in German

Most of these north European immigrants were Protestant and Jewish, and found there was no place for them to bury their dead in the Roman Catholic cemeteries inside the city.

So they established burial grounds outside city limits which became known as dissident cemeteries.

The second of these was in the area of Buenos Aires now called Once... still a place which draws immigrants, now mostly from East Asia. It was called the Victoria Cemetery and soon became crowded.

The only alternative was to throw corpses in the river.

As these non-Catholic immigrants established themselves they recognised the need to find a more permanent, fitting place to bury their dead.

They found that in a corner of Chacarita, one of the biggest cemeteries in Buenos Aires which today boasts a very well tended German and alongside it, an equally beautiful British burial ground.

A huge operation was put in place to move the remains from the Victoria dissidents' cemetery to their new resting place.

But contact with some families had been lost and others simply did not want to finance the move. Those bodies have rested in peace under what today is a neighbourhood plaza. The question arises of what to do with them.

The head of the city council's culture department, Silvia Fajre, says that according to the evidence they have so far, many hundreds of bodies remained in the dissidents' cemetery and many months of archaeological work will be necessary before they know exactly what they have got.

"This is a hugely important find," she says.

"We understand that cemeteries and rituals surrounding death tell us a great deal about how each community lived... also what they ate, their illnesses, the ceremonies they practised." 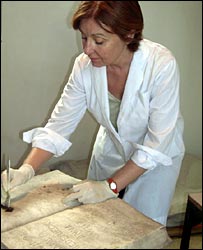 The local residents have, for the time being, lost their green space.

The city authorities say they are keen to include them in the work, talking to schools and probably, when the operation is completed, establishing some kind of memorial to those who died in the early days of the new Argentina.

One of those watching with interest is the Reverend David George of the Anglican cathedral in Buenos Aires. That community has just celebrated 175 years in Argentina.

Rev George holds the births, marriages and death records from those early days in a vault at the cathedral. They show that those early pioneers came from all walks of life: Accountants, coopers, blacksmiths, fishermen, bar-keepers and saddlers.

And they died for a range of reasons: "Fell off horse, died in fight, bad liver, found dead for no apparent reason, drowned."

Thousands were killed by the yellow fever epidemic of 1871. Most never reached the age of 40 and what the records tell us without doubt is that building the new Argentina was not easy.

In the rush to build a new nation, a lot of information was lost and little was recorded about how ordinary people struggled, lived, loved and died.

But it was not lost forever, and nearly 200 years later the dissident dead are beginning to tell their stories to a new generation of Argentines.

To: Yehuda; Alouette
Somehow I knew that your post above just wasn't right. There are eleven active cemeteries in Gran Buenos Aires the capital. You can read about them here (in Spanish). Five are Ashkenazi and six a sephardic. Unfortunately I cannot find an article in english denoting the same. A brief synopsis of jews in Argentina aludes to the BA cemeteries.

To: Yehuda
It does help if you know Spanish