This is the time that Americans from coast to coast cease their workaday activities and gather with friends and loved ones for Thanksgiving. It is a time-honored ritual, observed by the overwhelming majority of the American population. What are the origins of this celebration, and what meaning should it have for Americans today?

Thanksgiving is a combination of two longstanding traditions in Anglo-American civilization—the joyous harvest festival and the more somber declaration of a day of prayer or thanksgiving in the midst of some national crisis.

The origin of the present American Thanksgiving, spiritually and emotionally, harkens back to the 1621 observation of a thanksgiving and harvest celebration by the Plymouth settlers in Massachusetts. These English pilgrims left Plymouth on Sept. 6, 1620, for the New World. After a little more than two months at sea, they landed in what is now Massachusetts. After signing the Mayflower Compact, the first document to introduce self-government to the New World, they disembarked to face the harsh New England winter.

Unprepared for the brutal and unforgiving environment they faced, half the settlers died before winter’s end. However, with the help of Native Americans, they planted crops and reaped a sufficient harvest to carry them through the second winter in the New World. It was now clear they would not starve. So these 17th century Christian Pilgrims held a feast of thanksgiving to God for His beneficence and favor. The three-day celebration commenced on Dec. 13, 1621, and included many of their Native American neighbors who had been so hospitable and helpful to them in their quest to survive.

“Our harvest being collected our governor sent four men fowling together so we might rejoice together in a more special way after we had gathered the fruit of our labors. In just one day the hunters killed as much fowl as … fowl fed the company almost a week… Many of the Indians joined us including Massasoit, the greatest king, and some ninety of his men. We all entertained and feasted together for three days. The Indians went out and killed five deer which they brought to the plantation … And although it is not always as plentiful as it was at that time, yet by the goodness of God we are so far from want…”

In 1777, in the midst of the American Revolution, the first official national Thanksgiving celebration was declared by the new nation that had declared its independence from Britain the year before. In October 1789, the head of the recently founded new federal government, George Washington, issued the first Presidential Thanksgiving Proclamation as a day of thanks to “that great and glorious Being, who is the beneficent Author of all the good that was, that is, or that will be—that we may then all unite in rendering unto him our sincere and humble thanks.…”

President Washington went on to declare that both houses of Congress asked him to recommend to the people of the United States a “day of public thanksgiving and prayer to be observed by acknowledging with grateful hearts the many signal favors of Almighty God especially by affording them an opportunity peaceably to establish a form of government for their safety and happiness.”

President Abraham Lincoln was the second president closely identified with Thanksgiving. There had been repeated calls for a national Thanksgiving Day observance in the 30 years before the Civil War, and in 1863, President Lincoln declared a national day of Thanksgiving. President Lincoln made his declaration in the darkest days of the Civil War in the immediate aftermath of the Battle of Gettysburg, July 1-3, 1863, and just days after visiting the haunting, still battle-scarred battlefield at Gettysburg where he had delivered the timeless Gettysburg Address on the site where 50,000 Americans had perished in three days.

In 1941, as the war clouds of World War II gathered ominously over the land, Congress permanently established Thanksgiving on the fourth Thursday of each November as a national holiday. Thanksgiving has been part of our national story from our Puritan forefathers onward. Clearly, even in the darkest days during the Revolution, the Civil War and two long World Wars, Americans have felt the need to pause and thank their God for His blessings and to invoke His protection and watch care over our nation.

As we look around us, most Americans, at least those who are religious, understand that God has blessed our nation in incomparable and manifest ways. And blessings, it must be remembered, are blessings because they are undeserved and unearned. When one looks at American history, one cannot help but come to the conclusion that more than fortuitous circumstances had been at work. No one can be that lucky. God has blessed us and protected us in unique ways. And Americans of religious faith should take the occasion to give thanks to God for His blessings and His bounty.

As a Christian, I encourage all fellow Christians to undertake a spiritual exercise this Thanksgiving. The Apostle Paul commanded us as Christians “in everything gives thanks, for this is the will of God in Christ Jesus concerning you” (1 Thess. 5:18).

Obeying this commandment will allow the Holy Spirit to create in you a heart full of gratitude for God’s manifold blessings in your life. I promise you that when you start giving thanks to God for the blessings in your life, God will keep calling new blessings to mind, and you will find that there as so many more things to be thankful for than you had thought of or imagined. God will create in you an ever more thankful heart, and every day will become its own Thanksgiving.

Thanksgiving has always been my favorite holiday. To me it is the most American of holidays. I hope that we will all stop to remember the origins of Thanksgiving as we gather around family and friends for Thanksgiving this year. We have so much for which to be grateful in this land that God has blessed so richly. This Thanksgiving I pray that His peace will be with all of you.

We can all be Thankful on this day for many things. One which is one of the most important parts of our constitution which is Freedom OF religion.

We can thank the “mother” country, as the founders referred to it, AND the Puritans for that. The sad fact is this, the Puritans became one of the most abusive sect in the history of this nation. They laid a very sordid history after they became established here.

Ann Hutchinson referred to them as the “The Church of Boston” in her writings. They hanged many whom would preach other doctrines within their area of control.

2 posted on 11/28/2019 7:59:09 AM PST by crz
[ Post Reply | Private Reply | To 1 | View Replies]
To: SeekAndFind
In 1941, as the war clouds of World War II gathered ominously over the land, Congress permanently established Thanksgiving on the fourth Thursday of each November as a national holiday.

In 1939, President Roosevelt changed the date of Thanksgiving from November 30 to November 23, supposedly to stimulate Christmas shopping by increasing the number of shopping days between Thanksgiving and Christmas. However, the president's action generated chaos as businesses, schools, etc. had already planned on Thanksgiving falling on the traditional date, and some states continued to observe it on the 30th.

The confusion resulted in singer Ginny Simms proclaiming 1939 to be the year of "one Orson Welles, two Thanksgivings and Three Little Fishies." The movie "Holiday Inn" (1942) also featured a scene showing a turkey who was confused about the date of Thanksgiving.

How funny. As much as some decry consumerism, etc. nowadays, it’s interesting to see how FDR wanted to lengthen the Christmas shopping season, and hopefully stimulate more sales.

“Thanksgiving” is a harvest festival, and has its roots going back to perhaps the time agriculture was first adopted by early tribes and probably preliterate times.

Much of”harvest festivals involved presentation of gifts to deities as a sacrifice and in thanks for a bountiful crop yield. The religious connotations cannot be denied, and probably the biggest portion of these earlier harvest festivals was devoted to the giving of thanks to whatever deity was involved.

This kind of celebration was widely held around the world long before the Pilgrims came to what is now America, and the themes are surprisingly similar across cultures.

The Pilgrims did not invent “Thanksgiving” but merely adopted an old custom that already existed. Perhaps by now it has been raised to an art form, but the spirit of Thanksgiving was part of the human psyche rooted in the very dim past.

“Our harvest being collected our governor sent four men fowling together so we might rejoice together in a more special way after we had gathered the fruit of our labors. In just one day the hunters killed as much fowl as … fowl fed the company almost a week… Many of the Indians joined us including Massasoit, the greatest king, and some ninety of his men. We all entertained and feasted together for three days. The Indians went out and killed five deer which they brought to the plantation … And although it is not always as plentiful as it was at that time, yet by the goodness of God we are so far from want…”

Thanks SeekAndFind. This isn't the regular weekly Digest ping (that will be in a couple of days), but Happy Thanksgiving, all.

I don’t understand where the Puritans came into the Thanksgiving feast we honor today. Both groups had their own land and religious ideologies and didn’t share the feast.

The Pilgrims were Separatists, the Puritans were non-separating Congregationalists — they believed the Church of England was the one true church and they were loyal to England, but not in the way they worshipped. They believed that “New England” worship and practice would be an example for Old England and the world.

The Pilgrims were few in number. 102 sailed across the Atlantic on the Mayflower. About half died the first winter. The Puritans came by the thousands, indeed forty to fifty thousand eventually came. By 1776, 75% of the American population were of Puritan roots.

The Pilgrims settled in Plymouth. The Puritans settled in Salem and Boston starting about 10 years later. Can you help me here, please?

Nice story but the Pilgrims were NOT the Puritans.

Actually it was based on Sukkot which is one of the seven feasts of the Lord in the Torah.

The Puritans were serious students of the Old Testament; at one time they seriously considered making Hebrew their official language.

Puritans sure weren’t my forefathers, something for which I’m grateful.

And contra the confusion of Richard Land, the 1621 bunch weren’t Puritans, they were Pilgrims. The obnoxious Puritans didn’t show up for another decade.

And if we want to point to the first Thanksgiving celebration in the nascent United States, it happened down in Virginia among my Jamestown ancestors, despite four centuries of Fake News from New England:

“In 1619 the Good Ship Margaret landed at Berkeley with thirty-six men aboard. In accordance with the instructions given in the charter by the Virginia Company, these settlers observed the first official English Thanksgiving in the New World...”

10 posted on 11/28/2019 12:10:19 PM PST by Pelham (Coup d'etat tickets available, dial 1 800 Obama)
[ Post Reply | Private Reply | To 1 | View Replies]
To: alloysteel
One of the beauties of Japan is they have kept traditional festivals alive such as this autumn festival, the Karatsu Kunchi held in Kyushu first week of November. 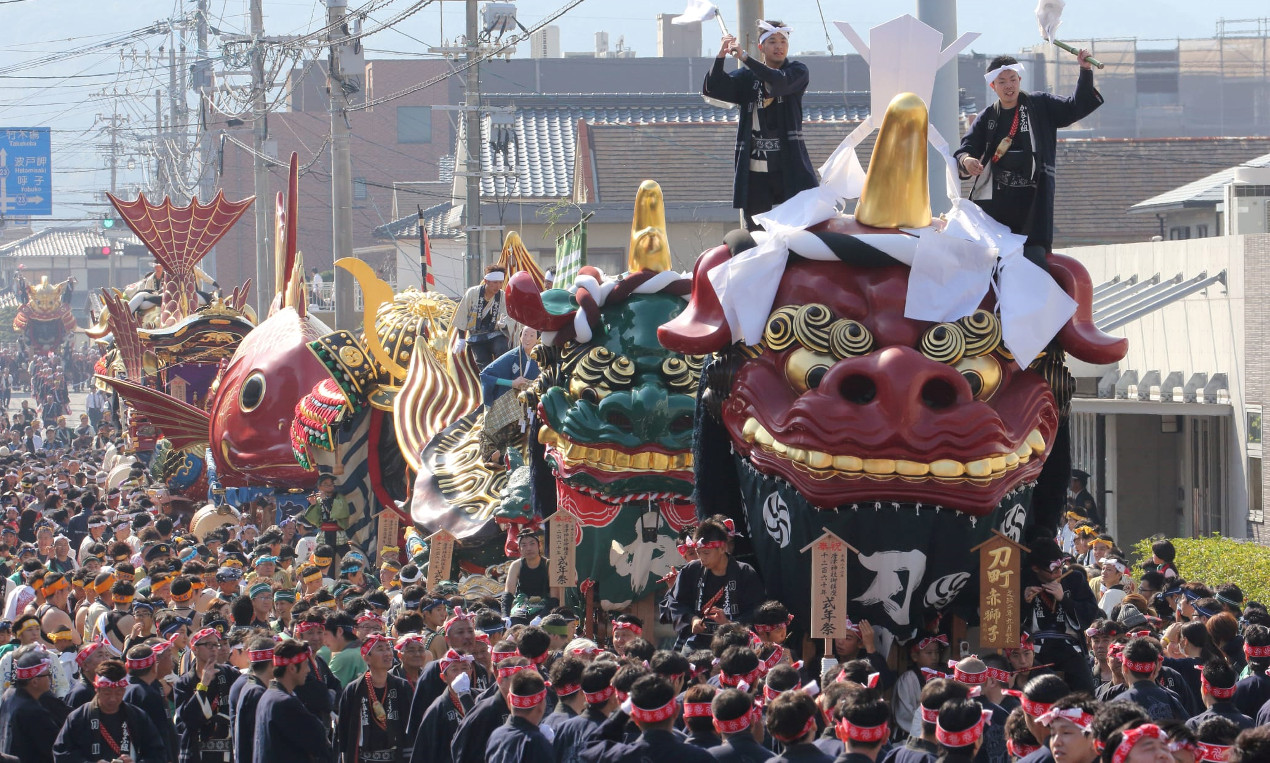 England has had Harvest Festivals going as far back as the Pagan Era.