J.K. Rowlings Books Burned or Banned Around the World Over Her Personal Views Of Gender
Jonathan Turley ^ | 09/21/2020 | Jonathan Turley

Many are learning the truth of that line written by famed author JK Rowling as self-described progressives burn her books or ban them from shelves because she personally holds an opposing view of gender. Much like the boycott movement of Chick-Fil-A over comments by its CEO, people are seeking to punish Rowling through attacks on her literature.

We previously discussed the embracing of art destruction as analogous to book burning, but now actual book burning is being embraced as a weapon of the woke.

A TikTok series show people around the world burning copies of Rowlings’ books. In one video of a burning pile of books by TikTok user @elmcdo, a voice is heard saying

“You have to stop using ‘death of the author’ as an excuse to have your cake and eat it too. While the reader’s perspective is an important part of interpretation and meaning, it is impossible to completely divorce a work from its creator. The positive impact that J.K. Rowling’s work had on millions of readers does not negate how her hateful lobbying has affected the trans community.” 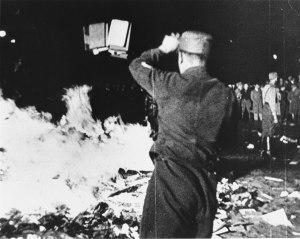 That sums up the logic of every book burner in history. You cannot read a book because of the views or religion or identity of the author. It is better to burn the book to protect society.

Then there is Rabble Books and Games in Maylands, Perth. The owner owner Nat Latter proudly declared on Facebook that he had removed all of the Harry Potter books from bookshelves to guarantee “a safer space for our community.” So you can buy a Rowlings book by having it retrieved from behind the back room like pornography. It is a form of censoring by making it more difficult to buy some books rather than others because you disfavor authors with opposing views.

Latter seems to relish the role of a book censoring book seller:

“Whilst stocking a book isn’t an endorsement (good grief, that would be a minefield), and we will always take orders for books that aren’t in stock, there are more worthy books to put on the shelf, books that don’t harm communities and won’t make us sad to unpack them.”

Does Latter also hide works with opposing views on gender from the Bible to the Koran to classic novels? Indeed, why not pull all of the work of authors like Hemingway and others for their views of women or race relations or other issues? Book sellers used to be people who wants to be gateways to knowledge and a world of different ideas and values. Now readers are being protected from even seeing the name of an author who personally holds opposing or offensive views.

What is most disturbing is not the flawed rhetoric of these individuals in justifying book burning and speech regulation but the relative silence from communities as a whole. We have seen increasing pressure to regulate art based on the identity or gender of artists. Authors often hold unpopular views from society as a whole. Many are deeply religious or hold narrow views of certain social institutions or rights. These views are often not reflected in their art or writings. Indeed, Rowlings is viewed as extremely liberal but holds a narrow view of gender. We can debate her on those views and denounce those that we find hateful or intolerant. However, burning or banning or hiding books (or destroying art) is the ultimate attack on free speech. It is the signature of oppression from the China’s Qin Dynasty to the Nazis to Southern segregationists. Saying that you are different because you are acting in defense of others is a transparently weak rationalization. Declaring intolerance in the name of tolerance captures the very illogic of book burning.

Thankfully, this remains a small minority of activists but there is a more pronounced anti-free speech movement growing in this and other countries.

These actions only prove again what Albus Dumbledore said (and J.K. Rowlings wrote): “Dark times lie ahead of us and there will be a time when we must choose between what is easy and what is right.”

Enjoy the world you helped to make, J.K.

Ironic that she used her initials at first to conceal her gender from readers.

The people, who burned her books because they supposedly “promoted witchcraft” just struck me as ridiculous fringe elements (since JKR has stated in interviews more than once that she was no more promoting actual “witchcraft” than she believed CS Lewis or JRR Tolkien were - likewise, having read her books, I never thought them any more than fantasy). However, I find the current book-burnings, and the stated reasons for doing so not only FAR from ridiculous, but in actuality, I find them chilling from the standpoint of being directly aimed at cherished freedoms of speech, and artistic expression.

While I understand your thinking, I always welcome a person who is willing to stand on principle. While she doesn’t need the left financially socially she has given up quite a lot....I respect her for that!!!

“Much like the boycott movement of Chick-Fil-A over comments by its CEO, people are seeking to punish Rowling through attacks on her literature.”

The linked article here does not mention or support boycott of CFA over its CEO’s comments. Instead, it refers to this about CFA at the San Antonio airport:

All Rats and a surprising many here are A-OK with the CEO’s comments to tell us we should be washing black people’s feet, because after all, it’s a great chicken sandwich!

Let it serve as a lesson to all of those who would be “woke”.

Eventually, they will come for you.

Did they buy them first before they burned them , LOL

7 posted on 09/21/2020 7:36:11 AM PDT by butlerweave
[ Post Reply | Private Reply | To 1 | View Replies]
To: dfwgator
I remember when Rowling used to be a "darling" of the Left, back when she stated one of her characters was homosexual (Prof. Dumbledore if I'm not mistaken). She thought she'd throw them a bone and get in their good graces.

Just goes to show that you never bend a knee to the rage mob. Never. For the demands will never cease and once you have a misstep, they will go all out to destroy you for getting out of line.

I am sure the author (or her agent) is ecstatic.
How could she possibly get better publicity?
The royalties for the books is a small bonus.
BTW, she already has “Eff You” money from the Harry Potter series.

So now I’ve gotta buy whichever ones my grandkids don’t have yet. It’ll probably have to come out of my beer budget!

Sex, there are TWO, male and female.

“Over Her Personal Views Of Gender”
—
That there is male and female is not a “personal view”. It’s an objective scientific fact.

Why don’t transsexuals ever have transitions to one of the other 56 genders?

15 posted on 09/21/2020 8:11:02 AM PDT by dsrtsage (Complexity is merely simplicity lacking imagination)
[ Post Reply | Private Reply | To 14 | View Replies]
To: SeekAndFind
That sums up the logic of every book burner in history. You cannot read a book because of the views or religion or identity of the author. It is better to burn the book to protect society.

I would not push this logic too far if I were them.

It is also the same sort of logic that rounded up homosexuals of all flavors, especially transgenders at the library reading books to small children, and then removed them to protect society.

Silly fools. No one has forgotten this except for those who now whine the loudest about how unfair the world is today.

But I thought “dumbledore” was “gay!” Shouldn’t she get a free pass?

I love the binarity of the Wuhanflu!
Why Covid-19 is different for men and women

J.K. Rowling did not get the message, you are not allowed to get off the lunatic train.