All they had to do was make average tasting cookies at competitive prices.

Instead, Chips Ahoy decided it’d be a good idea to do this. 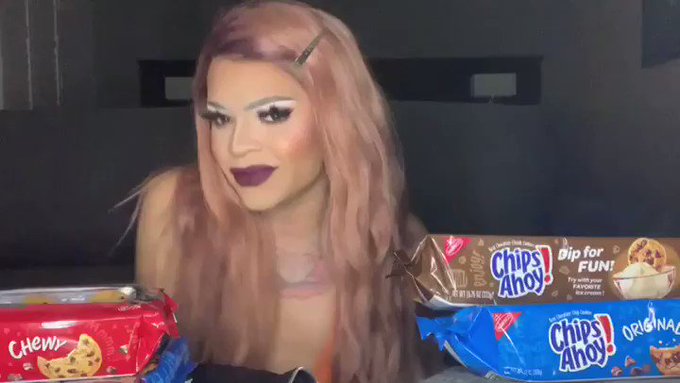 I’m not even sure what this is supposed to mean. Even if someone believes being a drag queen makes a man suddenly become a woman, they don’t become suddenly become a mother in the process. That’s kind of separate aspect of feminism that you can’t just appropriate. Also, aren’t drag queens a different thing than transgenders, i.e. they don’t claim to be the opposite sex? None of this makes any sense.

There’s also the fact that “Vanessa Vangie” is a pretty vile human being and I’m not talking about his penchant for dressing in drag. A quick search of his Twitter account will show he’s probably not the kind of person you want promoting your cookie company.

For the life of me, I can’t figure out why corporations do this. It’s just stupid from a business perspective.

Or is this some subtle sophisticated way of eliminating the "frozen vegetables", getting them hooked on this high sugar processed crap so the type 2 and obesity epidemics affect them, too?
1 posted on 05/12/2019 7:22:15 PM PDT by Impala64ssa
[ Post Reply | Private Reply | View Replies]
To: Impala64ssa

My family no longer buy cookies, we make them ourselves. Tried and true Toll House Cookies are still among the best out there.

maybe there is subliminal messaging with the drag queen and the wording on the specific packages they chose to use int he commercial?

Otherwise I have no idea why they would use that guy dressed like that in commercial. Chips Ahoy spent time and money deciding to do this so there had to be some real reason for it.

Not a big fan of cookies made by the large American made brands. Bakery style or homemade tastes way better.

Great. Now guess what will cross our minds next time we see those chips sticking out of the cookie?

Chips Ahoy probably has some homosexuals working for them
in mid and upper management positions in their marketing
department. And now they are making decisions concerning
the type of ads Chips Ahoy produces.
These sorts of hiring decisions will show.
Homosexuals are obsessed, twisted people.

WalMart has a Chips Ahoy taste-alike at a good price.

sure there is a reason... someone there want to jamb the freak show life style down normal peoples throats... plain and simple!

The last batch of chocolate chip cookies I made were awesome. Old school recipe and ingredients, just like Ma’s.

Not the “Chips Ahoy!”
.
I heard Budweiser was
“Coming Out” with a
Rainbow Can...
.
I’m going to Bolivia
And be a Monk.

Don’t understand why anyone ever ate these things anyway.

Dry, HARD as rock, and brittle - never mind the so-so taste. The texture is so bad I eschewed them since childhood.

Nabisco makes most of it cookies in Mexico nowadays, Keebler is US made. And there is Little Debbie, owned by a Adventist family.

The Chips Ahoy twitter account is being all sassy and defensive in its replies to those who criticized that tweet. For example, someone says “vomit” and the Chips Ahoy account says “they should get that checked out”.

Basically, this is what you get when you let leftist millennials do your advertising and run your Twitter accounts. They make commercials they’d like to see without serious consideration for what makes sense for the product itself. A drag queen from Ru Paul’s Drag Race (an adult TV show) is not a good face for crappy cookies that go into a lunchbox.

18 posted on 05/12/2019 8:39:42 PM PDT by Stravinsky
[ Post Reply | Private Reply | To 1 | View Replies]
To: Impala64ssa
I’m not even sure what this is supposed to mean. Even if someone believes being a drag queen makes a man suddenly become a woman, they don’t become suddenly become a mother in the process.

Maybe there's something in their cookies that screws around with people's hormones.

too many companies are destroying their business by catering to sick people instead of the public- goodbye converse! Last pair of sneakers i buy from you!