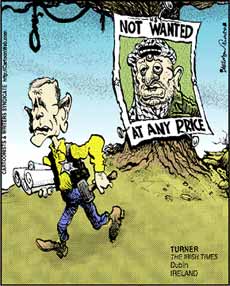 This past week, the Palestinian Authority's top accountant told The New York Times that the P.A.'s finances are "a mess."

Think you have trouble sorting out your investments?

According to Salam Fayyad, the gun-toting kleptocracy that has raked in billions in foreign aid over the last decade has invested money in at least 79 different "enterprises."

Fayyad is the former International Monetary Fund official who has been appointed to help the P.A. comply with demands by both the United States and Israel that its administration be reformed. With the help of some money that the United States has pressured Israel to give to the Palestinians, Fayyad promises to help clean things up and start the P.A. on the road to fiscal sanity and good government.

All this is intended to dampen cynicism about the Palestinians and remove any impediment to the flow of American, European and Israeli cash to Arafat Inc. Those who choose to believe this may now take their rose-colored glasses off and adjust to the normal light of day.

By a fortunate circumstance, the very same week that the P.A.'s reform offensive started paying off in sympathetic articles in this country, Forbes magazine published its special annual issue detailing the richest people in the world. As it happens, among those making the list is none other than Yasser Arafat.

In the list Forbes kept of the richest "Kings, Queens and Despots," the 73-year-old Arafat was noted as being in the possession of "at least" $300 million. While this tidy sum wasn't in the same class as the King of Saudi Arabia's $20 billion and the Sultan of Brunei's $11 billion, it did put him ahead of Queen Beatrix of the Netherlands' $250 million and the Cuban dictator's $110 million.

Fayyad told Forbes , "I'm here to tell you that it's not Arafat's money anymore."

If so, then Fayyad is a mortal threat to Arafat's power, but as the Palestinian bean counter admitted, Arafat "is the person who appointed me." According to Forbes, Israeli intelligence estimates that Arafat's personal wealth is actually much higher: $1.3 billion, a figure that would put him ahead of the likes of Oprah Winfrey, but still behind fellow dictator Saddam Hussein's $2 billion.

In 1990, according to press reports, the CIA estimated that Arafat had between $8 and $14 billion in assets. In 1995, the General Accounting Office compiled a report on Arafat's money, but it was never released because the Clinton administration deemed its results a threat to "national security interests."

How does Arafat spend his money?

It must be admitted that it isn't on clothes. A good deal is being spent to keep his wife and daughter in their luxury bunker in Paris, but the amount he spends keeping Suha in French groceries and haute couture is chump change compared to the cash he distributes to his terrorist followers.

As has been previously reported elsewhere, like many other really rich guys in the Forbes spread, Arafat is a hands-on CEO. He signs off on every expense outlay in the P.A., including payoffs to suicide bombers and purchases of Iranian arms for use in the Palestinian "intifada."

While speculation about Arafat's money has some pure entertainment value, it does have a direct correlation with another important recent news item: President Bush's speech last week in which he set forth this country's vision for the Middle East after the presumably successful conclusion of a war against Iraq.

Bush's Feb. 26 address to the American Enterprise Institute eloquently set forth a rationale for war against Iraq. The United States, Bush said, intended to address the "freedom gap" in the Arab Middle East. Ousting Saddam Hussein's regime in Iraq would not only remove the threat of his aggression and pursuit of weapons of mass destruction. It would, Bush believes, also set off a chain reaction of democracy that would sweep the region.

More specifically, the president thinks the demise of Saddam can "begin a new stage for Middle Eastern peace, and set in motion progress towards a truly democratic Palestinian state."

Seizing on the connection between Saddam and Palestinian terrorism, the president predicted that "the passing of Saddam Hussein's regime will deprive terrorist networks of a wealthy patron that pays for terrorist training, and offers rewards to families of suicide bombers. And other regimes will be given a clear warning that support for terror will not be tolerated."

All this would lead, Bush says, to the creation of a Palestinian state that would be democratic, have accountable leaders and be "a reformed and peaceful state that abandons forever the use of terror." In exchange for this, a secure Israel will make concessions that will allow this new Palestine to come into existence.

This is very much in line with his June 24, 2002 speech in which he clearly stated that any move towards a Palestinian state had to be predicated on Arafat's ouster and the transformation of the Palestinian entity.

Bush's left-wing critics dismiss these statements as mere window dressing intended to put a humanist face on geostrategic power politics. Some, such as Akiva Eldar of the Israeli newspaper Ha'aretz, claim that in articulating these principles Bush has effectively joined hands with Israeli Prime Minister Ariel Sharon and his "right-wing" government and doomed any chance of accommodation with the Palestinians. The remnants of the Israeli left still think anyone who opposes appeasement of terror and expects the Palestinians to behave in a civilized fashion is nuts.

In the list Forbes kept of the richest "Kings, Queens and Despots," the 73-year-old Arafat was noted as being in the possession of "at least" $300 million.

How much money has Arafartty invested in the NY Slimes, ABCNNBCBS, Reuters and the other anti America/Israel propaganda mills to keep this vile data secret and spiked?

3 posted on 03/11/2003 6:15:41 AM PST by Grampa Dave (Stamp out Freepathons! Stop being a Freep Loader! Become a monthly donor!)
[ Post Reply | Private Reply | To 2 | View Replies]
To: SJackson
A good deal is being spent to keep his wife and daughter in their luxury bunker in Paris, but the amount he spends keeping Suha in French groceries and haute couture is chump change compared to the cash he distributes to his terrorist followers.

Suha, you never call anymore! Was it something I said?