The case against the politician's friend has been shrouded in secrecy.

After a year of secrecy and mystery, the public is about to start seeing records connected with the investigation into the killing of former Arkansas state Sen. Linda Collins-Smith.

During a lengthy pretrial hearing Friday in Pocahontas, Arkansas, Judge John Fogleman said in the coming days he would be unsealing at least 51 documents filed by investigators and prosecutors under one of the strictest gag orders ever seen by legal observers in Arkansas history. Fogleman did not say when he would be releasing the documents or how many pages.

"People need to be able to see what's going on," Randolph County Sheriff Kevin Bell, who's running the homicide investigation, said in an interview after court.

The judge's order followed a decision earlier this year to modify the gag order in the case and restrict how much the authorities could do without the public and the media having access. His decision came after ABC News and the Arkansas Press Association sued for access to the records.

Collins-Smith, 57, disappeared in May 2019 and her bloody body was found on June 4. Within days, authorities arrested Rebecca O'Donnell, 49, a longtime employee and friend of Collins-Smith, and charged her with murder. Prosecutors are seeking the death penalty against O'Donnell, who helped manage Collins-Smith's personal finances and motel business. 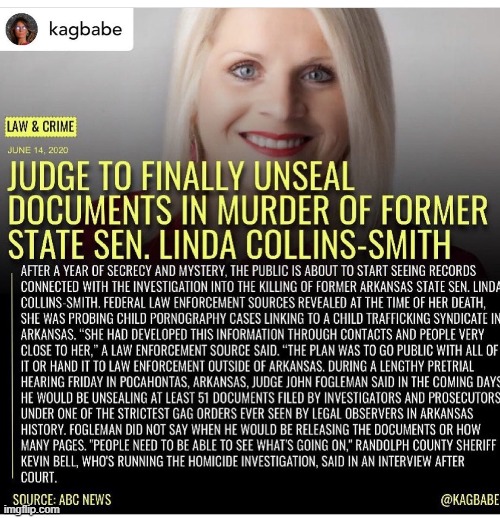 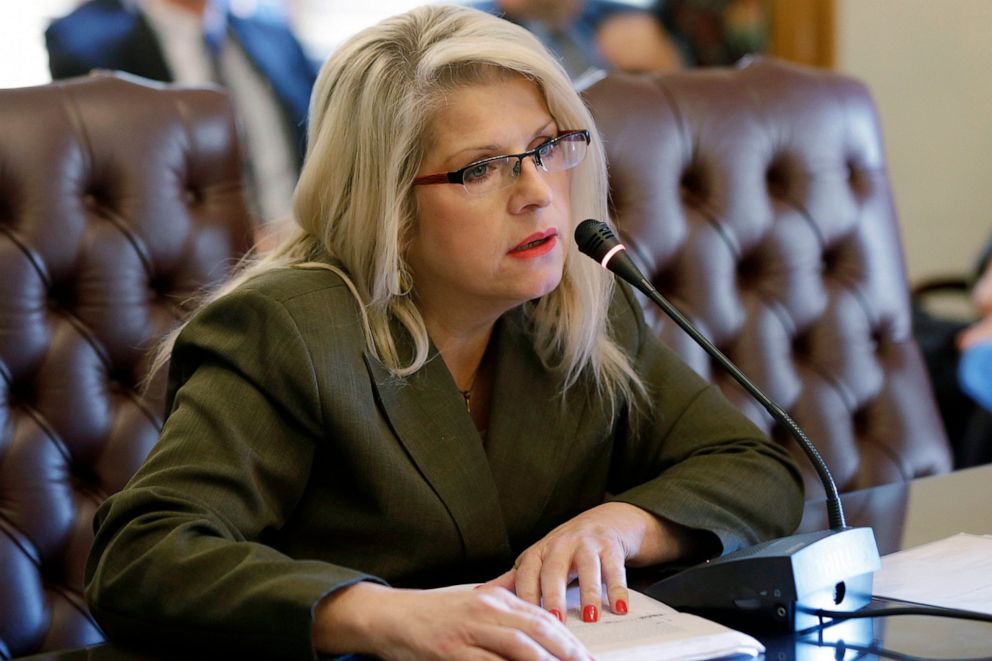 Unlike my usual check of posts, I actually read the whole article. No mention of political party. 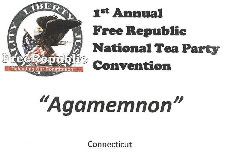 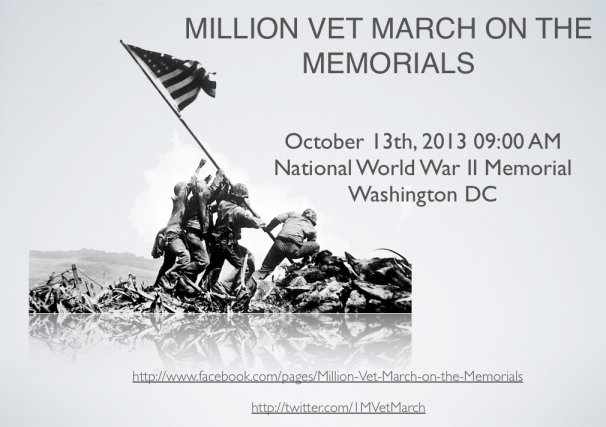 Why the secrecy? Is there a Freeper lawyer who could explain this?

10 posted on 06/16/2020 8:54:56 AM PDT by wintertime ( Behind every government school teacher stand armed police.( Real bullets in those guns on the hip!))
[ Post Reply | Private Reply | To 1 | View Replies]
To: bitt
(from the article) :" ..O'Donnell, who helped manage Collins-Smith's personal finances
and motel business."

Since Collins-Smith was planning on soon disclosing a pedophile ring, possibly in Arkansas,
one has to wonder if O'Donnell had a financial interest in managing the motel operations and rooms for pedophiles.
The arrest for murder includes a charge of 'abuse of corpse'.
The fact there was a 'strict gag order' issued, suggests that the crime may involve the 'power establishment' in Arkansas,
especially since three prior justices recused themselves, prior to assignment to this judge.

Child trafficing by far the most likely reason.

12 posted on 06/16/2020 9:03:43 AM PDT by veracious (UN=OIC=Islam; USgov may be radically changed, just amend USConstitution)
[ Post Reply | Private Reply | To 11 | View Replies]
To: Agamemnon; wintertime
From post #7 article :
"CPS and child sex trafficking has become one of governments dirtiest little secrets ever since the Safe Families Protection Act of 1997 signed into law by then president Bill Clinton in which the federal government in effect paid bounties to the states for every child removed from a loving home and put up for adoption... a polite euphemism for the child trafficking pipeline."
13 posted on 06/16/2020 9:04:27 AM PDT by Tilted Irish Kilt
[ Post Reply | Private Reply | To 7 | View Replies]
To: nwrep

Wasn’t another gal murdered that was looking into Child sex trafficking also? 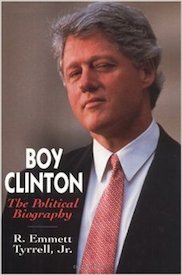 If the Clintons were involved it would have been done by pros with no evidence.

Well, if you’re already likely heading to death row, what have you got to lose? Why not try to put out a hit on the judge?

What are they going to do? Execute you twice?

You can bet the farm that one Clinton or two damn Clintons are involved in one form or the other up to their eyeballs.

You can bet your last penny that the Clintons knew about. And, in my opinion, are involved someway.When God punishes a Nation, He inflicts a bill or Hillary Clinton on them.

I remember someone else. I vaguely remember a youtube clip of her walking on a street and talking. I had forgotten about her.

It is STUNNING how much you forget about the crimes of the left. Every now and again something causes me to remember something, as you just did. Wasn’t she found dead in her hotel room? They blamed it on something ridiculous.