Trump's right about Islam but needs to add this
americanthinker.com ^ | Mark Christian, M.D.

CNN’s “Silver Fox,” Anderson Cooper, went fishing with his best “gotcha” lure in his recent interview with Donald Trump, only to have his lure bitten off the line and tossed back on shore without bait, or fish.

“I think Islam hates us,” was Trump’s response to Cooper’s rather clumsy attempt to get “The Donald” to lump all Muslims together into some jingoistic, bigoted meatloaf on which the media and the DNC could feast.

Trump ignored the bait and countered by suggesting the media do their job (gasp!) and determine the difference between radical and moderate Islam for themselves, rather than trying to bait candidates based on preconceived notions of bigotry.

In fact, Trump’s answer is accurate in general terms – the 30,000-foot view, if you will – but would do well with an explanation as to why.

The concept of “radical Islam” as our enemy is an egregious misnomer. A far more appropriate (and accurate) appellation would be “devout Islamist,” which is more reflective of the motivations of those who seek to place the entire earth under the heel of Shariah.

Jihad is waged for the purpose of creating Allah’s kingdom on earth, which requires the submission of the earth and all in it to Islam. In and of itself, this is not a problem to society at large, until you add in the religious duty of all Muslims to exercise any and all means to achieve this goal – including extreme violence against innocents.

“”I have to assume that most Ds think that all Muslims hate us and want to kill us.””

Certainly not any democrats I’ve seen or heard...how many times do we have to hear “we are not at war with Islam?” Is that not from democrats? They will stumble over the bodies to protect them and deny they are evil...

“”They must denounce Sharia, violence, anti-semitism, the destruction of other religions, the Jizya, sexual slavery, rape and not seek political control through Islam of nations in which they live.””

Thanks...I’ve never run across anything by him until now and I appreciate your post....

Muslims move in and the level of rape explodes... every time... and these are the “GOOD Muslims”, not your “non-Islamic Islamic terrorists”. Discuss THAT, Cooper

That said, I think there are already laws which will apply to islam. For example...

Whoever, with intent to cause the overthrow or destruction of any such government, prints, publishes, edits, issues, circulates, sells, distributes, or publicly displays any written or printed matter advocating, advising, or teaching the duty, necessity, desirability, or propriety of overthrowing or destroying any government in the United States by force or violence, or attempts to do so; or

Shall be fined under this title or imprisoned not more than twenty years, or both, and shall be ineligible for employment by the United States or any department or agency thereof, for the five years next following his conviction.

If two or more persons conspire to commit any offense named in this section, each shall be fined under this title or imprisoned not more than twenty years, or both, and shall be ineligible for employment by the United States or any department or agency thereof, for the five years next following his conviction.

This law alone would stop the practice of islam in a way that encourages the establishment of sharia law over existing law by jihad.
25 posted on 03/13/2016 9:52:21 AM PDT by RoosterRedux (When a man loves cats, I am his friend and comrade, without further introduction. - Mark Twain)
[ Post Reply | Private Reply | To 19 | View Replies]
To: aquila48
Yes.

It is a common practice for Christian converts from islam to adopt a Christian name.

But wouldn’t the first amendment trump all those laws, since it is the Constitution - the law that trumps all other laws?

At best it would be a contradiction.

I firmly believe that that is our biggest problem with Islam.

We cannot fight it like we fought nazism or communism because as it is currently written our own constitution forbids us from fighting it.

For us it’s hard to come to grips with the realization that our most cherished and idealistic “right” as written is flawed, but if we don’t the Islamists will take over, or there will be a revolution.

In an ideologies the ideology cannot take hold until action is put behind the words. Islam is a theocratic political ideology bent on world domination to supplant the ideology, laws and idiosyncrasies into every ones minds and lives. Co-founder to CAIR (the acronym was purposefully selected to sound like care, and I am paraphrasing here) said that Islam was not in America to be any other religion but to be the dominate religion and the quran the constitution. This very statement by the co-founder, who is currently in jail for something totally unrelated, is seditious in nature. This bespeaks the intentions of the ideology that it seeks to overthrow our current form of government and its people like the co-founder of CAIR who puts that ideology into action. Everyone says we must ban Islam and I turn to them and ask have we banned Nazism? Have we banned Communism? These too are theocratic ideologies that we can no more ban than can we make the sun go dark. As long as they reside inside the minds of those who will promulgate them to others who are of weak mind or seek out acceptance in today’s world of isolation, we can not ban them nor can we ever destroy them. It will take thousands of years from now for them to even be forgotten but with the advent of more and more history being recorded than ever before, Islam will never ever go away, like Nazism or Communism and that my friends is the sad god’s honest truth. There will be flare ups and then they will be put down as the embers glow until they are kindled again causing another flare up of their vociferous flame. Only can we trample the fire but never the coals.

28 posted on 03/13/2016 10:39:01 AM PDT by zaxtres
[ Post Reply | Private Reply | To 12 | View Replies]
To: aquila48
I am not a lawyer but I would think that the adherents of any "religion" that encouraged the breaking of the law could be prosecuted to the extent they break the law or aid, abet, and encourage the breaking of the law and that would either stop the practice of that religion altogether or cause a reformation which included the dropping of those parts which were troublesome.

As to your comment about how we fight it, I completely agree.

It's not just a military conflict but a cultural, ideological, and metaphysical/spiritual conflict to boot.

I am one of those nuts who believes islam is a demonic force.;-)

The war against islam is truly a war between good and evil IMHO.

Many muslims are deeply and profoundly brainwashed by the ritual practices required by islam and breaking them free of its influence will require some serious deprogramming and even that may not consistently work.

2. How Does Shariah Define Jihad?

5. Taqiyya – A Concept of Deceit that Security Professionals Must Know

6. Slander – How it is Used and Abused Under Shariah

7. How Shariah ‘Blasphemy’ Laws are Being Imposed On Us

8. What is the Muslim Brotherhood and How Does it Operate?

9. Genesis of the Muslim Brotherhood

10. Movement of the Muslim Brotherhood into the West

12. The Muslim Brotherhood in America

13. The Holy Land Trial: On the Trail of the Muslim Brotherhood

15. Penetration of the US Government: A Case Study

16. Mapping the Muslim Brotherhood in America

17. Who’s Who in the American Muslim Brotherhood 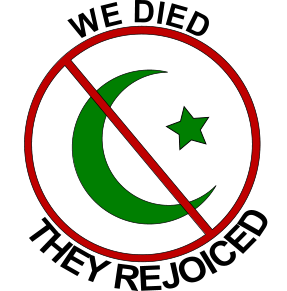 Feel free to copy this info and spread it to other forums.

Yep. Their goal is not peaceful coexistance.