Historians: Docs reveal struggle and resolve of the human spirit for freedom

Thousands of newly declassified documents about the Berlin Wall reveal the struggle and resolve of the human spirit for freedom, archivists and historians said on Tuesday.

The National Archives’ National Declassification Center (NDC) has released 11,000 pages of previously classified documents on activities in Berlin from 1962 to 1987—the years Presidents John F. Kennedy and Ronald Reagan delivered iconic speeches in the divided German city. The collection, culled from documents circulated by the U.S. Army, NATO, and U.S. government agencies, details the construction of the Berlin Wall and attempts by East Germans to escape to the democratic West.

The wall was originally built by East German authorities to stanch a massive “brain drain” of the Soviet-backed state’s most educated and skilled workers, said Neil Carmichael, an NDC director, at a symposium on the declassified documents.

It ended up having the opposite effect, Carmichael said.

“The [human] spirit is why the wall was constructed,” he said, referring to the millions of East German workers who left the communist state for freedom before 1961. “It was the spirit that would actually destroy the wall.”

While East German officials publicly referred to the fortification as an “anti-fascism wall,” West Germans called it the Schandmauer or “wall of shame” and compared it to a concentration camp, said Hope Harrison, associate professor at George Washington University and fellow at the Woodrow Wilson Center.

The wall also epitomized the dueling propaganda strategies of the East and West, Harrison said.

East German guards were perceived as martyrs and “heroes of socialism” if they died in cross-border shootings, while refugees were derided as traitors. The West, by contrast, held up those who died trying to escape as martyrs and left crosses and flowers near the wall to publicize their deaths as much as possible.

Harrison recounted some of the stories now more fully revealed in the documents of those who died attempting to flee East Germany.

Günter Litfin, a 24-year-old who worked as a tailor in West Berlin but lived at an apartment on the East side, awoke the morning of Aug. 13, 1961, to find barbed wire and armed guards separating him from his livelihood.

Enraged, Litfin resolved to escape and chose a narrow canal. He became the Berlin Wall’s first shooting victim 11 days later when he attempted to swim across and join the hundreds of horrified onlookers on the West side. His mother in East Berlin learned of his death on West German TV while the Eastern press reported that a criminal had been killed in a confrontation with border guards.

Peter Fechter, 18, drew widespread international attention when he was shot the following year. Fechter attempted to cross the border zone near Checkpoint Charlie with a friend but was shot and fell as his friend made it across. He laid in “no man’s land” for 50 minutes and eventually bled to death before the East German guards retrieved his body.

Harrison said Tuesday would have been Fechter’s 70th birthday, which will be commemorated in a new memorial at a Berlin cemetery.

The deaths continued up until Feb. 6, 1989, when 20-year-old Chris Gueffroy was shot after he hit a silent tripwire that alerted the guards. Gueffroy was the last of the roughly 138 people who died trying to cross the Berlin Wall before it fell on Nov. 9, 1989.

While the deaths of those who failed to escape are commemorated, there were also amazing success stories. Some 40,000 East Germans successfully escaped. More than 200 crawled their way to freedom in 3×3-foot tunnels, painstakingly dug under the wall, that could be flooded or discovered by East German guards at any moment.

The historians said the bookend of the declassified documents was Reagan’s historic speech on June 12, 1987, in front of Berlin’s Brandenburg Gate. Although the speech is mostly remembered for Reagan’s declaration that Soviet leader Mikhail Gorbachev should “tear down this wall!”, they noted his portrayal of the East-West divide in Berlin as part of a larger ongoing struggle for human freedom.

“As long as this gate is closed, as long as this scar of a wall is permitted to stand, it is not the German question alone that remains open, but the question of freedom for all mankind,” Reagan said. “Yet I do not come here to lament. For I find in Berlin a message of hope, even in the shadow of this wall, a message of triumph.”

Jeepers, I know that in the scheme of things that all the deaths were terrible, but how would you like to be known as the last guy to be shot in 1989?

Climbed onto the Berlin wall once on the Western side once to get a peek. ..Actually there are two walls and a no-man’s land.

No more so than the first or last in any conflict.

Glad you are back. Loved your home page.

How strange it must be to be on the front line of the fight against Communism, and then to see it take root in our own fair land.

” He laid in “no man’s land” for 50 minutes and eventually bled to death before the East German guards retrieved his body.”

The US could have attempted to send a military ambulance to attempt to retrieve him; it probably would have been
delayed or stopped by the guards. But, at least we could have made the gesture.
However, the State Dept. thought such a gesture would have been provocative, and so the ambulance wasn’t sent.

I had a cousin who went over the wall in the 60s. He was from Leipzig. He was younger then I was and I never met him. His sister and I used to correspond to each other and she told me about it. Of course they (my aunt) could not say much about it. Anyway I don’t know what happened to him

10 posted on 01/14/2014 6:41:44 PM PST by Kaslin (He needed the ignorant to reelect him, and he got them. Now we all have to pay the consequenses)
[ Post Reply | Private Reply | To 3 | View Replies]
To: datura
You should have picked up some very inexpensive East German Zeiss binoculars in East Berlin while you were there. The selling prices on Ebay on some of them are several hundred $$ these days. No future, no hope in a communist economy.

Inside, the east, outside, freedom. Windows and doors were later closed with concrete.

The boy was caught on the wrong side of the wire when it went up. The guard was never seen again. So close to freedom. His buddy made it.

What have we done? 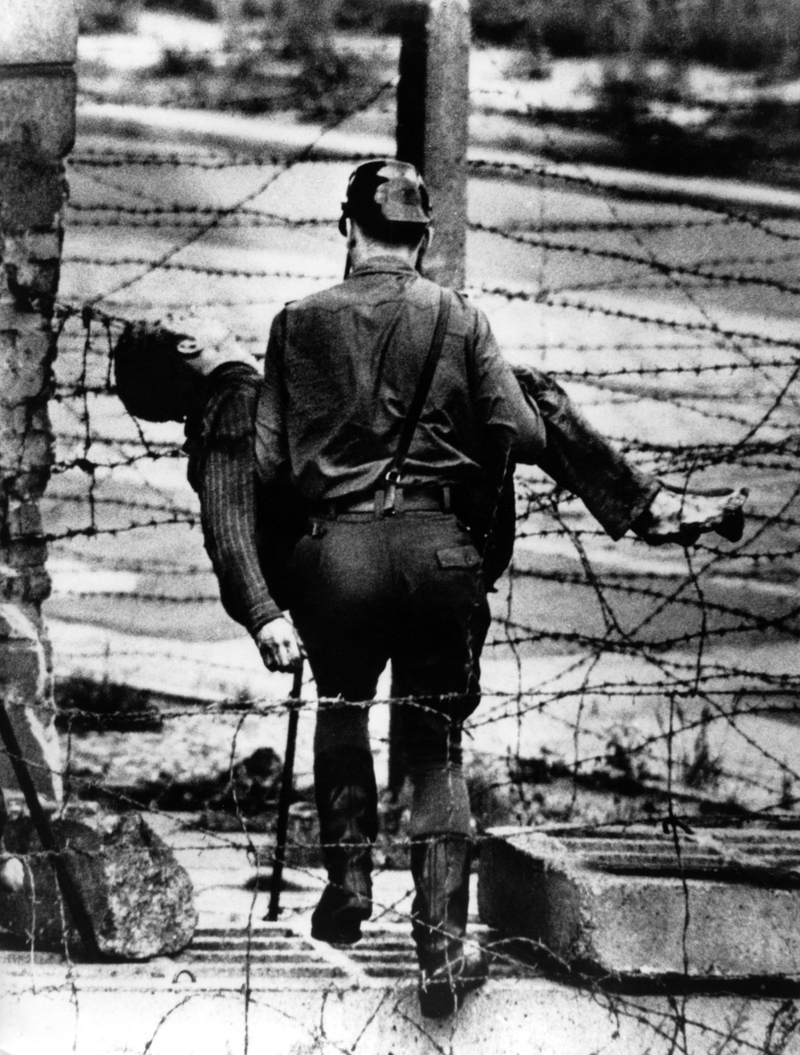 Now you are free forever. 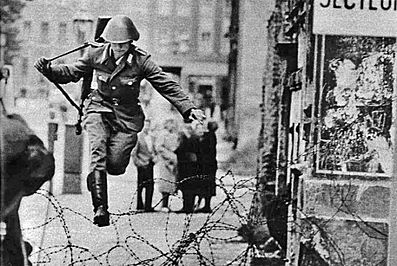 At least one who will not shoot at a fellow Berliner.